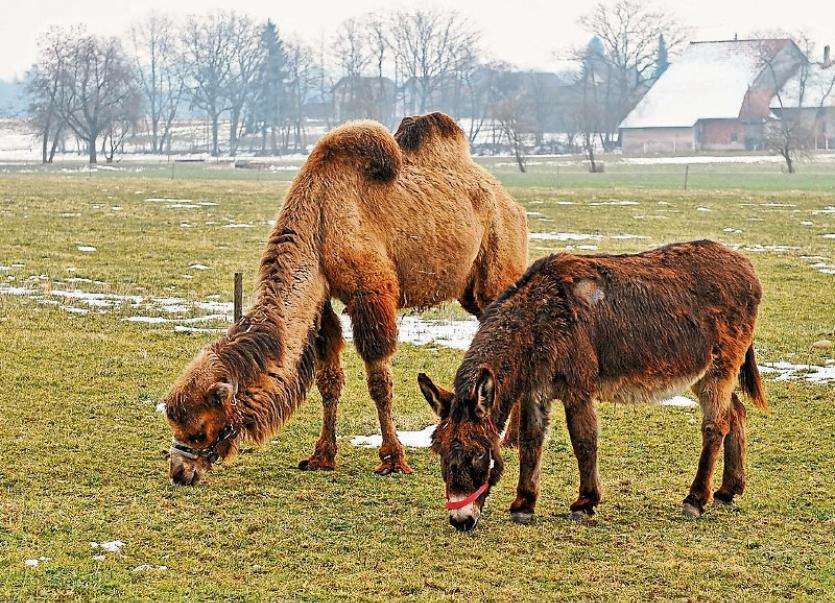 Camels in Duaggh, asses in Listowel, says one reader

Who trampled down the English flag,

The boys of sweet Duagh.

I AM taken to task by a Duagh exile, a schoolmate of mine from a best-forgotten era at St. Michael’s, Listowel.

“Dear Johneen, in your enjoyable article in last week’s Leader about my native village you neglected to mention our patriots, but I’ll forgive you for this because your grandmother came from Lyreacrompane and so did mine.

“Did we ever think and we sitting in the back seat of the Leaving class under Callagy’s watchful eye that I would one day be an exile and you a famous man? You were hopeless at maths and I was good at them so where did I go wrong? Keep up the good work.”

This particular Duagh exile need not be an exile any longer because it so happens there is a job in his native county to suit his particular talents.

There is a second letter concerning the camel which is buried at the side of the Church Road in Duagh.

I won’t quote from it, but the gist of it implies that only asses are interred in Listowel. Touché.

But let us drift down river from Duagh to Listowel where cuckoos abound at present. Some may claim that it’s no boast to play host to a horde of cuckoos but, when the trees begin to don their summer wear, cuckoos will come and there is nothing we can do about it.

First report concerning these migratory masters of merciless eviction comes from Jer Lynch of Affoulia and a bare two miles from Listowel.

Coolnaleen also, if one is to believe reports, is alive with cuckoos. Coolnaleen is in the parish of Listowel.

A nun of the Presentation Order also informs me that there are several cuckoos to be heard in the vicinity of the Convent Cross.

The Convent Cross, as I recall, was once famous for more than cuckoos and the poet Paddy Drury has mentioned it more than once in a derogatory fashion when refused drink in pubs contiguous to the Cross.

Those Greenville banks for flowers and moss,

The Convent Cross for pitch and toss,

And Bedford Road for asses.”

So sang the poet in his heyday when porter was only tuppence a pint and the bikini yet to be invented. I would not agree at all about his description of Bedford Road.

I have always found this place to be notorious for primroses and indeed I call upon readers to see for themselves by taking a stroll in that direction now that the days are expanding.

But I digress. Let us return to the cuckoo, derived, I believe from the Greek word, Kokuk, although I am open to correction here since it could be said that the name derives from the cry of the bird itself.

Is it true that there are more cuckoos in the vicinity of Listowel than anywhere else in Ireland and, if so, what is the reason? I will leave it to the reader to answer this question.

Now comes a broadside from my friend, Patrick Ahern, Carraigkerry’s redoubtable matchmaker. Patrick tells me that the two matches he had on his hands at the time he appeared on the Late Late Show are now resolved. Both couples are happily married so far.

Patrick also asks me to insert the following in as conspicuous a place as possible in my column:

From Carrigkerry too comes a cure for rheumatism. A certain widow woman and her only son lived together on a small holding in West Limerick. The widow was a martyr to rheumatism and most of her days were spent in suffering.

She was fired by a farrier and rubbed with lamp oil by a midwife but all to no avail. She travelled to Macroom in a common car drawn by a pony to a man by the name of Nagle who had a great reputation for curing pains, but it was a case of turas in aisce.

One night she had a dream that if she was taken to a certain graveyard at the hour of midnight and if she was conducted on a tour of the graveyard she would be cured for evermore.

She told her son of the dream but he took no notice at first.

However, when the dream recurred again and again, he decided that there might be something in it after all. He promised to take her to the graveyard.

Now the graveyard in question was said to be haunted. Mysterious cries were often heard by passers-by and equally mysterious shapes were seen by travellers passing at night.

The dutiful son wrapped his mother up in a sheet, put her up on his back and trotted off to the graveyard. He had made a half circle of the graveyard when the hour of twelve struck in a distant church.

Suddenly, as he passed a corner where some trees grew a man stepped from the shadows, skilfully brandishing a large knife.

“Fat or thin?” the son screamed in terror, “You can have her.” He dropped his mother and ran for his life. He arrived home, panting, and when he opened the door of the house who should be there before him but his mother. The fright and the running had knocked the rheumatism out of her. It never troubled her thereafter.

What transpired was this. Two sheep stealers were operating from the graveyard. One stole the sheep while the other, who waited in the graveyard with his knife, killed them.

From our venerable friend, Tom Shine of Glenquin, Ballaugh, where blooms the bonny bachelor and fair maids pine in the long wintertime, comes an account this week of a mule with a difference.

“Dear John B., I have a very true story to tell you about a jennet’s foal which is to be seen at Paddy Cronin’s of Raheenagh. He is bigger than any donkey, Spanish, Castlemahon or otherwise. He can haul up a ton weight on any road.

“Paddy is half afraid to tackle him although he is a big farmer and has plenty work for the animal. All he keeps him for is for pulling the tractor when it breaks down.

“There do a lot of people come to buy the animal but Paddy is slow to sell. If ever you are passing this way maybe you would call to see him and have his photo taken for the Leader. Paddy often rides him with the County Cork Hounds. This animal was trained by Dan Ahern, a great horseman. American papers, please copy. Yours forever, Tom Shine.”

The late, great John B Keane was a Leader columnist for more than 30 years. This column first appeared in our edition of April 21, 1973