Women unwilling to settle with a man in his 50s 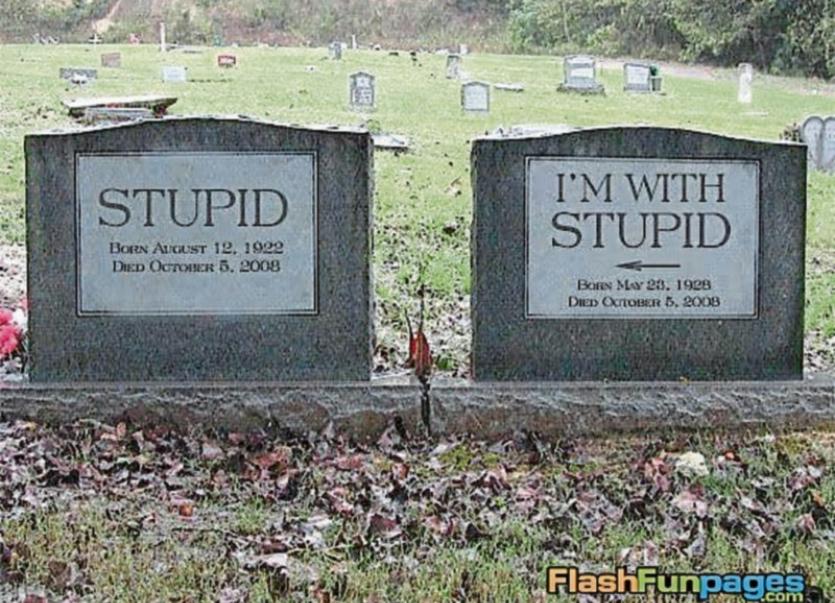 Headstones can be an unexpected source of humour

I WOULD like to serve notice upon bachelors everywhere who may have it in their heads to come calling on me during the remainder of the summer and for the duration of the autumn.

I recognise the distress that prompts such journeys, but for the past few weeks I am sorely addled by great numbers of wife-seeking unfortunates, so much so, that my time is no longer my own.

Therefore, it is my painful duty to inform all those honest men who have no women that it is not presently in my power to ease the situation.

Last Friday, without prior notice of any kind, a carload of gentlemen arrived all the ways from Galway.

They numbered five, and of the five, only one was unmarried. It was in relation to this man’s problem that the journey was made.

He was aged 55, and because his mother passed away shortly after St Patrick’s Day of this year, he is now free to settle down and get married, having as assets a house of his own, a 25-acre farm and £500 in the post office.

“You need more than that to get a wife,” I said.

“I have all it takes,” he told me. I didn’t doubt him but I told him as politely as I could that there was nothing I could do for him.

“Go,” I said, “and visit Patrick Ahern of Glensharrold in Carrigkerry. He is your only hope of salvation.”

On Friday night I was again visited by a party from Charleville.

The spokesman was a woman and the man for whom she wanted a wife was her brother.

Again the mother had recently died and he was anxious to settle down. He was outside in the car and too shy to come in, so would I come out and have a look at him and see what I could do for him.

After a lot of persuasion, he came in. He had little to say for himself but in the bar at the time were a couple of attractive girls wearing mini skirts.

The bachelor from Charleville couldn’t take his eyes off the girls.

Confidently, he turned over to me.

“There’s a score in it for yourself,” he whispered, “if you can get one of those for me.”

I told the girls what transpired and they screeched out with laughter ‘till they had to hold their sides.

The Charleville bachelor left in a huff, followed by the sister and her five children, who had come along for the ride.

From now until the last chestnut has fallen, and the salmon start to spawn, I will have these lonely bachelors calling on me.

As the winter approaches, the desire for female companionship of a permanent nature becomes overwhelming. One can read it in their faces.

Unless they are successful before the end of autumn, they will have to endure another winter without the whisper of a woman’s voice to wake them in the mornings, or the swish of skirts to remind them that they are not alone anymore.

As I have said repeatedly, it is fine for those who have women of their own.

To them it’s a bit of a joke, but for those who have no one to darn a sock or pat a pillow, it is far from being funny.

However, I must stress the fact that there is nothing whatsoever I can do. I have no women or knowledge of women who are willing to settle down with bachelors over fifty.

It’s tough but it’s really only “all going through life,” as the old woman said when she was carried away by the flood.

Maybe the women are there but, if they are, they are not showing themselves.

SOME TIME ago, as a result of reading an article of mine in the Limerick Leader concerning choice epitaphs in Glin and other graveyards, an Irish-American writer by the name of John Thomas O’Connor compiled a book of epitaphs, which will be published shortly in the United States.

“It was,” he writes, “after reading your epitaphs in the Limerick Leader, which my sister gave to me, that I decided to compile the book of epitaphs.”

Very kindly, Mr O’Connor sent a copy. From Llannelly, in Wales, comes one of the best. It is inscribed on a headstone erected to a wife:

“This spot’s the sweetest I’ve seen in my life,

For it raises my flowers and covers my wife.”

If ye saw him now ye wadna ken him.”

Of course, there is the epitaph of Martin Elginbroddie but, to the best of my recollection, we had it here before.

Then comes the delightful one to Mary Ann Lowder:

She burst while drinking a Seidlitz Powder.

Called from this world to her Heavenly rest

She drank it and she effervesced.”

From the States again comes the unforgettable John Racket:

In his wooden jacket

Kept neither horse nor mules

Lived a hog, died a dog.

Left all his money to fools.”

Her would if her could but her couldn't stay.

Her had two swoln legs and a baddish cough

But her legs it was as carried her off.”

SINCE THE letter requesting for an end to the stories of Joe Quaid appeared in the Leader a large number of unsolicited letters have come to hand. Every one of these letters is strongly in favour of Joe Quaid.

From a well-known County Limerick curate who used to be a good hurler comes the following:

“It would be a terrible act against democracy if the voice of Joe Quaid was to be heard no more through the medium of your column.”

From Gertie Hanrahan of Market Street, Listowel, comes the following: “I enjoy Joe Quaid’s yarns. They are clean and wholesome, not like some of the muck we are forced to read in English Sunday papers. Long live Joe Quaid and his likes. They are a credit to Ireland.”

I know Joe is the last man to expect praise but it is only fair to him that the will of the people be made clear. Joe Quaid is deservedly one of the most popular storytellers in the rural Irish scene and in spite of all threats his tales will continue to appear.

The late, great John B Keane was a Leader columnist for more than 30 years. This column first appeared in our edition of July 22 1972

WALKING along Beale Strand one day last week I came across a number of dead fish. They were quite fresh and seemed to have only just died. There were two good sized tope sharks one weighing about ten pounds and the other about fifteen. I counted four assorted flatfish and about 20 or so small crabs. I wonder if others have encountered dead fish along the coast.

This inexplicable appearance of so many stranded fish is a recent thing and deserves looking into at once.

Another phenomenon is that for some time now the bird population of Gurtenard Wood in Listowel has all but disappeared, that is with the exception of rooks and the large flocks of seagulls which feed from the nearby quarry and the river.

Some people blame the smell which has newly arrived in town; so far no one has come up with any positive proof. Whatever it is the birds have all but disappeared and on most days be the weather dull or fine, wet or dry, there is no birdsong to be heard in the many green glades which once sheltered thousands of our native songbirds.

Cause for alarm? I should imagine so.