The art of cooling one's soup has been blown away 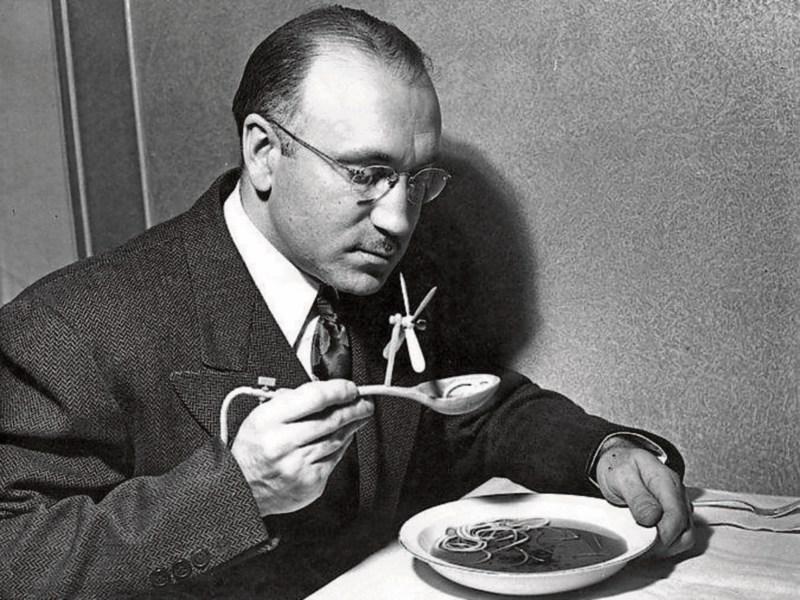 It is rather strange that no book or, indeed, no thesis has been written on the soup-cooling caper. Most students are aware of the two methods I have mentioned but if we are to bring the discussion to its proper conclusion we must examine all the nuances, as it were, of this dying art.

For some time I have been secretly but assiduously gathering information. I have statements from men and women in all walks of life and I must admit that the conclusions I have drawn are somewhat disturbing. The women I have interviewed were very reluctant to talk at all and one turned her back on me with a nasty look on an otherwise nice kisser.

I did, however, manage to extract a statement from a fairly honest woman. She assured me that she liked all kinds of soup except tomato soup, but she confessed also that she did not like the idea of a discussion on soup-cooling. I was mystified. I begged her to tell me why. After a while and after the most persistent persuasion she did.

Apparently all women are mortally in dread of being associated with soup, and when any sort of soup discussion comes up they close their mouths so that the observer is led to believe that they have very small mouths indeed.

It is not the soup so much that they fear, but there is a tag, and if this awful tag is attached to a woman, no matter how charming or how beautiful she may be, it will never be lived down.

Without more ado, I will tell you what it is. It is a simple statement and it can mean so many things, each and every one of them derogatory. Here it is and don’t say you haven’t heard it.

It is: “God bless her. She has a great mouth for cooling soup.”

Well, dear student, there we have one of the chief reasons for the decay in the art of soup cooling. This simple, disparaging sentence has not only killed mature discussion but is also responsible for the non-appearance of many fine tomes, tracts and theses on a subject dear to the hearts of all men, be they drunk or sober.

It is important that the student bear in mind when he sets out to discover more about his subject, i.e., the art of cooling soup. But to go on.

There are many otherwise sensible and God-fearing men who draw the line at blowing into their soup in order to cool it.

We must look deep into the background of human behaviour if we are to comprehend why, if we are to expose their prejudices and allow them to live full lives like other men.

Perhaps a case example might be as good a way as any to make my point. During the course of my investigations I met a man who told me that he refused to blow into his soup no matter how hot it was.

“Let it scald the puss out of me,” he said unashamedly, “I will not cool it it for love or money.”

Statements of this nature always make me curious and being a student of human nature as well as a student of soup cooling, I invited him to have a bottle of stout that we might better discuss his attitude.

It appears that the poor fellow had an unhappy childhood and was made to work for a mean farmer during his early teens. The food was poor and there was never enough of it.

On Sundays and holy days of obligation soup was on the menu. It was weak soup and he told me that on its surface there were few if any suleens. In those days, soup without suleens was not regarded as true soup. Anyway, as I say, there were never more than one or two suleens in the soup.

On the credit side the soup was hot and the young fellow was forced to blow it if he was to finish his dinner in the ten minutes allowed him by the farmer. Always when he blew and however gently he blew the suleens, which were tiny, were blown away so that whatever remained was little better than hot water.

He was faced with what was for him the major decision of his life up that that point. He made up his mind at once and never again cooled his soup.

Afterwards when he went upward and outward into the world he never lost the habit and not until I met him did he divulge his secret to anyone.

Here we kill another prejudice and again we see why there has been so little honest dialogue on this worthy subject.

Other men and women have stopped cooling their soup for other reasons. One woman told me that she used always cool her soup until one day in the dining car of a fast-moving train she blew into it just as the carriage lurched over an uneven piece of rail.

Sitting opposite was a cleric who happened to be a Monsignor. The contents of her plate were at once deposited on his lap. She was mortified. The Monsignor muttered something in Latin under his breath and spent the remainder of the journey trying to remove the soup from his trousers.

Thereafter this unfortunate woman refused to cool her soup even in the presence of young curates and ordinary laymen. She often burned her lip but she was adamant about not cooling the soup.

I think, perhaps, that I have made my point through the few foregone observations. I hope I have been of some assistance to the student and I hope I have killed a few prejudices into the bargain.

The late, great John B Keane was a Leader columnist for more than 30 years. John B was on holiday for three weeks in June 1972. His “Out in the Open” series resumed after his break. In the interim, the Limerick Leader reprinted three of his essays which were first published in the paper a few years previously, beginning with this one on June 3 1972.