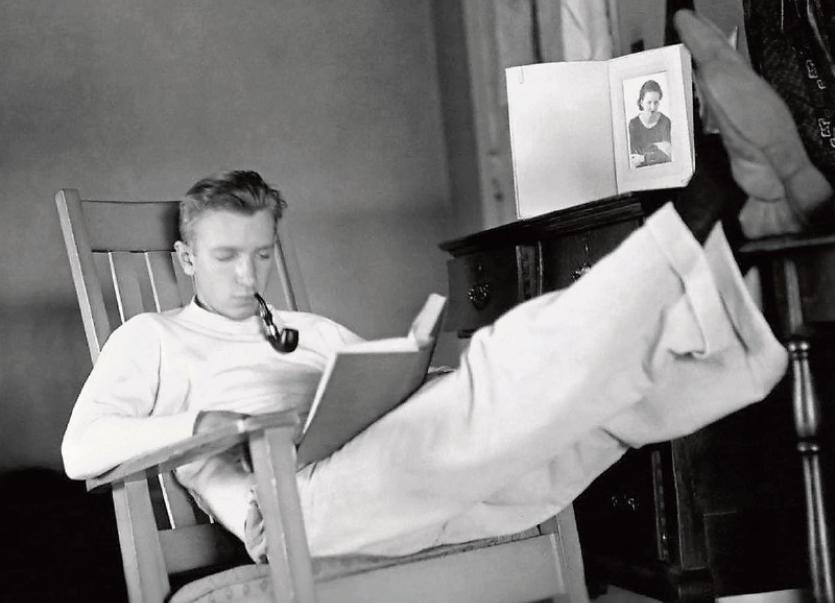 ABOUT TEN years ago I wrote an article in this very paper on pipes and on the magnificent art of pipe-smoking. It was a light-hearted and nonsensical piece which demanded little intellectual concentration. Alas in the intervening years we have seen the advent of a new type of pipe smoker.

In short, he is a man who goes into a shop, buys a pipe and tobacco, and without consultation of any kind with a practised pipe smoker, lights up and puffs away as if he knew the tricky business by heart.

This is a dreadful state of affairs and one which should have been brought to the notice of the public long before this.

I have seen this new breed of unqualified amateurs standing at the entrances to hotel bars, reception rooms and public meetings endeavouring to give the impression that they are very clever chaps indeed.

It is true of this new breed of pipe smoker that the more he seems to know the bigger the amadán he is likely to be.

If he screws up his face and looks his wisest it does not mean that he is trying to solve a mighty problem. It merely means that he is using a defence mechanism to convince people that his is not really a donkey.

I bring this revelation about modern pipe smokers to public attention in order that innocent people might not be intimidated by these gigantic asses who use the pipe to cover genuine deficiencies, backwardness and mulishness.

Your genuine pipe smoker is a man of wit and discernment and in the long run will prove that he is a fellow above the ordinary.

The trouble with the other fellow is that it often takes a long time to find him out.

When he is found out it is often too late and he may have duped and misled hundreds in the interim.

As I say, these unmitigated scoundrels are degrading an innocent pipe to whitewash their own inadequacies.

BROTHER Stephen Russell is no stranger to these columns. Brother Steve is currently stationed at the Alexian Brothers’ Nursing Home in Manchester.

As many readers will know, Brother Steve was a member of the Defence Forces during the Emergency and he was a clown with Duffy’s Circus for a time after.

He joined the Alexian Brothers after than and is one of the best-loved figures in that distinguished Order. The Alexians devoted their lives to the care of the incurably ill.

This week Br Steve writes to say that I err when I maintain that the last of the Castlemahon wild asses was seen around the turn of the century.

He himself saw one long after. So did a Mr Denis O’Connor, who now lives in Streatham, London.

“I saw him,” writes Denis O’Connor, who is a native of Templeglantine, “when I was coming home from a wren dance in Kilconlea.

“At the time I thought he was just an ordinary ass but since I read your column I now realise I was wrong. He was smaller than usual and when he brayed it was like a pony stallion.

“He chased me for two miles of the road. Neighbours said the following day that I was drunk but they were silent when I showed them his footprints on the snow the day after.”

Mr O’Connor has some unusual theories about wild asses.

“There’s a few of them still left in Dáil Éireann,” he writes “but you won’t catch any of them braying.”

Brother Steven writes as follows: “The enclosed poem might be of use to you. I was in Mick Cussen’s pub in Feohanagh on the night I saw the Castlemahon ass.

Con Murphy, the famous footballer, and Mick Sheehy of Kilmeedy were with me and I told them about my trip home for the weekend and a short cut I would take through Castlemahon. It was then that they warned me about the Castlemahon ass.” Here is the poem:

My dear J.B. believe me,

I saw him long ago

On a lovely moonlit summer’s night

when the land was all aglow

I was cycling home to Thomastown

on a weekend army pass

When I did spy with fearful eye

It was in the year of forty-three

I was in the army then

in atonement for my sins.

I had left behind me Bunoke Bridge

And I nearly died for by my side

He was the most fearsome creature

that I had ever seen;

His teeth gleamed white in the pale moonlight

His mane was long as a huntsman’s thong,

And ‘twas then I knew that the tale was true

The poet goes on to describe his encounter with the ass and his narrow escape from the dreadful creature. Unfortunately space is limited so I will only reproduce the last verse:

When I came around, oh joy profound!

I was in Mike Cussen’s pub,

With a wheel of folk around me

and I there in the hub.

I told them of my vision

and they spluttered all aghast

“You had no dream for you’ve plainly seen

THERE IS no week that I don’t receive a letter in connection with matchmaking. Some of these letters come from lonely bachelors of middle age, more come from bachelors in their thirties, and a few come from women of fairly advanced ages. None come from men or women in their twenties.

Unfortunately, I am not a matchmaker, and cannot help the applicants. All I can do is refer to the Knock Marriage Bureau or the only reputable matchmaker I know, the experienced Patrick T. Ahern of Glensharrold, Carrigkerry.

I am taken to task, not for the first time, by a lady from Ballaugh who accuses me of trying to wreck people’s lives by suggesting matchmaking.

“Don’t you know the number of fiascos that came about all over the people that marry people they don’t know! What right have you to encourage our young boys to make matches with girls they know nothing about, a lot of them straps that could not darn a sock or make a bed?

“I see enough tragedies as it is. Don’t you dare have the gall to start more.”

Ah, my poor woman from Ballaugh, whether we like it or not, every marriage, no matter how happy, must end in tragedy anyway. You see, marriage is a truly great drama, with all the necessary moods and conflicts throughout, and like all great tragedy, the awful curtain comes when one of the principals must bow out forever to leave the other awestruck, heartbroken and alone.

The late, great John B Keane was a Leader columnist for more than 30 years. This column first appeared in our edition of May 20, 1972

LETTERS still arrive about the difficulty in finding men to cut turf in the bogs of North Kerry and West Limerick.

A well-known Abbeyfeale publican has this to say:

“The days of cheap labour are finished forever. Now that we are in the Common Market you will see an end to turf cutting.

“I am changing to oil this very day as I cannot find a slean of workers. Most of my customers have the same complaint to make. It’s a case of cut it yourself or be without it.”

He is only echoing the sentiments of thousands of one-time turf users.

This does not mean that bogs are worthless. I read lately where the world’s oil supplies will last no longer than 35 years if the switchover to oil continues at its present speed.

Therefore my advice to bog owners: do not sell your holding cheaply. Your children and grandchildren will be very glad to have it yet.