Castlemahon wild ass was small in size but evil in temper 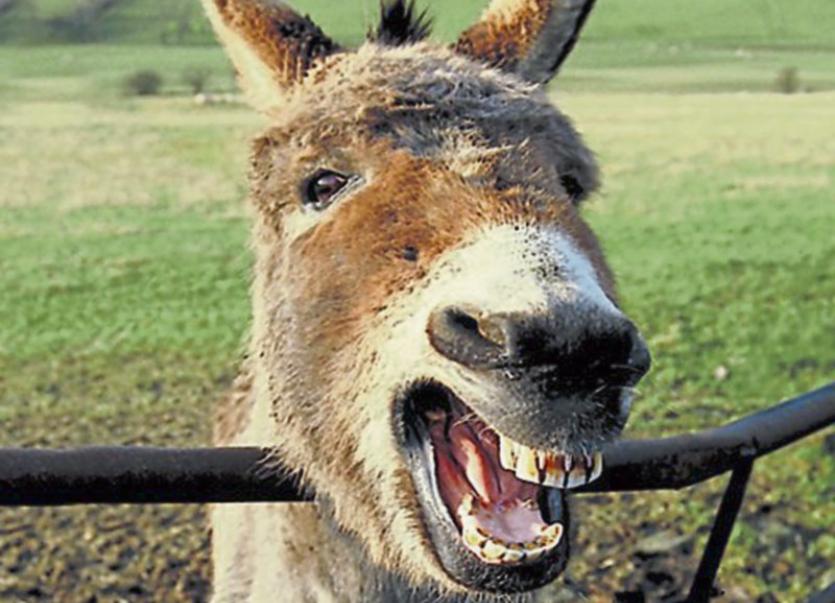 THE Castlemahon wild ass! I’m ashamed to say that I had never heard of this little-known animal until recently.

He roamed the heights of Turraree and the purple heath of Clounleharde so beloved by the poets until very nearly the turn of the century. It was in Glin recently while relaxing from the rigours of the road that I heard about this extraordinary creature.

In size, the Castlemahon wild ass was infinitely smaller than its domesticated fellows but what it lacked in size it made up in sheer viciousness and evil temper.

At its maximum this now extinct herd numbered over a hundred and stragglers were quite common in places like Barragone and Carrigkerry.

In the second great famine of the seventies the natives turned on the wild asses to supplement their meagre rations and very soon they no longer wheeled and thundered over the West Limerick uplands.

The squealing of the mares and the stentorian braying of the jacks or stallions no longer carried on the wild breeze.

No longer did the wild masses of untamed asses rise the dust on the summer bohareens or the greater roads of the coastline.

The last Castlemahon wild ass, according to my Glin informant, was seen on the slopes of Knockathea in the year nineteen hundred and six.

He was spotted by a turf cutter and that is the last recorded instance of a sighting. Readers will remember that less significant events received more publicity at the time.

There was the disastrous earthquake of San Francisco and there was the revival of the women’s suffrage movement in Britain.

Not a word about the asses although far biger asses in military uniforms were receiving the lion’s share of publicity.

So much for the Castlemahon wild ass. No one seems to know how he came into being. Was he only a tame ass who reverted to the wilderness called to birthright by the ancient mists that crown the hills above the Shannon or was he, as some believe, a refugee from the hinterlands of Asia Minor who was brought by boat to the green shores of Erin?

We shall never know.

LET ME make a right ass out of myself and continue about asses. I should perhaps have mentioned earlier that the highest price offered, although not accepted, for a racing ass was two hundred and ten pounds.

This amount was offered to Paddy Behan of Bunagara, which is beautifully situated on the Listowel road to Athea.

The name of the ass was Listowel Factory and the money was offered after he had won the Listowel Donkey Derby for the third time. This was in the year 1964.

This was widely believed to be the greatest donkey derby of all time. There were asses from Tipperary. Kerry, Limerick, Cork, Wexford and Newry.

After a disastrous start and after being interfered with on the historic Church course the great Bunagara donkey pulled out at the line to win by a nose. The crowd went wild and the jockey, young Gerald McCarthy from Finuge was shouldered high by grateful punters who had back the Factory from three to one down to evens.

It was indeed a great occasion. It is doubtful, however, if it was the greatest donkey race of all time.

ONE MUST go back a hundred years from that momentous night in 1964 to 1864 and another donkey derby, which must surely rank as the greatest of all time.

An account of this race is to be found in the Tralee Chronicle and Killarney Echo in the October 11 edition of 1864. The writer is Alethes. I cannot alas quote the full account but I will do the best I can.

“Thursday last week, the sixth of October, in the year of grace 1864, was a glorious red letter day in the lives of the little unkempt Arabs and Bohemian ragamuffins of Listowel.

“The Listowel Donkey Races got up by some individuals belonging to the Charles Kingsley School, having a little muscular exercise and display of physique were to come off with all due pomp and eclat. The races were previously announced with stentorian vehemence of voice and melodious tinkle of bell by “Bird Eye” the redoubtable town crier. “Long before the hour of starting which was four o’clock, a crowd of unwashed urchins and youthful tatterdemalions from all parts of the town and country come trooping into the Square the general trysting place and rendezvous.

“Pound Lane and Glounafooks, Tea Lane and Church Street, Greenville, Grogeen and Clieveragh all sent their contingents to swell the muster of the young folk at these miniature Olympic Games.

Nor were the wiseacres and greybeard of the community absent.

There were some old pensioners present grim-visaged, veteran warriors of India and the Crimea, medalled and ribboned taking as much delight in the sport as if they were escalating the bastion of the Malakoff or charging with the point of the bayonet at a regiment of Hindu or Mussulman idolaters.

“Never were the thews and sinews, the hopes and expectations of the rising generation in such prime condition.

“Never before were there seen so many donkeys of all shapes and sizes lean and lank, sleek and plump together congregated in the square of Listowel. In a word every sorry animal that could be borrowed from nomad tinker or other strolling vagabond of that ilk, or procured by any species of juvenile cajolery whatever was brought into requisition.

“No less than twenty-eight donkeys were entered for the race. It were a sheer impossibility for me to hand down to posterity the names of all the juvenile Centaurs who signalised themselves on this great occasion.

“There were Billy Saunders and Jacky Kennelly and Jimmy Doolan and Neddy Flanagan and Mickey Hegarty and Tommy Purcell and Patsy O’Sullivan and Charlies Gallivan and a whole host of others besides. Many of the riders were dressed in red and blue jackets and bedizened with other cheap finery, their gaudy ribbons floating in the breeze contrasting strangely with their looped and windowed raggedness.”

I THINK digesting the foregoing will take some time so I will break off till next week when the final instalment of the 1864 Listowel Donkey Derby will appear.

As I recall the lowest price paid for an ass in recent times was a double Woodbine. The late Dickeen Roche of Listowel was the purchaser.

I was told the story by Dickeeen many years ago when you could buy a big rack chop for five pence and people would be ashamed to charge you for a single turnip.

That is all behind us now as the goat said to the kid when she cured herself of constipation.

It transpired that Dickeen was charged with the drawing out of his father’s turf from Sand’s Bog when he was a gorsoon of thirteen. At the time Dickeen’s own ass was lame so an ass had to be borrowed.

Dickeen went to the house of a friend, a man by the name of Sideface Sullivan. He received his nickname became of his habit of presenting only one side of his face in conversation.

The other side had a machail and the poor man was ashamed of it.

Anyway, he gladly gave the ass. Dickeen drew out his turf and so the winter’s firing was assured.

As time passed the lame ass got no better so that any time Dickeen wanted the loan of an ass he went to Sideface.

Quite understandably Sideface grew tired of loaning the donkey and one day in a fit of irritation he told Dickeen that he would sell him the ass altogether.

“How much do you want for him?” Dickeen asked.

Dickeen went home and told his father, who gladly bought a double Woodbine and if there is an instance of an ass going cheaper I would like to hear about it.

The late, great John B Keane was a Leader columnist for more than 30 years. This column first appeared in our edition of March 11, 1974