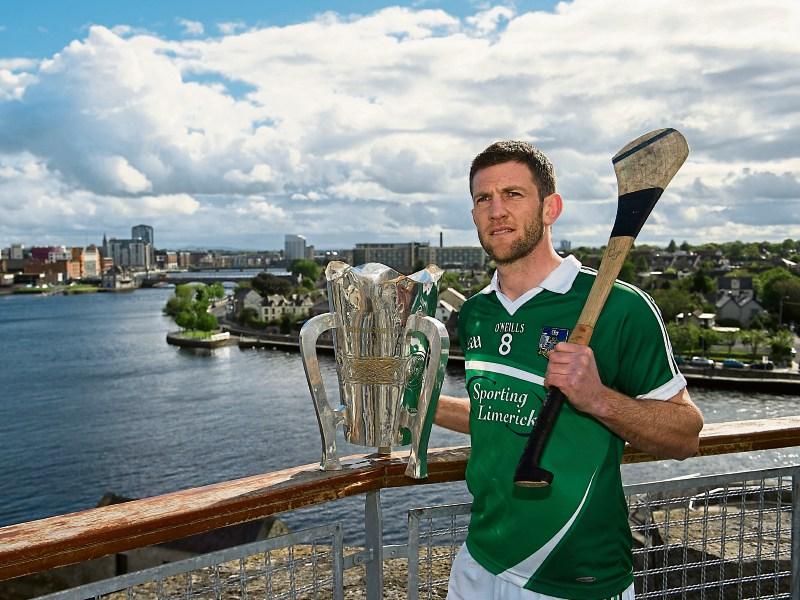 IT’S an image that Donal O’Grady will never forget.

Thousands of green and white clad supporters filling the playing surface of the Gaelic Grounds as he lifted the Munster SHC Cup on July 14, 2013.

“It brought home just how much it means to everyone in Limerick. There is no doubt that it is the highlight for me,” reflected O’Grady this week as he looked back on his Limerick hurling career after announcing his retirement.

“2013 is still so vivid… what a memory to see that joy on that day in the Gaelic Grounds was unbelievable. Hurling is everything to Limerick people.”

It was O’Grady’s first year as Limerick captain - noteworthy as it was the first time the captain was selected by team management.

What a captain he proved to be - an ideal role model for Limerick hurling as the coveted trophy made its way across the city and county.

“As captain there is a responsibility,” outlined the 35 -year-old.

“It was manic but very enjoyable - it had been 17 years since the cup was in Limerick and the whole place was on a high. Every phonecall was someone trying to book the cup for their club or event.”

“2007 and those three games with Tipperary were great. The build up to the All Ireland final showed just how much hurling means to Limerick. In Croke Park I think Limerick outnumbered Kilkenny 20-1."

Great days but also dark days in the green and white.

”Tipperary in 2009 would have been a real bad one, and not being available for selection in 2010 was very disappointing as well. Those two, and if I was to say three, I’d have to include Clare in the 2013 All-Ireland semi-final. We had won Munster and were looking for that extra kick to get to an All-Ireland final. I don’t have too many regrets but I wish I could change that day against Tipp in ’09. Honest to God, it wasn’t the fact that Tipp beat us but they humiliated us and the worst feeling I’ve ever felt was leaving Heuston Station in Dublin. We had to walk past a full platform of supporters to get into the carriage and that would have been the lowest of the low. When we won the Munster title in 2013, it was thank God we actually did it for the supporters. It was the least they deserved after a topsy turvy few years.

Back in 2001 O’Grady won an All Ireland U-21 medal as a substitute. He was to be one of 29 players to graduate from those three Dave Keane winning sides to play senior championship. He outlasted all on the inter-county scene and just the west Limerick man and Niall Moran from that era won 2013 Munster SHC medals.

“I often said that I wasn’t the most gifted hurler in those teams,” he remarked.

“Growing up all I ever wanted to do was play hurling for Limerick so I never took any of it for granted,” he said of his career, describing himself as a “late developer”.

He was 23 when he made his senior debut.

“It’s 12 years ago but I can still remember running around the track in UL with my mouth open alongside the likes of Ciaran Carey and Steve McDonogh. Padjoe Whelehan brought in about 100 players for trial matches and I was lucky enough to make the extended panel of 44/45 and it went from there,” he recalled.

That was 2004 and for the previous four years he had been involved with the county intermediate side. Between then and now, O’Grady was an almost ever present. Just twice he missed out on championship games – Wexford in 2014 and Kilkenny in 2005. The Granagh-Ballingarry man was to serve under seven different managers and has seen a “massive” difference in terms of preparations.

“In 2005, '06, ‘07 and those years I was on the team but not one of the real leaders. We had the likes of Brian Geary and Ollie Moran and I didn’t really have much responsibility. I think I was at my best from 2010 onwards – the more pressure on me, I more I seem to have got from myself,” he recalled.

He also benefited from a more professional county set-up.

“From a physical point of view we were probably playing a bit of catch-up. Dave Mahedy was with a few teams and did great work but when Jerry Wallace and Donal O’Grady came in it went to a whole new level with scientific approach. I know lads who are top hurlers and just didn’t enjoy the training. Some nights I just wasn’t able but most nights I relished it. Especially when captain, you can’t be seen to show a lack of desire.”

By his own admission, there were good and bad days.

“Limerick hurling is always news be it a Munster league game in January or championship. It’s not a burden but it is something that you have to contend with. Everyone has a connection with the team and wants to know the latest news. The championship will come around and there is nothing like the crowd that support Limerick.”

Big pressure, but he will miss it.

“It’s so enjoyable to be a group of lads all with the same aim. There is a massive unity in the Limerick pan and a great bond that I will miss. To be part of a set-up that means so much to so many people.”

It’s a responsibility that rests easy with O’Grady.

“I would walk out to the pitch and kids run to you – I would have been one of them one time so you have to give them time. They see you on telly and can’t believe that they can see you the following day.”

O’Grady now joins the band of Limerick supporters but isn’t so sure about the transition.

“I was on the bench when injured last year against Wexford and I found it hard. When you are inside the white lines you are in control,” he explains.

But what he is looking forward to is more time for Granagh-Ballingarry and his family.

Married (to Kathryn Kennedy) and with three children, Donal runs the family Spar in Ballingarry.

“My family have always been so helpful to me when it came to hurling. My parents Ruth and Donie went to every game and always made sure the shop was ok for me to head off training or a match.”

”It was always special to represent Granagh-Ballingarry and to see the club under my name in a match programme.

“In the last few years I probably haven’t trained that much with the club because the time just wasn’t there so I hope to do that now.”