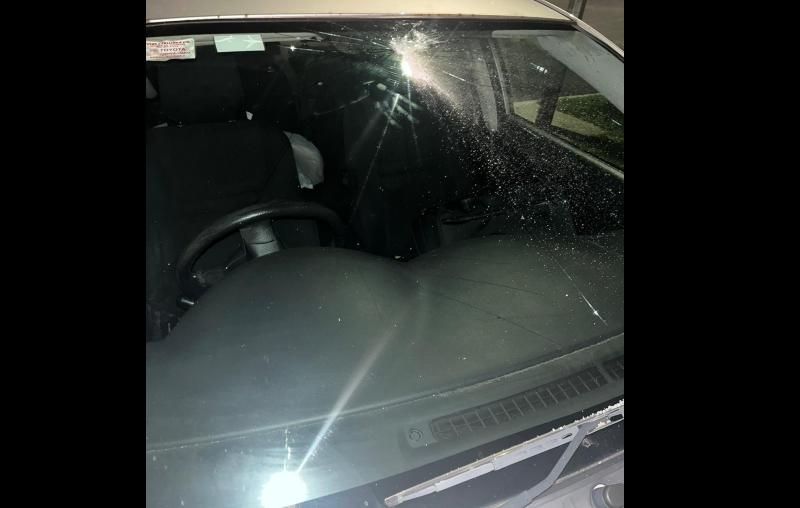 A picture of the damage caused to one vehicle

LOCAL residents are up in arms after gardaí failed to respond to an incident where teenagers were seen throwing rocks from a busy Limerick railway bridge onto oncoming traffic.

The alleged incident, which took place on Thursday evening, September 17, led to one motorist receiving a cracked windscreen and the “fright of their life.”

Cllr Sarah Kiely told Limerick Live that one elderly gentleman, who was passing below the bridge, located overhead the Ballysimon Road, Limerick city, was shook after his car was struck.

“Irish Rail need to come in and look at this seriously with the council. If there is loss of life or serious injury where does the buck stop,” she said.

The bridge, denoted UBE2, is one of nine railway bridges operated by Iarnród Éireann in Limerick. Cllr Kiely believes the teenagers are accessing the bridge from a point in the nearby estate, Woodlawn Park.

Limerick council entered into a caretaker agreement with Irish Rail for the maintenance of the bridge in the 1980s, Cllr Kiely added.

Speaking on Live95, one gentleman, aged 73, said he got the “fright of his life” when his windscreen was hit, and fearing that someone might lose control of their car, visited Roxboro Garda Station.

Shaken, he told how he explained the situation to gardaí along with five other concerned motorists, who had witnessed the incident taking place last Thursday.

“They said that they reported the incident to Irish Rail and that’s all that they could do,” he said.

Following a query from Limerick Live on Friday morning, a garda spokesperson said: “There are no reports of an incident on our system that matches your description at this time.”

Cllr Kiely informed that on Friday morning, residents of Woodlawn Park visited the access point with a Limerick council engineer, in an attempt to block access to the railway bridge being used.

Despite their best efforts, Live95 broadcaster Joe Nash, who first brought the issue to listeners attention on Friday morning, had his car struck that evening, he said on air this Monday morning.

“I have asked gardaí to put out extra patrols. It’s not good enough for them to say that it is the council or Irish Rail’s problem. It is a public order offence and needs to be sorted,” Cllr Kiely said.

Irish Rail did not respond to a query submitted by Limerick Live.