Drinks on the house in Limerick pub courtesy of Russell Crowe 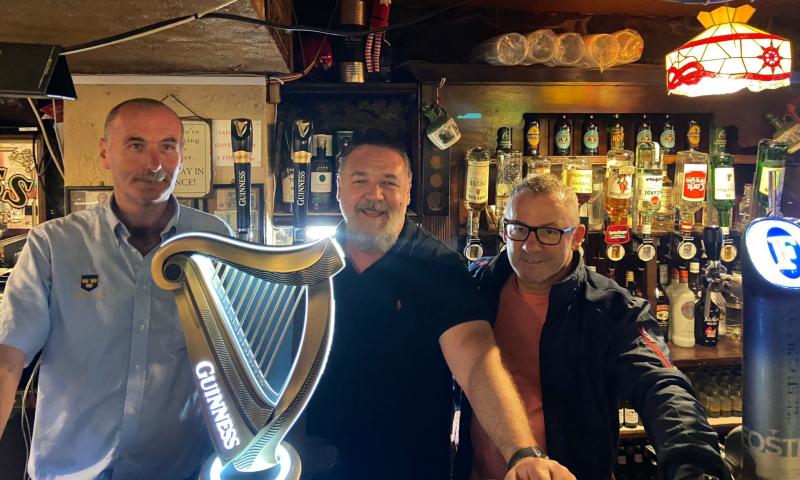 A pint Russell please when you're ready: The Oscar winner with Pat O’Connor and Tom Dore, bar manager, in Charlie St George's

RUSSELL Crowe said on the Late Late Show on Friday night that he was looking forward to a trip to Charlie St George’s in the city and he is a man of his word.

Plus, he said he got a much nicer pint in Limerick than he received in RTÉ on Friday night!

At 9.20pm on Wednesday night the Oscar winner dropped into the pub on Parnell Street. He was accompanied by over 40 cast and crew from the film The Pope’s Exorcist. Scenes in the upcoming movie are being shot at Dromore Castle in Pallaskenry.

Tom Dore, manager, said it wasn’t his normal Wednesday night behind the bar.

"Russell Crowe and three others just walked in and then a short time later the entourage came along. He bought a couple of rounds. He was extremely generous. It was his tab," said Tom, who invited Russell behind the bar but the Hollywood great preferred to let the experts pull the pints.

"He was happy to stand by the tap for a photo. He was drinking Guinness. He said it was a lovely pint. He said that the one he got on the Late Late Show wasn’t a great pint. He was extremely quiet and very nice. One of the regulars got his autograph and he was over the moon," said Tom.

It wasn’t the first time the New-Zealand born actor has frequented the watering hole. He struck up a deep friendship with one of Limerick’s most famous sons Richard Harris on the set of Gladiator.

Following Richard Harris’ death in 2002, Russell fulfilled a promise to his great friend to watch a rugby match in Ireland and visit some of the his favourite pubs. Former Limerick Leader editor Eugene Phelan got an interview with Russell back in 2002 - click here to read.

The owner of Charlie St George’s and the Parnell Plaza, Murrough O’Byrne was also there that famous night 20 years ago.

"When Richard Harris sadly passed away to the great movie screen in the sky, Russell Crowe made a special effort to pay his respects to his friend and their great friendship by revisiting Charlie St George’s pub, Limerick city and Kilkee. It was a remarkable display of friendship and solidarity,” said Murrough.

Russell is almost a regular at this stage!

"He’s just a grand fella, a very down to earth chap. He seems to like Limerick. He did have a nice night - he wasn’t intruded upon. He was very generous - he bought a couple of rounds and was generous to the staff too,” said Murrough.

Russell knew exactly where he wanted to sit and he will always be welcomed back in Charlie St George’s.

His last words to the bar manager as he left were, "I’ll see you again, Tom".