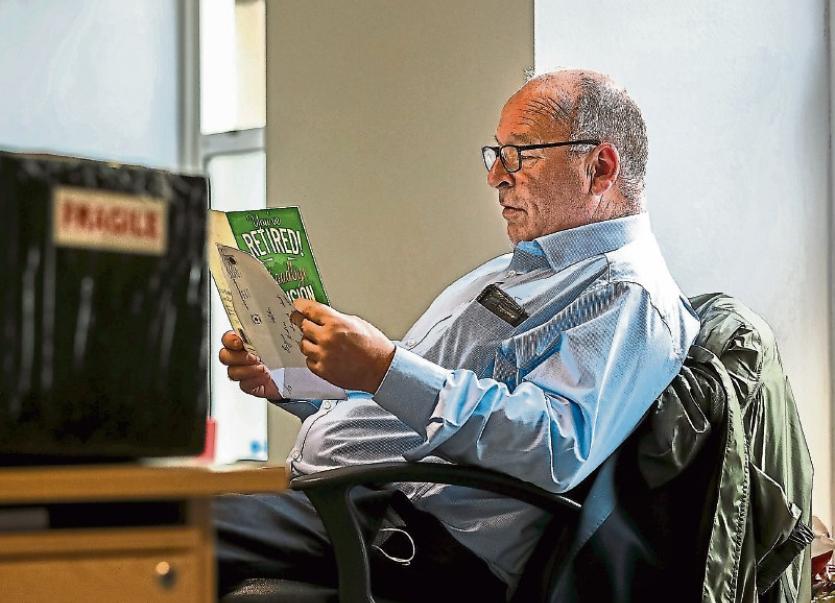 Eugene Phelan at his desk on his final day before retirement PICTURE: Keith Wiseman

Little did he realise that it would be there he would remain for the next 45 years until one rainy summer’s afternoon when he would toast his career with a pint of plain on the Leader doorstep before embarking on a new chapter of his life in a world plagued by a global pandemic.

In those intervening four and a half decades he would meet world leaders including US president Gerald Ford, European royalty including Princess Caroline of Monaco, golfing superstars including Tiger Woods, TV villains like JR Ewing, and one Oscar winner by the name of Russell Crowe.

Dressed in a shirt and tie, jacket and slacks the young cub reporter Phelan walked into a smoky newsroom dotted with Royal and Remington typewriters which were humming to the tune of some of the best reporters in the land.

“I hadn’t a clue, not a clue,” recalled Eugene of his first day on the job. “Brendan Halligan was the editor and was very good to me. Bernard Carey was the news editor and you had the likes of Cormac Liddy, Charlie Mulqueen, and Jimmy Woulfe. There was smoke all over the room.”

It was normal enough in those days for reporters to come back to the office from a job “tipsy”.

On his first day, Eugene was sent to cover a press conference at Durty Nelly’s in Bunratty for Joseph and the Amazing Technicolour Dreamcoat.

“I went with Dick Naughten from Thomondgate. My father, an army man and staunch pioneer, was thrilled when I got the job, but gave me a severe warning about drink. I asked Dick what I had to do and he said just collect the press release and eat and drink as much as you can. On my first day home after my father warned me about drinking, I came home drunk!

“I remember going to press conferences and nearly everybody would have a gin and tonic, or two. It would be 11am or 12noon. You’d go onto the next event and have lunch and a bit of wine. Sometimes you could end up going to three or four jobs. Between the Leader and the Chronicle we had papers out six days out of seven - the only day we didn’t come out was Sunday. And our circulation at one stage was up to 35,000 copies.”

Eugene studied shorthand and typing at the famous Mrs Mac's secretarial college at The Crescent.

He won two major national awards in journalism - National Journalist of the Year and another business award for a series he did on businesses in Limerick.

“I was only in journalism for a very short time. I remember I went on television and I was terrified. There was only RTE and I was on a programme called Print Out, I think it was.”

The most exciting story he ever worked on came in his first year on the job in October 1975, when Dutch businessman Tiede Herrema was kidnapped by the Provisional IRA in Castletroy. This triggered a large police investigation and a two-week siege, after which Herrema was released unharmed. Eugene slept out in a car in Monasterevin in County Kildare during the steakout.

He was there when Herrema eventually came to the window of the house he was being held in and was seen for the first time since his capture when he spoke briefly to the media and gardai.

“It was fascinating,” Eugene recalled.

On the celebrity side of things there were plenty of interviews and hand shakes but the showbiz story that stands out for Eugene was his encounter with Princess Caroline of Monaco.

It was 1979 or ‘80 and the princess was staying in Kilfrush House near Knocklong which also played host to President Richard Nixon, who Eugene followed there on another occasion but did not meet.

Princess Caroline was, at that stage, in her first marriage to Parisian financier Philippe Junot. Their lavish wedding ceremony was attended by guests including Ava Gardner, Frank Sinatra and Cary Grant. The couple, who had no children together, divorced in 1980, and the Vatican later annulled the marriage.

Eugene headed out to Knocklong with photographer Dermot Lynch, a regular companion on stories. Journalists from the national media had earlier been turned away but Eugene and Dermot tried their luck and drove into the grounds of the magnificent house, and could not believe their luck when they saw Princess Caroline out riding on her own.

“I approached her, with the normal, ‘welcome to Limerick’ jargon, expecting to be sent running, as she was at that time going through a very public spat with her husband. But no, she stopped spoke and was charming and gave us a lovely interview, quotes and photos.

“In journalism at that time you always sold on stories and I would have made a fortune if I asked her the question, ‘Are you going to divorce your husband?’ If she said ‘yes’, ‘no’ or whatever, it was a big story. I just thought that she was so lovely that I couldn’t ask.”

Russell Crowe came to Limerick in 2002 a month after the death of Richard Harris and Eugene got a call that he was in Charlie St George’s having a pint.

“I met Harris a few times and he could be quite intimidating. He didn’t suffer fools gladly, or just didn’t want to be interrupted by a young whipper snapper journalist,” Eugene recalled.

“There was a queue in the pub to get autographs and when I told Crowe I was a local journalist, looking for a quick quote from him, and I would leave him alone, he told me to go and sit at the bar and he would be with me. He left me stew for quite some time and then he beckoned me down some time later and ordered me to buy him a drink and one for his friends. I could see straight away this was not going to be easy, but in fairness to him after I bought the drink and he and his friends had a bit of a laugh at my Limerick accent he wrote a tribute to Harris, which he gave me on a serviette.

“He took time and handed it to me. It read: “I love Mr. Harris. I miss him deeply. I respect him because of his work, I loved him because of his generosity and I am richer in my soul for knowing him. I came to Ireland to fulfill a promise. That is what men do for other men, dead or alive.”

The visit by Pope John Paul II to Limerick on October 1,1979 was the biggest event ever to happen in Limerick.

“I don’t know how scientific crowd estimates were back then but they were saying 400,000 turned up,” recalled Eugene who was one of those in attendance in the press pack.

“I think we went down there at midnight the night before - the full Leader team. People came from all over. There was a pope-mobile. It was at the old racecourse at Greenpark on South Circular Road. Cormac Liddy was a great character in the Leader, he’s a former sports editor. The Limerick Leader were invited onto the pope’s flight into Ireland and Cormac was on it and he shook the Pope’s hand. And just to show what a remarkable journalist he was, he wrote about 2,000 words on the handshake,” Eugene laughed.

“There were no mobile phones, internet or such devices which have now made the job so much easier.

“The closest thing to technology was Tipp-Ex so the local paper was king.”

Eugene’s curiosity was piqued one evening when he was passing through Newcastle West and saw a big queue of cars, tractors and other vehicles outside a local shop. While he didn’t get a scoop he was chuffed to find out the reason for the tailback.

“They were waiting for the Limerick Leader, the van was late, I was told,” he smiled.

And as he held aloft his pint of Guinness at the Leader doorway last Wednesday afternoon, the legendary Leader man was, at last, completely free of the pressure of securing a scoop - of the news variety -  or meeting another tight deadline.