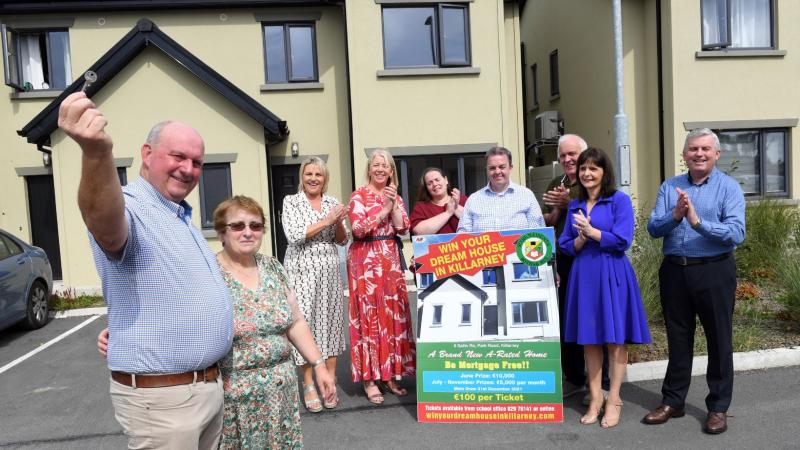 A LIMERICK man has collected the keys to his new house in Killarney that he won in a fundraising raffle for back in January.

Michael Ambrose from Ardagh says he is ecstatic to finally get the keys to his “dream” house.

“We’re feeling very happy about the whole thing. We’ve been down to the house quite a bit, we’re working on getting bits and pieces such as beds and other furniture at the minute,” Michael said.

When asked if he was happy with the location of his new Killarney home Michael exclaimed: “Oh God I am!”

The grand raffle, in aid of Boherbue National School, took place on January 3, 2022 and was broadcast live on Facebook with ten prizes given away on the night.

The top prize of a four bedroom house in Killarney, worth €355,000, was won by to Michael and his wife Geraldine.

The co-educational school was built in 1934 and was extended in 1970 with 195 pupils currently enrolled.

Thanks to all for supporting our school fundraiser throughout 2021.

The results of our final draw are below.

The fundraiser was to raise funds for a general-purpose room, extend the playground and upgrade the field to include a health promoting walkway, sensory garden and skills wall.The second prize from the January raffle of €1,000 went to another Limerick man - Colm McMahon from Ballyagran.

“I entered the draw after hearing an interview on Radio Kerry when I was driving one day and Marie Casey, the school principal was being interviewed and I thought they were very brave people to make a raffle for a house so I entered it on the website because it was quite an easy name to remember,” Michael said.

However, Michael isn’t going to be moving into the house.

“Actually it’ll be my son James who’ll be moving in with himself and his partner because he works near Killarney so he’ll get great use,” Michael added.