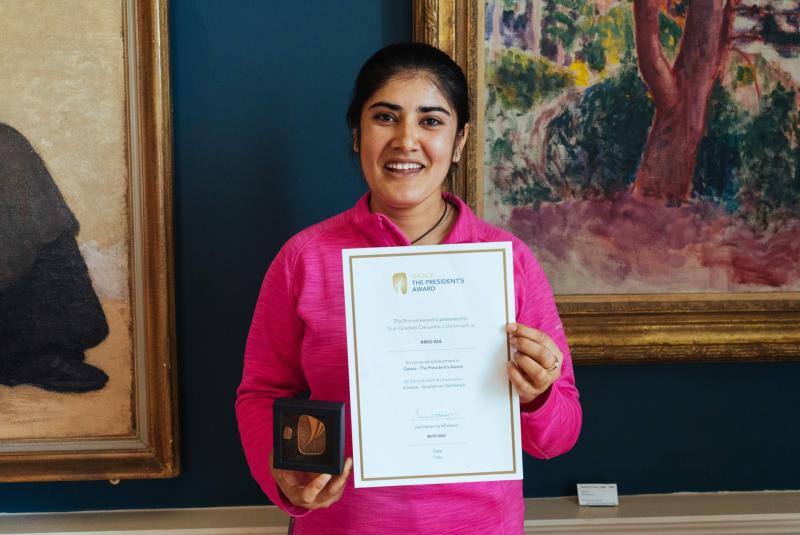 Areej with her Gaisce medal and certificate

EIGHT special young people were celebrated in Limerick upon receiving The President’s Award.

The ceremony held in the Hunt Museum in Limerick, celebrated the awardees, who each received a medal and certificate for their fantastic achievements.

Cllr. Olivia O’Sullivan, Cathaoirleach of the Metropolitan District of Limerick, opened the ceremony by welcoming them to Limerick.

“It cannot have been easy for many of you but you have shown true grit and determination. Attributes that will no doubt stand to you as you continue on your path to adulthood,” she said.

Awardees got involved with Gaisce through their Wavelength programme, which supports young people who are seeking asylum or have refugee status in Ireland with the opportunity to participate in Gaisce.

In order to complete their Gaisce Award, each recipient set and achieved their own goals across challenge areas that include personal skill, physical activity, community involvement, and a team adventure journey.

Participation in Gaisce aims to encourage the personal development of young people by building confidence, and connections and getting involved in their local community.

Gaisce’s CEO, Yvonne McKenna, congratulated the awardees by highlighting the journey they’ve made to complete their award.

“It takes time, work and commitment to complete your award and you did it, all while balancing everything else you’re doing in life. You each have your own inspiring Gaisce story now and I encourage you all to tell it,” she said.