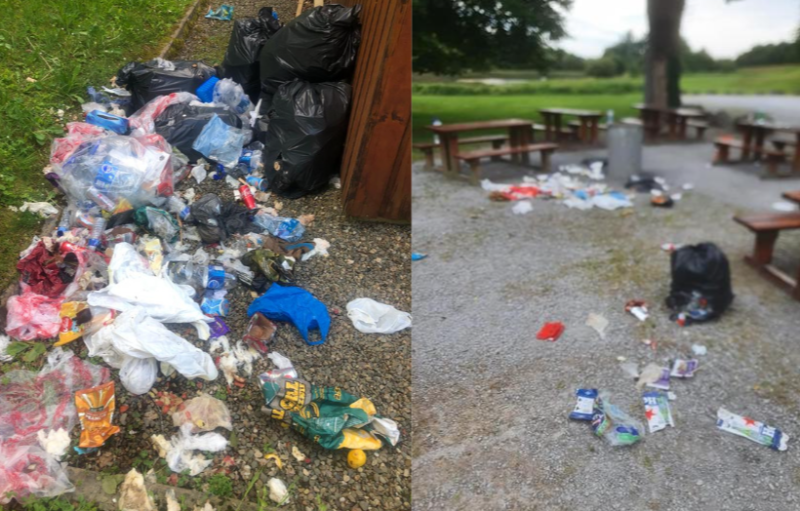 AN INCREASE in dumping at one of the jewels in County Limerick’s recreational crown is down to “some people being filthy” - declared Minister for State Patrick O’Donovan.

These selection of photographs show the picnic area at Curraghchase Forest Park being turned into a glorified landfill site. And Mr O’Donovan was not mincing his words with regard to those responsible.

“Sooner or later we have to get the message in this country that the filth and the dirt that is being dropped along the side of the road, or in beauty spots like Curraghchase, doesn’t come from a space ship, it comes from the people amongst us. I have no problem saying that some people are just filthy.

“It is beyond belief that people feel the necessity to leave their rubbish on somebody else’s property. Do they think it is some sort of a fairy or a phantom that comes along it and removes it all? Unfortunately, people have to clean up after them,” said the minister of state with responsibility for Office of Public Works.

The former home of the de Vere family in Kilcornan is under the auspices of Coillte who hadn’t replied to a media query at the time of going to press.

“There was a litter bin where somebody had managed to carry out a feat of engineering because they had balanced the rubbish high up into the sky. Then the next person coming along was balancing it on top of the previous person’s rubbish.

“At no stage did anybody say to themselves, the litter bin is full I’ll actually take home my rubbish. Presumably they have a mode of transport to get home so why can’t they just take it home with them? It can’t be tolerated,” said Mr O’Donovan, who specifically mentions those enjoying a barbecue in the great outdoors and then don’t clean up after grilling.

He has questioned the value of litter bins on OPW sites because “I think litter bins actually generate litter”.

“Do people think that this litter bin is full, sure I will leave it down beside it and what harm is that doing. But then a crow comes along and pulls it all over the place. A small bit of common sense here would not go astray,” said Mr O’Donovan.

Coillte is of a similar mindset as they do not provide bins in their forest or recreation sites.

“We expect all visitors to bring their rubbish home in line with the Leave No Trace message. So please keep our forests clean and take your rubbish home and dispose of it properly,” reads the Coillte website.

Mr O’Donovan asks those who decided to leave their rubbish in Curraghchase “would they like their own house treated like a landfill site?”

“Look at the tonnes of rubbish collected by volunteers on County Limerick roads on Good Friday during TLC. The dumping is done by people who live amongst us and it is not good enough,” said Mr O’Donovan, who asks anybody with photographic evidence, mobile phone footage, licence plates in relation to littering to report it to the council.