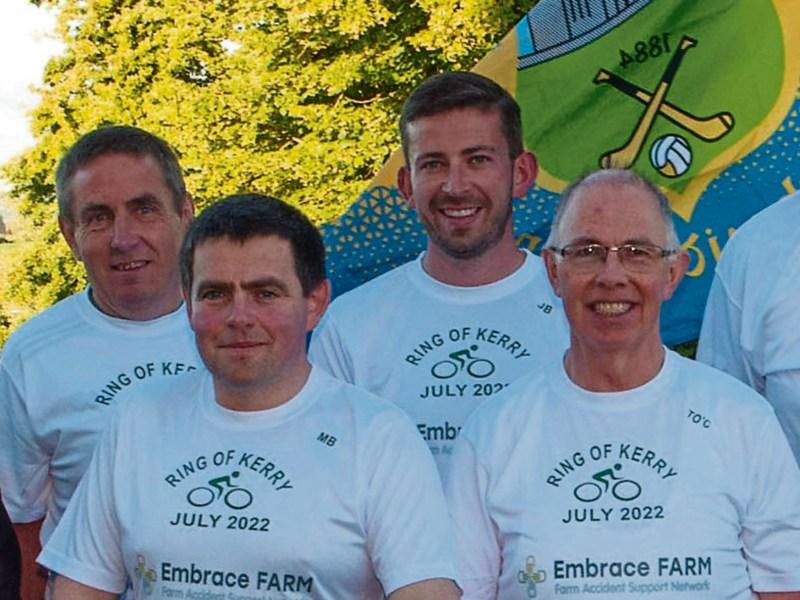 Fr Tomás O’Connell, right, will lead the cyclists on the Ring of Kerry

INSTEAD of putting his feet up on his 60th birthday a Limerick-based priest will be working his legs like never before!

Parish priest of Pallasgreen / Templebraden Fr Tomás O’Connell and a group of supporters will cycle the Ring of Kerry today and tomorrow.

Fr O’Connell, who has fitted into the locality in the last 11 months like a lycra bike jersey, has roped in some cycling disciplines to join him.

Maurice is also one of Mike O’Donoghue’s group who sleep out and fast for 24 hours for the Irish Cancer Society.

And this challenge is also for charity – Embrace FARM who support families experiencing loss as a result of farm accidents, sudden traumas and suicide. The cyclists are paying their own expenses and have been supported by the local community.

Eilish Phelan will travel with the cyclists as a team support over the two days. Personalised T-shirts were kindly sponsored by O’Dwyer Oil Products, Old Pallas.

“Sincere thanks to those who have helped out in any way thus far,” said Fr O’Connell. A GoFundMe page has been set up called Fr Tomás & friends Ring of Kerry cycle 2022.

At a gathering of the cyclists, their families and helpers at the parochial house, Caroline Redmond from Embrace FARM expressed gratitude to the team for choosing the charity. Many of the cyclists are from farming backgrounds and are well aware of the importance of farm safety, and the significance of Embrace FARM to families unfortunate enough to experience accidental death or serious injury on the farm.

One of the cyclists Noel Buckley is a survivor of a farm accident having fallen off a ladder whilst working on a shed, thankfully suffering only a broken leg.

Noel is delighted with the opportunity to support Embrace FARM and is appealing to farm families to support the charity.

A Remembrance Service will take place at the grotto at Nicker church this Saturday, July 23 at 8pm during which the names of those in Limerick and Tipperary who died in farm accidents will be remembered.

An Irish night will take place in The Idler Bar, on Friday, July 29 at 9pm.