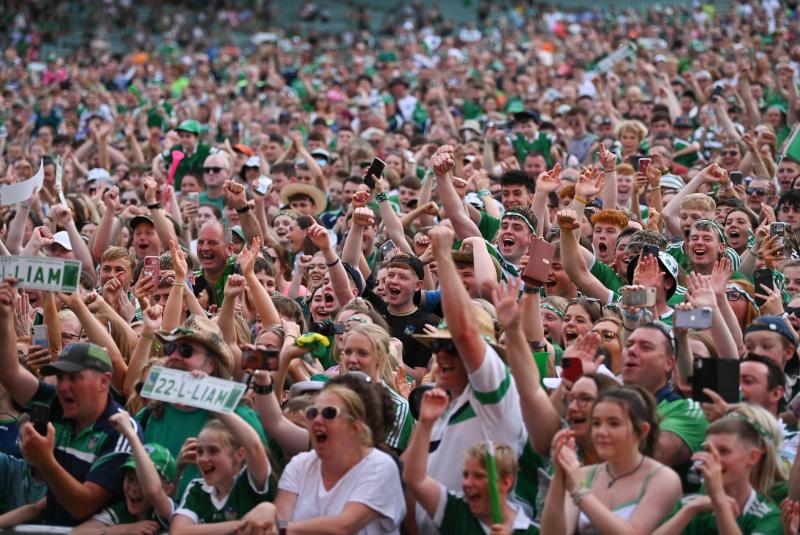 There were joyous scenes at TUS Gaelic Grounds on Monday night for the homecoming celebrations | PICTURE: Sportsfile

DRINK it in. Taste it. Swirl it around your mouth like a fine red wine. Savour it. Limerick are the All-Ireland hurling champions for the third year in-a-row and the fourth in five.

The county is not just dining at the top table - it is feasting, gorging itself on glory. The hurling holy trinity of Kilkenny, Tipperary and Cork have now felt the almighty power of this Limerick team on multiple occasions since 2018.

What a group of players. What a manager. What a backroom team. And what fans.

Players and supporters were exhausted after referee Colm Lyons pursed his lips. The short blast of his whistle was music to our ears. Only the beat of Dreams kicking in and Dolores O’Riordan’s unmistakable voice could get those on the pitch and the stand bouncing again.

The party had started.

As Declan Hannon said in his speech after lifting the Liam MacCarthy Cup with Cian Lynch, “We have two or three years of celebrating to catch up on!”.

Limerick fans were asked not to congregate at Colbert Station on Monday afternoon for the players arrival. But like with the giant flag on King’s Castle in Kilmallock - when did we ever obey the rules? The green army came to pay homage.

In pictures: 30 of the best photos from Limerick's homecoming celebrations

Ireland had provisionally recorded its hottest day for 135 years with a reading of 33.1 degrees reported at the Phoenix Park.

Limerick had officially recorded the hottest day in the history of mankind with the mercury not even reading on thermometers.

Just as the Road Safety Authority issued advice over the dangers of “sun glare which can leave road users temporarily dazzled or blinded by the sun” Declan Hannon emerged from a VIP train carriage showcasing shades and silverware.

We are all dazzled by the success. The tarmac at the train station was bubbling like the atmosphere. Players on the open top bus even cooled some gasping fans down with a splash of water. They have quenched our thirst in more ways than one.

As the bus slowly made its way through thronged streets there was a touching moment when the team saluted the great Pat Hartigan. For 45 years Pat and his fellow 1973 All-Ireland winners wanted to be consigned to history, and in the nicest possible way this team has done it. They are making their own.

Limerick Boat Club gave a guard of honour as they crossed Sarsfield Bridge.

The bells of St Mary’s Cathedral rung out. Their final destination of the TUS Gaelic Grounds loomed - where the foundations for this success was laid on cold, dark nights with barely a sinner watching them.

Well over 22,000 had gathered to welcome them on stage. When the Liam MacCarthy Cup was presented to the Limerick hurling supporters by John Kiely and Declan Hannon the place erupted.

Declan now succeeds Christy Ring as the captain who has lifted Liam most often.

Chaila went down a treat with the MuRli-produced beat.

Move over D4, Glenageary, Blackrock, Greystones, Bray and Kinsale, the 061 is officially Ireland’s most expensive postcode to buy a property, because it comes with ‘Liam’.

Dolores was everywhere - in the skies, over the speakers, in our hearts and in our minds.

“Oh, my life is changing everyday in every possible way.

The Cranberries connection to this team and fans runs deep.

Claudio Abbado called Carlos Kleiber the most important conductor of the 20th century. But he didn’t know about Carlos Kiely. He does now!

With mobile phone in right hand - the lens facing out onto the crowd - the Galbally man used his left hand to set the metrical rhythm for the 22,000-strong orchestra.

“We love our traditional music but we love our hurling as well,” Anthony Daly famously roared from the Hogan Stand in ‘95.

Well, in Limerick we love our rock and rap but we love our hurling too! Declan belted out Caledonia and John Kiely serenaded the crowd with Piano Man.

There was a touching moment when county board chair John Cregan led a round of applause for superfan Jordan Fitzgerald of Kilfinane, who tragically died en route to the All-Ireland semi-final.

Jordan would have been at Croke Park and the TUS Gaelic Grounds and loving every second.

Meanwhile, the party continued in town. Forget the Trip to Tipp, Glastonbury and Coachella, 'Limrock' was where everyone wanted to be.

Whomever named The Still House was obviously being sarcastic as an impromptu concert started up outside at close to midnight.

The temperature was still 19 degrees as they wiggled their hips in denim cut-offs, flexed their biceps in just their bare skin.

Ticketmaster wouldn't have been able to cope with the demand for this impromptu festival on Thomas Street. And, best of all..no booking fee!

What makes it all the sweeter is the pain of the past. Three in-a-row. Don’t pinch us for fear it’s a dream. Yes, they do come true.