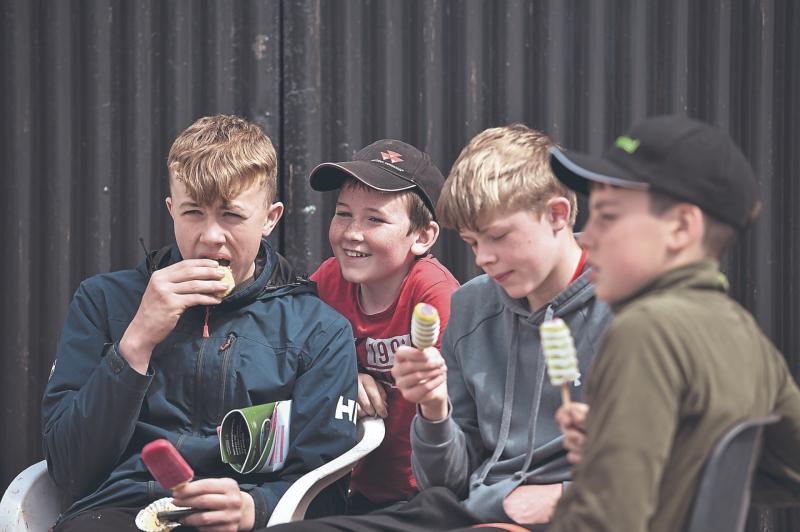 Start ‘em young! Among the large crowd at the farm open day in Doon were lots of youngsters enjoying their school holidays and learning about the work being carried out in the Mulkear EIP Project

A LARGE crowd of over 150 attended a farm open day organised by Mulkear EIP which exemplifies agri-environmental best practice.

It was held on the land of prominent and innovative dairy farmer Martin Crowe in Doon.

Mulkear European Innovation Partnership (EIP) project is working with 65 farmers in Limerick and Tipperary, who are leading the way on implementing on-farm mitigation measures to improve water quality.

This five year (2019-2023) EIP project is co-funded by the EU and the Department of Agriculture and is led by farmers and the Mulkear Team, Carol Quish, project officer and Gearoid Maher, field officer.

“I would also like to thank our advisory panel for their input, advice and support. To the Department of Agriculture Executives specially Eileen Delaney. And to our host farmer Martin Crowe who has always been a leader in innovative thinking and action,” said Mr Dillon.

Minister of State Niall Collins said the narrative that farmers are anything other than environmentalists is totally dispelled in Doon.

“Of course, the excellent Crowe farm is one part of the really exciting Mulkear River EIP. The EIPs have proven themselves to be hugely successful. Taking a community, ground-up, approach to results-based actions, EIPs are excellent for the environment and are important support for the farm families involved,” said Mr Collins.

The Fianna Fail minister said all the farmers involved in the EIP are leaders and influencers.

“You have been environmental pioneers for years and have played a key role on so many levels. You have done invaluable work in addressing some biodiversity declines and you have been so huge and important in setting the record straight among the general public that farmers don’t care for the environment.

“You also display, every day, that food production and protecting the environment do not have to be mutually exclusive. I commend you all for the committed and crucial work you all do in this space,” said Mr Collins.

Ms Quish said they were celebrating and showcasing on Martin Crowe’s farm the work that the 65 Mulkear EIP participant farmers have undertaken. She went on to say that modern agriculture practices are blamed for a lot of environmental problems, but in those same conversations, farmers are also expected to be the solution.

Sales of fans, ice-cream and garden furniture skyrocket in Limerick as temperatures soar

On the farm walk Mr Maher, assisted by Mr Crowe, discussed the importance of the use of multi-species sward and the resulting reduction of chemical fertiliser inputs to produce top quality swards.

Mr Crowe also discussed his success at incorporating clover into the grazing platform.