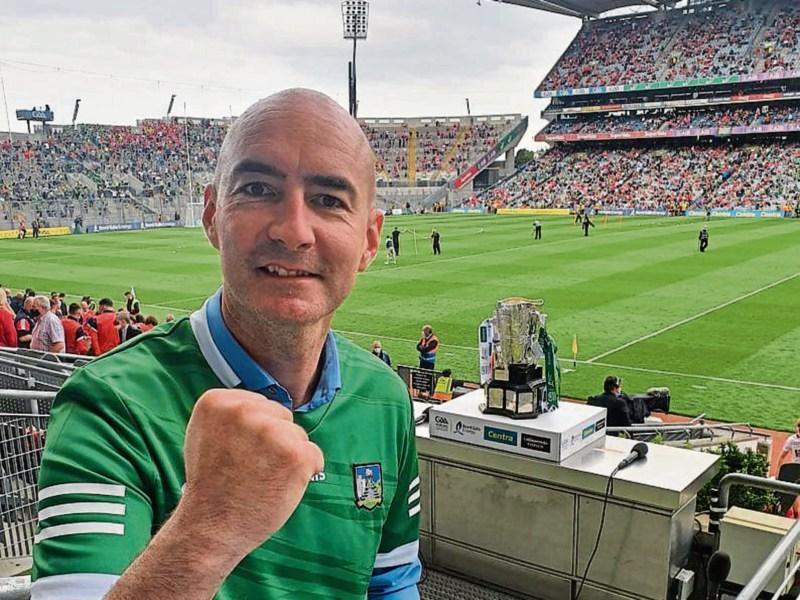 OVER THE course of his year in office, the outgoing mayor Daniel Butler can point to many highlights.

Watching Limerick win a third All-Ireland title in four years at Croke Park, affording the Freedom of Limerick to his “hero”, the cervical check cancer campaigner Vicky Phelan, and giving a reception to Denise Chaila, making history in the process, would be just three.

But arguably, the moment which touched councillor Butler the most took place much closer to home.

Taking up the story, he said: “I planted a tree for Tree Week in my children's school in Mungret. When I came into the yard, they had their creole greet me with music. They bought my son Jacob’s class out to greet me. My daughter Layla was there. When I came in, I just got a grunt off her as she’s 12 and she doesn't really want to talk to me! I gave them my superpower - homework off for the whole school.”

The nicest moment was afterwards when his son, who is just six years old, came home.

“He just wouldn't stop hugging me. I was wondering what was wrong with him! But he said ‘Dad, my heart is full of love’. It was his way of expressing how proud he is of me. For him to be able to say that as I was there as mayor, if I didn't do anything else after that, I'd achieved as much as I could,” he said.

But Mayor Butler did do a lot more over his 12 months as first citizen. It’s been a busy period for the Fine Gael councillor, who will hand over his chain of office on Thursday.

Indeed, his office at City Hall is a reflection of the many connections he has made.

The top floor facility has been completely redesigned and now contains local art, paintings, drawings and ceramics and other memorabilia.

“I’ve always said the mayor's office is like the front room of Limerick. I'd welcome dignitaries from all over the world here. We have an amazing view, but sometimes the weather isn't with us. So to be able to have these, I’m able to tell the story of Limerick in different ways while promoting local artists. We've an amazing creative and cultural element to our city so to be able to promote that and make it central to the office was great, and hopefully the next mayor will carry it on,” he said.

Mayor Butler was elected - unopposed - as Limerick finally began to escape the shackles of the Covid-19 lockdown.

But in the early days, he still had to contend with the restrictions. 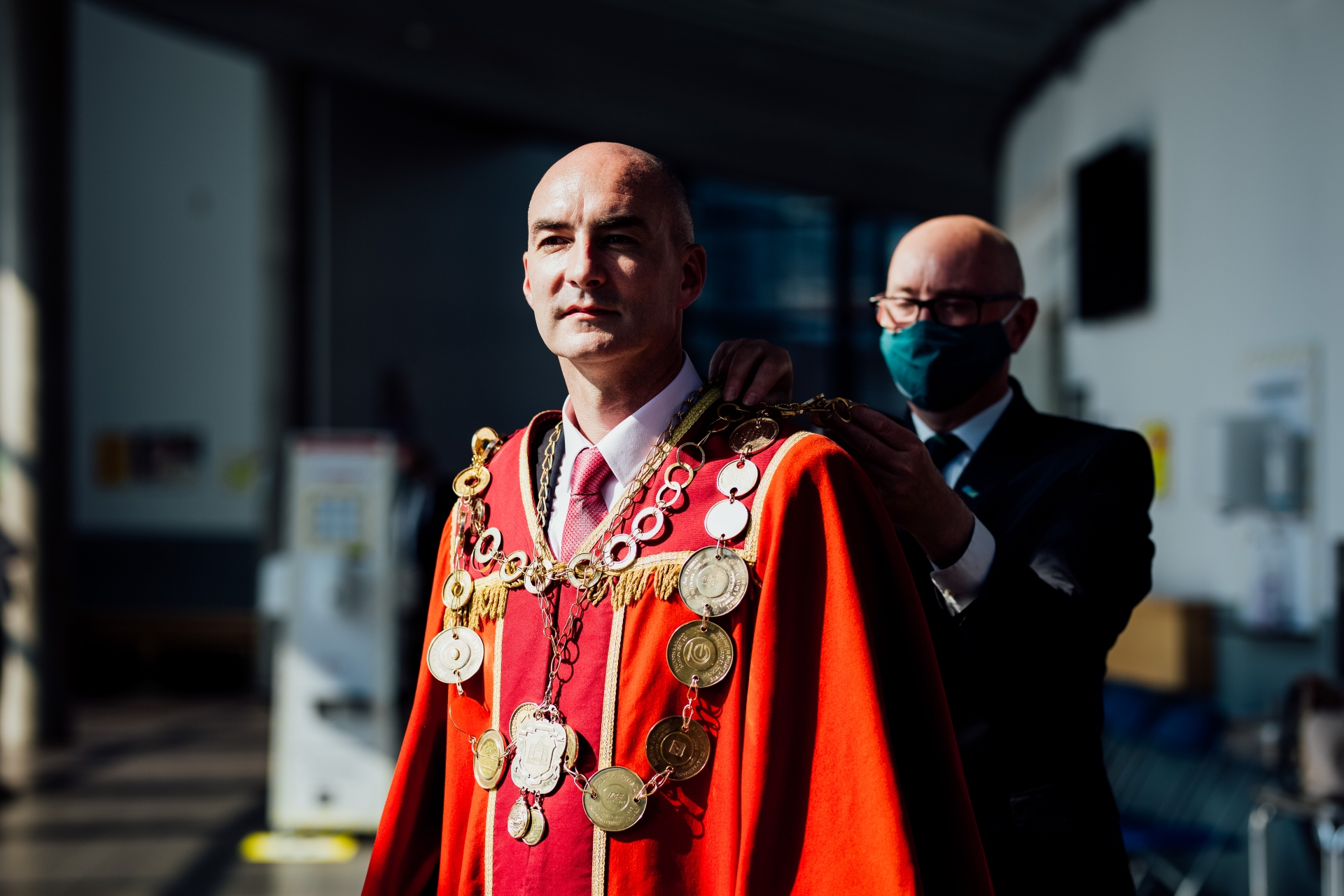 One of the impacts of this was the fact when he witnessed the hurlers retain the Liam MacCarthy cup, Croke Park was only half full.

Of course, it did not dampen the day, with visits to GAA headquarters always tinged with a bit of emotion, as it was there he went with his late father Richard, a popular councillor up to his untimely death in 2013.

With Limerick once again in the final four of the All-Ireland hurling championship, Mayor Butler predicts the Treatymen's work ethic will get them across the line.

Switching codes, it was also a terrific year for the footballers, who got promoted a division, and reached the Munster decider after a thrilling semi-final win over Clare on spot kicks.

For the first citizen, it’s something which feeds into a wider narrative about Limerick's sporting success.

He said: “Limerick has an incredible sporting history and culture, but it just doesn't surprise you any more. The hurlers have set a bar in terms of excellence and we should achieving at the higher levels, and we should be expecting no less of ourselves. Throughout the year, between our Olympians, our Paralympians, the hockey team who were national cup champions, between Pike Rovers recently winning the under-age. We are breaking records here, smashed. We need to realise how fortunate we are, and I really hope people continue to savour these moments and understand how amazing we are doing.”

A modernising mayor, Cllr Butler was the first to ensure that a Freedom of Limerick ceremony was available to view to the wider world, that of Ms Phelan in February.

“For the very first time, the citizens of Limerick were a part of it. We recorded a video [with their thoughts on Ms Phelan]. It was the first time we did that. It was a very unique event, and the citizens should have full access to Freedom ceremonies,” he said.

It was a particularly emotional night.

“It's not often you get to meet one of your heroes, so getting to meet your hero, and be in the position I was to be able to honour them was special. She didn't let me down either. They say never meet your heroes. Don't believe that for a second. She lived up to everything I expected of her. She had a very special presence, a very special energy, and a generous person.”

Over the course of the year, it is the "ordinary citizens" of Limerick who have stood out the most to the mayor.

Nowhere was that more apparent than the way Limerick responded to the Russian invasion of Ukraine.

“I remember being at Cleeve's at midnight looking at a warehouse full to the brim with donations. Two full articulated lorries being picked out of there late at night. I'd like to pay a particular tribute to Anna Mazeika, whose community were very special. To see those two truckloads pictured in Ukraine coming directly and see the continued support shows Limerick should be very proud of what they've done,” Mayor Butler said.

Another small bit of history was made, and another personal moment took place, across in London, when Cllr Butler held the first mayoral reception outside of Limerick.

It was to honour the president of the Limerick Association in London, Conn Dee, originally of Murroe.

“When I was there, one of the older members gave me a lovely gift of this hand-crafted little stool. The fella didn't have much, came to London with nothing, and gave me something small. Understanding the story of that generation who, when they left Limerick, they might as well have been in Australia,” he smiled.

As he ends his term, Mayor Butler won't be drawn on whether he wants to make a run for Limerick's new executive mayor - something he keeps being linked with.

“Right now, I am going to spend some time with my family, some time with my friends and just rest. My most important thing to do right now is get back to representing City West, and give them all my energy. After that, who knows,” he concludes.