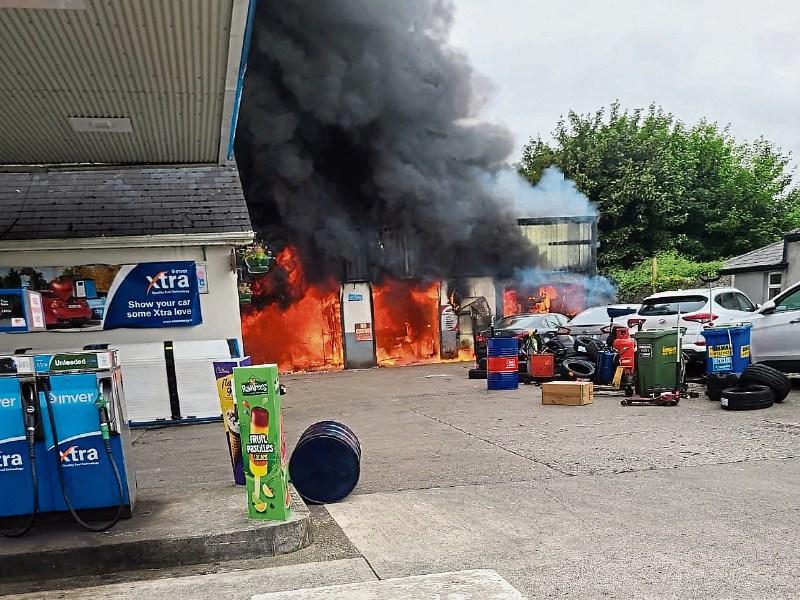 THE FOUR business owners affected by the all consuming fire in Ballyneety have worked for over 70 years between them at that location.

John O’Mahony Tyres, John Collins’ Wheelfix and Rory Browne’s Garage were all under the one roof which they saw go up in flames last week.

The four men wish to thank people for the outpouring of support and goodwill since it happened.

“I’ve got loads of phone calls and loads of messages. People have been very good,” said Mr O’Mahony.

Mr Collins said it has been “unbelievable”.

“I had over 200 text message, between that and phone calls, people offering new sheds. You wouldn’t believe the wonderful friends you have when it comes to something like this,” said Mr Collins.

Declan Gannon, of DG Autos, has his cars parked on the lot and continues to trade. He lost one car that was parked beside the building.

Mr Gannon said he has been offered the use of yards if he wanted to park his cars there but thankfully he can continue to trade.

“People have been very good – saying if I need a hand with anything,” said Mr Gannon.

The four men stress the most important thing of all is that nobody was seriously injured or worse.

“Human life is more precious than tool boxes and all that kind of stuff. We can all rebuild,” said Mr Browne. This is echoed by Mr O’Mahony and Mr Collins as they all try and find replacement premises as soon as possible. Mr Collins, who specialises in alloys, said he is also prioritising getting customers sorted out who had their wheels destroyed.

Mr O’Mahony, Mr Collins and Mr Browne all tried to put the fire out with extinguishers but it they hadn’t a chance after the explosion and all the flammable material caught fire. Mr Gannon was in Sixmilebridge at the time.

Mr O’Mahony said it was “unbelievable”. “I never saw anything to up so quick,” he said. Mr Collins said: “It just took off. There was nothing you could do.”

Mr Browne thinks that if a fire truck had been parked beside the building “they wouldn’t have been able to control it because it was that aggressive”.

The business owners also thanked Limerick Fire and Rescue Service for their fast response and co-ordinated efforts to get it under control and stop it from spreading.