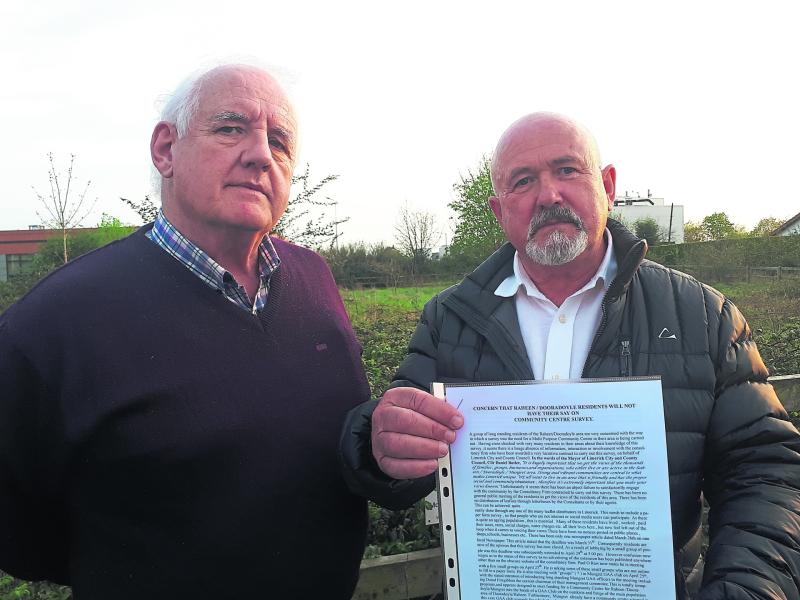 A CALL has been made on the council to extend the consultation period it has in place for a new community centre in Raheen/Dooradoyle.

After many years campaigning, the local authority has announced a feasibility study for the project for a community facility serving the city’s southern suburbs.

But a group of long-standing residents have said they are very concerned about the way in which the survey is being carried out – and they want the period of gathering responses extended until the end of May.

At present, the consultation closes at the end of this week.

There has been the option to fill in a form online, however, but John McInerney of Nessan Court said that a paper form must also be made available so people who are not internet or social media users can take part.

“As there is quite an ageing population, this is essential. Many of these residents have lived, worked, paid their taxes, rates, social charges and water charges all their lives here, but now feel left out of loop when it comes to voicing their views,” he said.

“It is patently obvious that this deadline needs to be extended a further six to eight weeks in order to facilitate a properly conducted survey. Many people have waited a lifetime to realise their dream of a community centre for their area and are baffled by the rush to cobble together an incomplete and inaccurate result which is having the effect of excluding them.”

They are being supported by councillor Fergus Kilcoyne, who said: “Their input should be highly considered. Not enough has been done on this. It’s a very built up area, and it’s been lacking in facilities for years.”

In response to a query, a spokesperson for Limerick City and County Council insisted the local authority has been "very open and transparent" throughout the process.

"Details of the survey were released on Limerick.ie on March 14, 2022 with an original deadline of March 31, 2022. This deadline has been extended to April 19, 2022. The press release subsequently led to it been carried on local papers (Limerick Leader, Limerick Post) and local radio (Live95)," he said adding that 440 responses to the public survey and 22 responses to the group survey have been received.

We encourage all those who wish to make submissions by getting in contact with the Council ahead of the closing date.