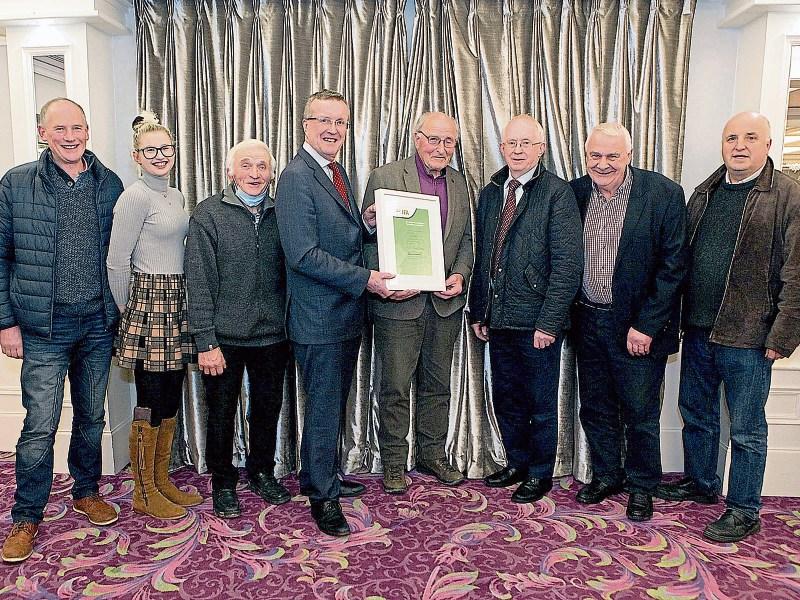 Sean Hanley is presented with his award (main picture) and below , Josie Ahern is honoured | PICTURES: Dave Gaynor

THE IFA would be nothing without women like Josie Ahern, Croagh and men like Sean Hanley, Anglesborough.

Sean Lavery, Limerick IFA chair, said the award is presented for “outstanding, loyal and long service to the organisation”.

Josie was once described on a radio show as “a formidable woman” and they weren’t wrong. She always stood up for what she believed in and is as kind as the day is long.

Mr Lavery said Josie has never been found wanting in supporting and representing her local farmers over the years.

“We can all remember Josie organising tea and sandwiches for the beef factory protest in 2014 on a 24/7 basis,” said Mr Lavery. This reporter doubts if there was ever an IFA protest that Josie didn’t support.

Away from Limerick IFA, her fundraising for numerous charities is legendary. Josie raised thousands of pounds and euros for a school for dyslexic children in Limerick and she is one of the true Friends of St Ita’s in Newcastle West.

In recognition of her selfless work over the years, Munster IFA awarded the 2012 Paddy Fitzgerald Memorial Award to Josie. It is only given every two years. Josie was an excellent farmer and won many fatstock prizes at Rathkeale Mart over the years.

Josie and her late husband Ned raised four daughters and one son.

On the other side of the county, Sean Hanley was the founding secretary of the Anglesborough branch of IFA 60 years ago in 1962. A man ahead of his time, he installed the first bulk-milk tank and was also the first to build a slatted unit in Anglesborough.

Mr Lavery said Sean held many officer positions in his local branch and said his “campaigning for farmers has been outstanding over the years”.

“He was very much involved in supporting several farmers who had gotten into financial difficulties and was able to organise support at county level to find a solution for those farmers.

“Whenever there was an IFA national protest in Dublin for dairy, beef or pig farmers Sean and the Anglesborough branch was always well represented,” said Mr Lavery.

Away from IFA, Sean has been very involved locally in supporting community activities. He enjoys his gun dogs and attending vintage machinery shows in Ireland and England.

Sean is married to Mary Mullins and they have three daughters and one son.