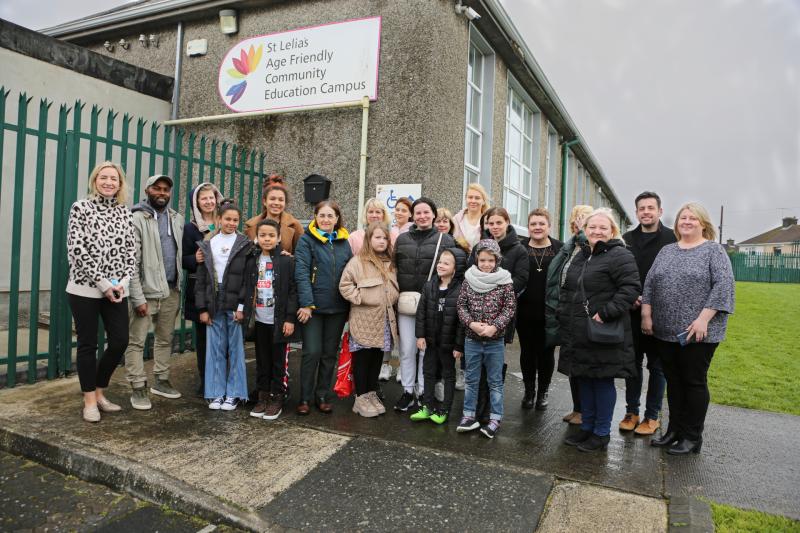 Ukrainian refugees who arrived in Limerick over the weekend, with volunteers from St Munchin's Community Centre. The former St Leila's School next door has been converted into an emergency shelter

UP TO 75 Ukrainian women, men and children fleeing the war-torn nation are being given refuge in a former primary school on Limerick's northside.

As part of a joint operation between St Munchin's Community Enterprise Centre, Limerick City and County Council, the HSE, the Red Cross, the Civil Defence, the LCETB, gardai and government, the old St Lelia's School in Kileely is to serve as an emergency shelter for refugees arriving safely in Ireland.

So far, 22 people arrived at the former school - whose classrooms have been converted into dormitories - on Saturday night, with more to follow in the coming days amid an operation co-ordinated by the gardai, Civil Defence and council.

Donations have been flooding into Linda Ledger, the manager of St Munchin's centre, which is providing the accommodation, as it runs the old St Lelia's Primary School, which up to now was an age-friendly campus.

"It really is emergency accommodation in the truest sense of the word," Linda told the Limerick Leader, "These people are sleeping in dormitories with people they do not know. They are sleeping on cot beds. I am getting a shower facility in today,  but up to now, they've been going up to the Redemptorists, and into my house to shower."

It's been acknowledged the cot beds in place are uncomfortable, and the centre's manager has said that locals are providing fold-up camper beds, alongside vouchers for Penneys so new clothes can be bought.

"These people are heartbroken, but so brave. They are so afraid, so shellshocked. Some of them have very little or no English at all. This is not the best or most ideal situation. But it's the best we can do, and our wraparound supports are brilliant. These people have nothing. I've seen kids wearing men's size slippers. What these people need is clothes that fit them. What I'm saying is good for people to donate is a Snuggie. That will cover them if it's cold. If it's hot they can take it off. It's better than a morning gown," Linda explained.

In a bid to try and provide more facilities for the refugees, two new modular buildings have been ordered, and will arrive on site tomorrow.

These will provide space for more beds, plus a cold kitchen, toilet and shower facilities for Limerick's newest residents.

Along with the 22 refugees, Linda said "three cats,  a dog and a bird" were also among the convoy.

An information stand has been set up by the Department of Social Protection, while volunteers connected with St Munchin's Community Enterprise Centre took the refugees into the city's post office to get Irish mobile Sim cards.

As is natural, there was a lot of nervousness and upset when the displaced Ukrainians first arrived - but since then, they have began to settle in.

"The difference from Saturday to yesterday is they are opening up more, they are feeling a bit safer. There is one man, who is 84, who wanted to go out and dig. So I sent him up to our allotment. He's come back and he's wrecked," Linda laughed.

"I'm very lucky because at St Munchin's, people are very good, they rally around. Today when people were down, they asked what they needed. I told them I needed two irons and an ironing board. I want to give them the tools so they can help themselves. They all want to learn English too," she added.

Learning the meal patterns of the new community has also been an education for centre volunteers.

"From what I've seen, they eat very little four times a day. It's Ramadan at the minute, so one person is fasting," Linda explained.

One of those people providing support is local Fine Gael councillor Olivia O'Sullivan, who is on the board of management at St Munchin's Community Centre.

She said: "The team at St Munchin’s, led by Linda Ledger, are to be commended for the way they all got stuck in to get the former school ready to be a temporary home for our European neighbours in desperate need. Seven weeks ago these people were living lives very similar to our own and their lives changed forever with the order from Putin to invade their country."

Cllr O'Sullivan said she knows the team at St Munchin's will "rise to the challenge", as will the local community, who will "open their hearts too in support, as they have been doing already."

For more information, and to donate, please telephone 061-458651, drop into the centre, or visit https://www.facebook.com/StMunchinsCommunityCentre/