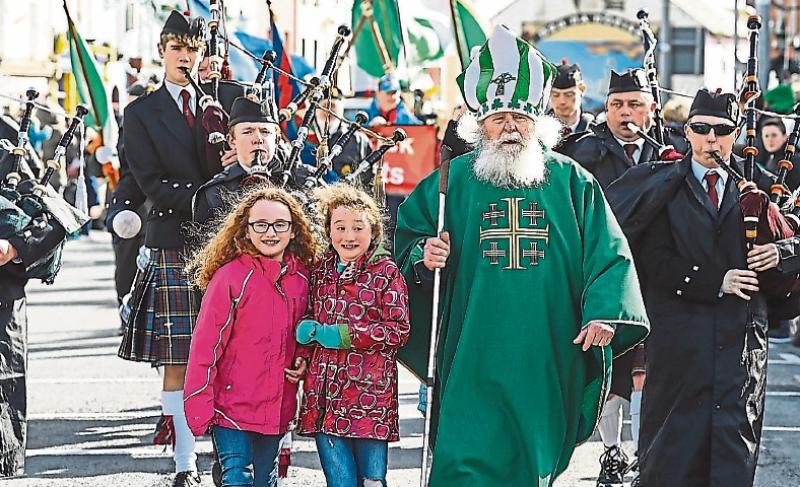 St Patrick, Mike Toomey, with his granddaughters Laura and Rena pictured at the St Patrick's Day parade in Bruff in 2019. The Bruff parade will return this year

IN A SURE sign that things are returning to normal, communities across Limerick are gearing up to hold St Patrick’s Day parades.

It was just under two years ago that 2020 parades started being cancelled due to the spread of Covid-19 across Limerick, Ireland and the world.

But now, meetings are being held ahead of some very special celebrations on March 17 next.

While the full details are yet to be confirmed in a lot of cases, parades are set to take place in Kilfinane, Bruff, Askeaton, Kilmallock, Rathkeale and Adare.

It’s hoped that celebrations will also take place in Castleconnell, Ballylanders, Herbertstown and Abbeyfeale, with meetings taking place in the coming days.

One place, however, which appears unlikely to witness a first St Patrick’s Day parade since 2019 is Newcastle West, with the president of the town’s chamber Cllr Tom Ruddle predicting the timeframe is too tight to organise something substantial.

“I don’t think there will be one. There hasn’t been enough of a lead-in time to get there,” he told the Limerick Leader.

However, he did say if enough people were willing to come and help out, there could be one organised.

But then he added: “If we can get something together, we will run with it. But we’d want to do it right. If you cannot do a good one, perhaps it’s better to wait until next year and do a proper one.”

Twenty kilometres west in Abbeyfeale, councillor Francis Foley said he is very hopeful of the town celebrating the holiday next month with a parade.

The chairman of the local organising committee, he confirmed: “We will be more than likely having one. A meeting will be called in the next few days. The general feeling out there is people miss the parades. We have been in lockdown for two years, so hopefully we can get together and enjoy some sense of normality.”

A meeting will be held in Ballylanders this Friday night on whether a parade will happen in the south Limerick village on March 17.

In Kilfinane, meanwhile, the community council has agreed to hold a parade, with its time to be confirmed.

With Covid-19 worries still to the forefront, safety measures will be in place. The council will over the next few weeks contact community groups, sporting associations, local businesses, schools and other bodies interested in taking part.

WATCH: Premiere of new show from award winning writer to premiere in Limerick

Meanwhile, with the city centre’s parade confirmed last week, alongside the International Band Championship the following Sunday, the local authority has announced a series of closures to facilitate these.

More than 60 roads are closed to vehicles from between 7am and 9.30am until 3pm, with parking restrictions kicking in from 4am on these days.