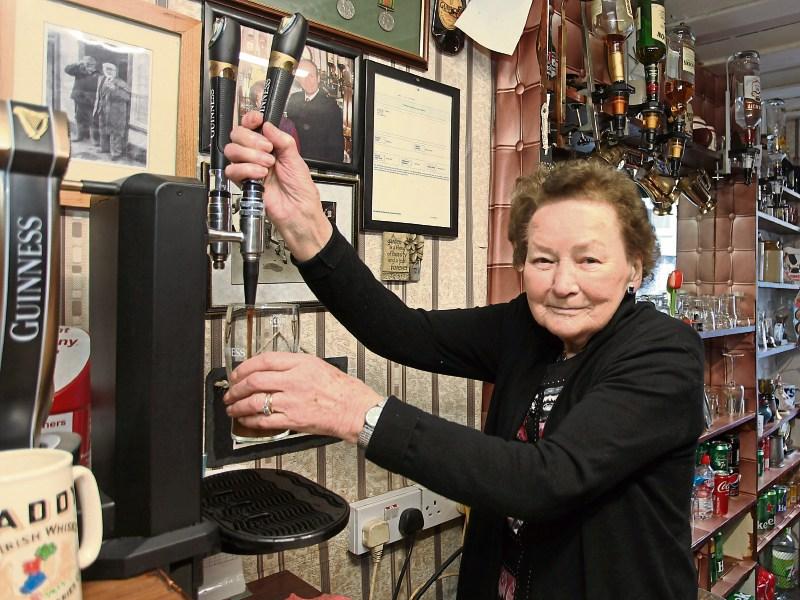 Margaret Carmody, known to one and all as ‘Peg’, can be found behind the counter every day in the family run pub in Hospital

A REMARKABLE Limerick landlady is entering her 66th year pulling pints behind the bar.

Ninety-two-years young Margaret Carmody, known to one and all as ‘Peg’, can be found behind the counter every day in the family run pub in Hospital.

Peg is surely the oldest publican in County Limerick, if not Ireland and perhaps Europe. Last January, The Manchester Evening News ran an article on a Donegal-born publican thought to be Britain’s oldest and longest-serving landlady.

Nancy Swanick, aged 89, celebrated half a century in the pub trade in Manchester but Peg has been behind the bar for 16 years more than that.

She has been helped in Carmody’s by daughters Catherine and Geraldine, son Joe and many grandchildren over the years.

“I taught them all how to pull a decent pint,” smiled Peg.

They say Guinness is good for you but it hasn’t helped Peg achieve her remarkably fresh face.

“I never drank myself. I never touched it,” said Peg, who is a mum of seven - Pat, Tommy, Joe, Margaret, Geraldine, Helen and Catherine. She combined raising her children with running Carmody’s.

Her late husband Joe, who passed away in 1995, was also very busy as he worked for Limerick County Council, had a farm and bought, did up and sold houses.

The public house was passed down from Joe’s parents - John and Catherine.

“I took over the running of it in November 1956. I had worked in a hotel in Kilfinane before I got married so I was well used to meeting people and dealing with the public,” said Peg.

The thought of not reopening after pubs were closed due to Covid never entered her head.

“I found it very hard when the pub had to close. I missed the company, the chats and the laughs with my regulars. I didn't know what to do with myself as being in the pub filled my day.

“I couldn't wait to reopen. I looked forward to meeting everyone again. I was delighted to open back up on September 25,” said Peg, who has customers of all ages.

“They call in for a drink and a chat. I have lovely quiet customers, no cursing or bad language allowed. We look after each other. I love seeing the young people calling. They are really friendly and pleasant,” said Peg, who agreed with the 8pm curfew being lifted on Saturday. She spoke of the importance of pubs to the social fabric of society and combating loneliness, particularly in rural areas.

The last question has to be what is her secret to looking and feeling so young? “Hard work and a listening ear,” replies Peg, who will turn 93 in May but shows no signs of slowing down.

She says she wants to continue on the business, the same as her mother-in-law before her. “I want to leave it as I found it,” said Peg, who is doing just that.