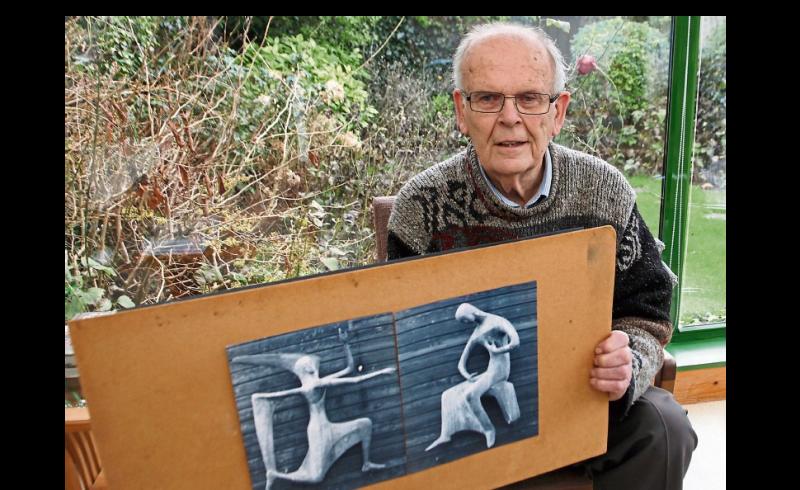 Cian O’Carroll hopes the story will jog people’s memories. He poses with photos of the sculptures gifted to him by Mary Nagle | PICTURES Brendan Gleeson

FIFTY years ago two sculptures of The Annunciation descended from the outside of a Limerick church and have never been seen again.

The figures were made especially for Our Lady of the Rosary Church on the Ennis Road, which opened in December 1950. It is known for its architectural quality and ecclesiastical art.

One of many famed artists commissioned was the late Ian Stuart – regarded as the finest Irish sculptor of his generation. His own story is fascinating as he is a grandson of Maud Gonne MacBride and son of author Francis Stuart. Nazi spy Hermann Görtz found shelter in their family home in Wicklow.

Born in 1926, Mr Stuart became interested in woodcarving at Glenstal Priory. Following his death in 2013, an obituary in the Irish Times wrote, “Examples of his early work include The Annunciation on the outside wall of the Church of the Holy Rosary, Limerick”. But, of course, it wasn’t anymore.

Mr Stuart’s work to celebrate The Annunciation – the announcement by the angel Gabriel to the Virgin Mary that she would conceive a son by the power of the Holy Spirit to be called Jesus – went missing in the early 70s.

Parishioner, Cian O’Carroll said they were taken down when the church was repainted in the early 1970s and haven’t been seen since. He kindly let the Leader photograph his original photos, gifted to him by artist Mary Nagle.

Mr O’Carroll, aged 90, hopes this story may jog somebody’s memory and the life-size wood-carved figures be restored to their rightful place. Perhaps they were left in a garage, an attic or maybe in storage and have been forgotten about.

“It is something that has been of interest to me for many years since I became a parishioner in Our Lady of the Rosary. It has been at the back of my mind and I am reminded of it every so often. I just though I should try and do something about it and the parish priest Fr Des McAuliffe was very supportive. I had a chat with the pastoral council and I spoke to Fergal Deegan who kindly agreed to help out and generate publicity,” said Mr O’Carroll.

He knows the missing statues were raised by the parish council at the time but “nobody had any ideas where they might be”. Gardai weren’t contacted in relation to the matter.

Mr O’Carroll said commissioning Mr Stuart at the time the church was built was a very enterprising thing to do. 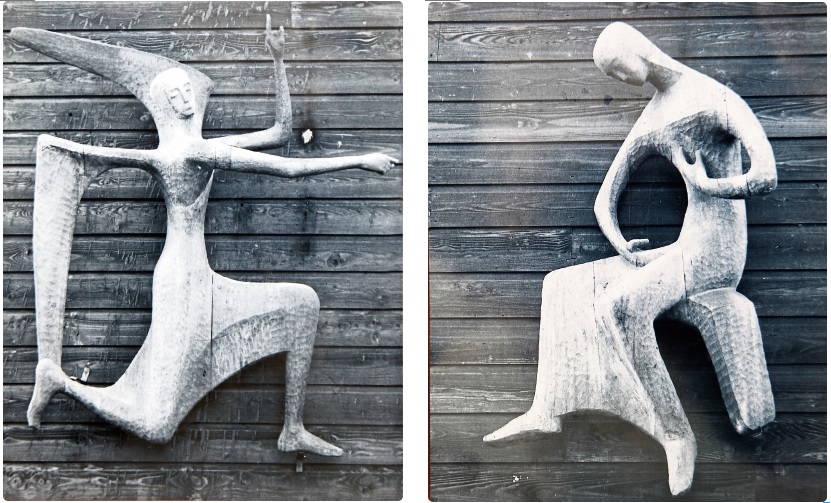 “Our Lady of the Rosary Church is exceptional because of the connection with John Hunt and the Hunt Museum. He gave advice in relation to the selection of artists to work on the church. When it was built and furnished it was way, way ahead of anything else in Ireland. It was far more progressive in art terms than anything that was being built in Dublin,” said Mr O’Carroll, who is a native of the capital.

While impossible to put a monetary value on The Annunciation by Mr Stuart, Mr O’Carroll said they are “very valuable”

“Those figures were on television. They were on the Angelus on RTE One in 1961 when RTE opened. They would have been known nationally. They were carved in wood, probably in teak.

“Even currently they would be considered as modern. They are impressionist figures,” said Mr O’Carroll.

If you have any information on the missing sculptures please email donal.oregan@limerickleader.ie and we will pass it on to Mr O’Carroll.