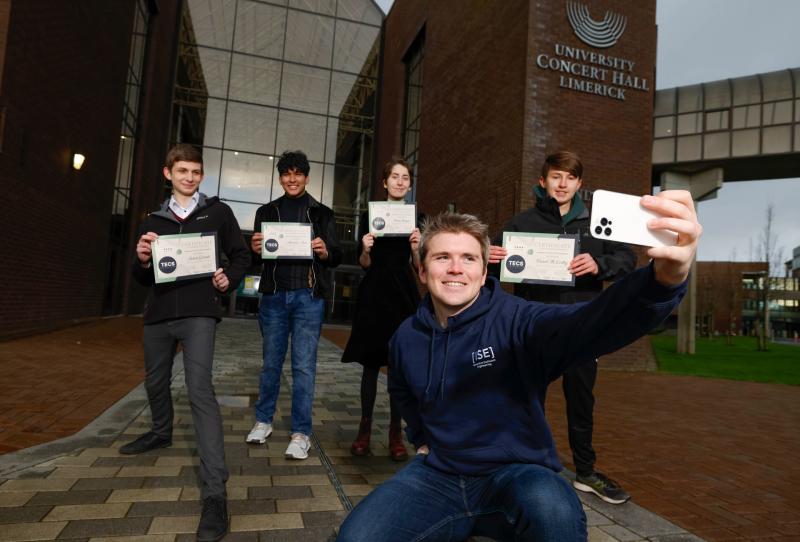 Billionaire John Collison pictured with award winning teenage students on campus at the University of Limerick.

The inaugural TECS awards ceremony at the University of Limerick was held to recognise a high achieving group of future young creators.

John Collison, Co-Founder and President of Stripe presented awards to a group of talented teenagers who took part in a new programme to “find and reward people making new things in a four-week competition.”

Fun to meet the winners of the @joinpatch_ and @ImmersiveSE TECS awards at @UL today, including overall winner Abutalha Alam (a fellow @CastletroyC student )! Only 26 days left to remember to put Immersive Software Engineering on your CAO pic.twitter.com/MRGcWXm9hY

The former Castletroy College student, who along with his brother Patrick built Stripe, a digital payment company, has an estimated net worth in 2022 of $9.5 billion and resides in California.

The 31-year-old, who took the accolade of the youngest self-made billionaire in 2016, has yet to confirm if his company will begin trading publicly.

The TECS prizes for 16 – 21-year-olds, were awarded based on how much progress projects made from week to week.

Speaking to the prize winners, John Collison stressed that what the students had done is a perfect example of what is looking to be achieved in the Immersive Software Engineering programme at UL, with the projects really demonstrating the whole idea behind it.

“You have to just jump in. That is what we are trying to do with this course and the TECS project. You want to be somersaulting off the deep end into actually learning it.

“We are just so blown away by the projects. We would really encourage you all to consider careers in software engineering, however you choose to do that.”

At the ceremony, he spoke of the importance of investing in the future of software engineers and mentioned that Stripe is continuing to expand here in Ireland.

Their Dublin office, located near the Grand Canal Dock, has 500 employees, with plans to expand that by a further 1,000 in the next five years.

First day of school for new Limerick headmaster and principal

He lauded UL as having the best computer science programme in Ireland and hopes that it will produce the next ‘Stripes’ and the allow the Irish tech industry to selfishly bloom.

He also stressed that the rise in corporation tax in Ireland, would not inhibit Stripe or other companies from hiring, and that being on the periphery of Europe was a significant advantage.

“We think it is a fabulous career, we think it is one of the best kept secrets and so we would love to have you here at UL, or however you choose to do that but we think you all have fabulous potential, and we can’t wait to see what you all do with it,” he concluded.