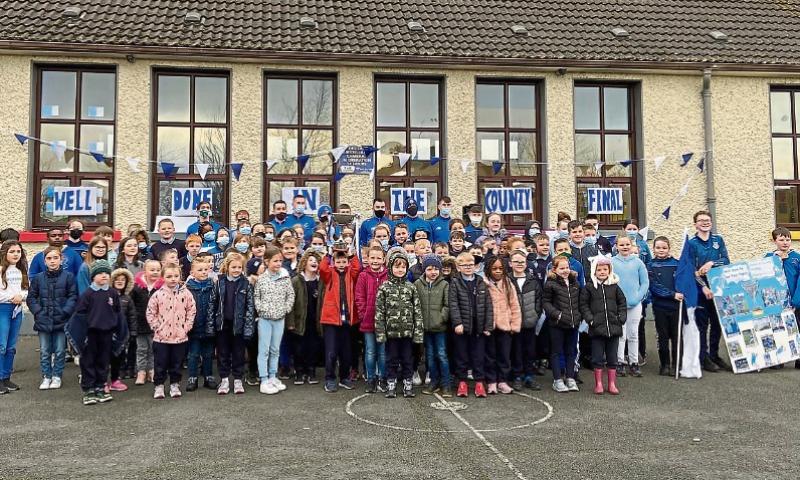 Three cheers: The victorious Caherline team got a heroes’ welcome on a visit to Caherconlish NS

FORGET Santa, Caherconlish NS pupils were more excited in the run up to Christmas when past pupil , Andrew Brennan presented the school with a signed and framed jersey of the Caherline team who won the County Junior A Final in November.

Andrew spoke about his time playing hurling in school and how much he enjoyed it. When one pupil asked how he has managed to become such a skilled free taker, his answer was simple, “Practice!”

Principal, Patrick Ryan praised the club and players saying: “The signed framed jersey was such a thoughtful gesture and one we’re extremely grateful for. It will be hung proudly in our school for everybody to see”.

A number of past pupils on the team called to meet all the pupils and talk about their county win.

They arrived to a heroes’ welcome with blue and white bunting and flags on display and children cheering. The boys and girls were all very eager to meet their local heroes who kindly signed their hurleys and sliotars.

There is a huge school connection as there are pupils’ dads, brothers and cousins playing, along with two staff members’ nephews, said Mr Ryan.

There was great enthusiasm in the lead up to the county final, said teacher Carole Cleary. She and her fourth class English group set about interviewing the players.

“The children really became journalists and compiled a list of questions to ask. They then typed them up and created a player profile which we uploaded onto our school Facebook page.

“We gained an insight into what life is like as a hurler, their highlights of the championship and the importance of fitness. The players also filled us in on their team’s winning formula, how tough it is to play hurling between lockdowns and restrictions, and how special it is to play alongside family members,” said Ms Cleary.

When asked what was the best hurling advice to give to young players, the players advised:

“To never give up, always aim to improve, embrace it and always back yourself”. Ms Cleary thanked the players for answering all their questions as it meant a lot to the pupils.

Mr Ryan added: “We really could not be prouder of our past pupils who represented the school and parish so well this year and a huge congratulations to everybody on the team on a special year of hurling in the club.”

The entire school sang a reworded version of Neil Diamond’s hit  Sweet Caroline. The players then told the children they deserve a night off homework in January to a big cheer!