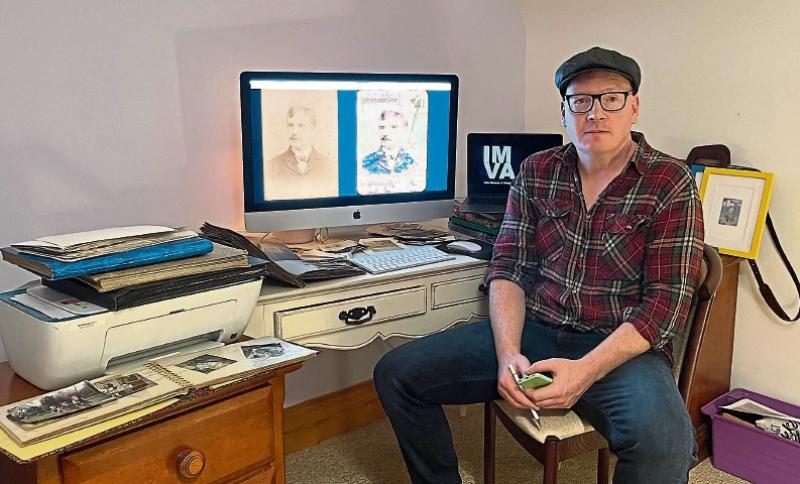 A MAN who hails from the village of Effin is hosting an art exhibition in the German capital of Berlin this month.

Daithi Magner, the founder of the newly established Irish Museum of Virtual Art, is to jet over to Berlin for the show, called Übergang, which means transition in English.

It kicks off on Saturday, December 11 and takes place at the Galerie Westphal Kunsthandel.

In the show, Daithi will be experimenting with using old family photographs and making one of a kind digital artworks out of them.

As well as the exhibition opening at 6pm German time, there will also be an opportunity for people to check the exhibition outline, with more information on how to tune in on Daithi’s own web site at dmagner.com/ubergang.

Daithi actually specialises in sculpture, making artworks from found objects – so with this exhibition, he is doing this to old family photographs.

“I am a sculptor making artworks from found objects. They are like three dimensional collages. I use a lot of old trinkets that my grandfather collected to make surreal sculptures based on my thoughts of growing up in rural Limerick. There is a magic to country people, and I have fond memories of growing up there,” Daithi explains.

After leaving Effin, the artist travelled to a number of different countries, before attending the Institute of Art, Design and Technology in Dun Laoghaire where he earned a degree in production design for film. He’s been mainly working on film since then, largely in London.

But Daithi continued to be keen to create new art, and during the early stages of the Covid-19 lockdown last year, he was back in his home parish, where he started doing digital drawings in what was an enforced period of free time.

It is the work from this which has paved the way for his exhibition in Berlin, and he’s keeping his fingers crossed he can fly over to Germany from Ireland’s west coast, where he is currently working on a television production, later this month.

As for next year, his main aim is to get the Irish Museum of Virtual Art up and running both physically and virtually.