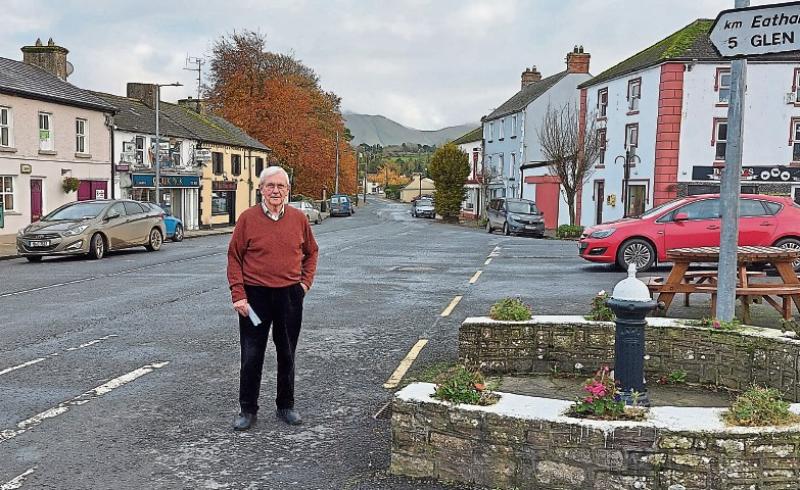 Tim Ryan pictured this week in his beloved Galbally

“OPTIMISTIC” - was a word used several times by chairperson of Galbally Tidy Towns committee, Tim Ryan, when he spoke to the Leader of the village’s rating in this year’s national competition.

While Tim admits the past 19 months have been “very tough” on everyone due to  Covid-19, there is positivity in the air around the Galtees, he says.

“We went up nine marks. We gained marks in practically all the categories,” he says with pride.

This year, Galbally secured 341 points compared to the 332 points they bagged in 2019 when the competition was last held.

“We’re quite confident that we will go up again because the village has improved an awful lot,” he points out. “Two grocery shops are being amalgamated and a number of houses that were unoccupied are being repaired and we’re wired up for high-speed broadband. I live in the middle of the village and I see what’s going on and we’re very optimistic. The last report in 2019 was very optimistic ”

Due to the pandemic, the group found it near impossible to meet up together, meaning much of the work had to be done on an individual basis.

“You’re apprehensive all the time,” he noted. “One of the big losses was the Men’s Shed - they couldn’t meet either and they were a great help to us as well as our FAS scheme. We have great communication with the council and there are a number of projects in the pipeline which they have promised to do.”

Not alone is Tim the current chairperson of Galbally Tidy Towns but he was also chairperson back in 1994 when the village took the National Tidy Towns Award which was claimed by Ennis this year.

“We have an awful lot of clubs intertwined and there are a lot of individuals involved as well who would be working away on their own,” he said.

Galbally were named the second tidiest place in the county after Adare which scored 343 points. Just a single point behind Galbally was Ardpatrick with 340 points. “

We were delighted to read that through TidyTowns involvement you have developed lifelong friends in three counties in addition to improving the beauty of your village,” noted the judges in the adjudication report on Ardpatrick.