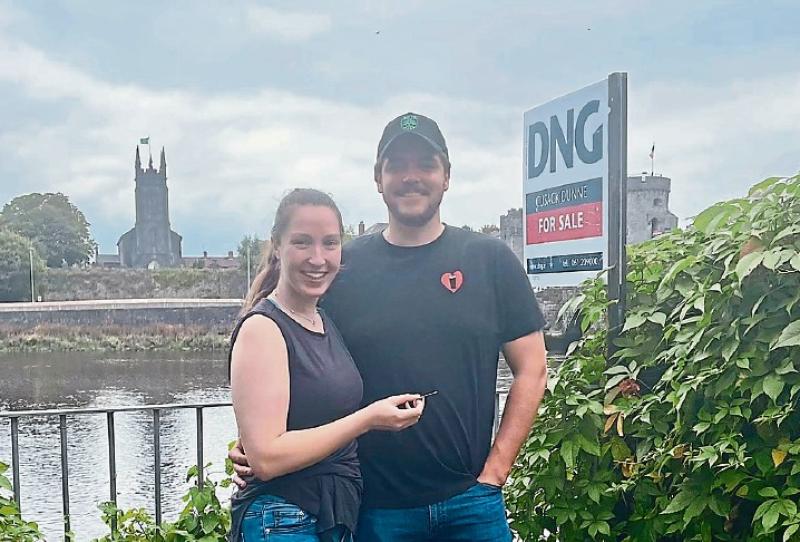 Home sweet home: Owen Webb O’Rourke and Dervila Kelly in their new home in Thomondgate which they were originally outbid for

THERE have been countless reports compiled, surveys done and articles written in the last two years about the shortage of housing and price increases.

But what is the experience like for a young twenty something couple trying to get their feet on the housing ladder? Owen Webb O’Rourke, aged 29, from Kilmallock said buying a house is like “Walking through quicksand with weights strapped to your back”.

He and his partner Dervila Kelly, aged 28, from Clare, started looking in the middle of 2020. She is a primary school teacher while Owen is working in a family development consultancy company, mainly in the primary healthcare field

Owen had been living at home until he was 25, turning 26. After finishing college, Dervila lived in Dublin for a couple of years where she commenced her teaching career.

“She got a job in Limerick as we wanted to be closer and she loved the city having been to college here so in 2018 we started renting in Limerick city. We always aimed to buy together, but things really started getting serious in late 2019. We had renewed our lease on our apartment, thankfully our landlord at the time didn't raise the rent but had let us know that he was planning to the following year so from then on we just knew we couldn't afford things to go too much higher and felt that if we could buy this was the time to get serious about it,” said Owen.

Saving the 10% deposit was “incredibly difficult” said Owen, who credits Dervila with keeping him in financial line and getting them over the line.

“I personally am a disaster organisational wise when it comes to money and saving. Dervila, to be fair, was excellent. She had always been on top of her savings and had a much better routine. She had an app that she had been using for a while that she swore by and in the end, it was what allowed us to buy when we did. It was very much when payday came along, put away some share immediately so that I wouldn't have the opportunity to spend it.”

But getting the deposit together leads to the agony of being outbid before the ecstasy of realising your dream.

“On being outbid I'll give you the best example of all - the house we ended up buying, we set an upper-end limit of €185,000 where we would pull out of the bidding as we weren't willing to go any further. The house went on the market at €155,000 and there were a number of interested parties including a cash bidder of €165,000.

“There was only one other party consistently bidding against us at the end. They went to €185,000 so unfortunately we were incredibly disappointed but knew that the house needed some work and we weren't going to be able to afford that work if we went higher.”

That feeling is one Owen wouldn’t wish on anyone.

“The disappointment is manifested a fair amount by your own hopes and visions. If you find a house you like in a viewing you end up imagining the future there and all the things you'd like to do to make the house your own. You think about the decor or where you'd put a couch. You start thinking about having friends over and the memories you want to create. Then you're outbid and those wishes are all crushed.

“It's a poor comparison but the way I've been describing it to others is it's like when you buy a ticket in a €100 million-plus Euromillions having never bought a ticket before and in your head you start spending the money. Despite the tiny odds of winning there's a pang of disappointment when your numbers aren't drawn. It's that feeling amplified by 1,000. With such a shortage of houses, you don't think you'll ever find a place as perfect even though the place you are looking at isn't near perfect in the first instance.”

Owen said the stress is so extreme when you get serious about looking that it's unbearable.

“Everything is on a knife edge. You start thinking about every expense, every coffee, every sandwich and questioning it. If your friends ask you for dinner you nearly get resentful. It messes completely with your head.

“I genuinely think it's the way my age group have been conditioned by the market and seeing nonsense headlines from people far older than us saying things like ‘If you want a house, stop buying avocado toast’. That was genuine advice from an Australian millionaire. I remember seeing this and just genuinely thinking, ‘Would he ever feck off’, pardon my French."

“It was incredibly difficult but I remember on multiple occasions on nights out or getting lunch with Dervila saying, ‘We're not feeling guilty for enjoying ourselves while looking for a house’. We still struggled with that but I think it's important for people to understand that your few drinks, going for dinner, going to the cinema, buying new clothes or shoes will not be the reason that you won't get a mortgage.”

But a week after they lost the house the auctioneer rang to say the top bidders had pulled out and gave them the option to purchase. Owen and Dervila jumped at it and moved in last September.

“Getting the keys was strange in all honesty. We purchased in Thomondgate. I guess I'd been so burnt out by being outbid that I just expected something bad to happen and that it would be taken off us. The day we moved in was an amazing feeling. The pint we had in JJ Bowles afterwards might still be the best pint I've ever had.”

Owen says Limerick is on the fast track to becoming like the Dublin housing market with the “massive lack of houses and the difficulty looking for planning”.

“I don't see things improving. We have a massive supply of derelict, beautiful Georgian buildings in Limerick city centre that young people would love to live in. It would bring life back to the city centre but they are being completely blown out of it by office development, which we see from the pandemic is becoming redundant. Getting on the housing market currently is one of the most difficult things you will ever do. There arguably has never been a more difficult time.”

The advice from Owen and Dervila to similar young couples is to use a mortgage broker and don't be too hard on yourself.

“I said it earlier but when going through the process you can still enjoy a few drinks or dinner without beating yourself up. Everything you'll read, hear or watch will be telling you to squirrel every last penny away but honestly, it's not sustainable for your own mental health. This process is stressful enough without you being hard on yourself for enjoying your life.”