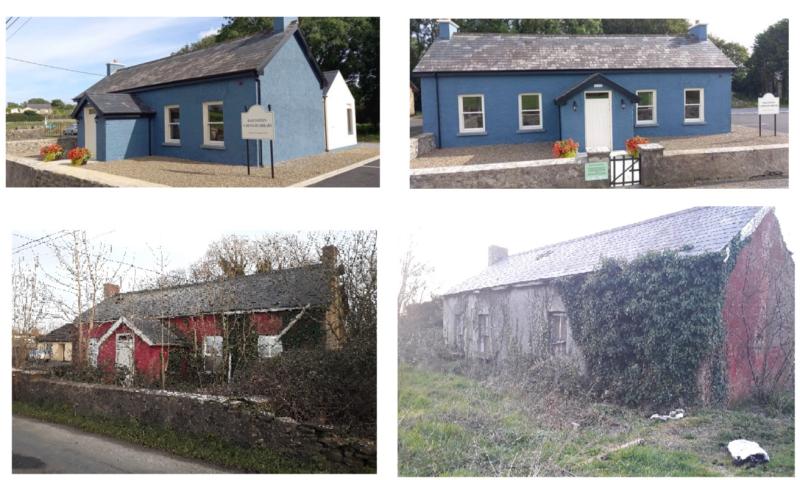 The refurbished Carnegie Library will be officially opened this Sunday

OVER a century has passed since the Carnegie Library first opened its doors to the small, rural community of Ballysteen. Now, following a massive campaign of restoration, the library is ready to re-open and take its place, once more, at the heart of the community.

It has been a challenging project for the small and hardworking committee headed up by the energetic Siobhán Costello, a project not made any easier by Covid-19 restrictions.

Their achievement is all the more impressive given that, despite the €270,000 price tag of the project, they are now “practically debt free”.

“We have never taken out a loan,” Siobhán said in advance of this Sunday’s official opening.

The last event in the Library, as it is always referred to by locals, had taken place in 2004, Siobhán reckoned. But it was run-down long before that. “It was in very poor condition,” she explained with some understatement.

Despite that, the library occupied a special place in people’s hearts.

Caroline Sheahan, a member of the project committee, recalled going to school there in the 1960s when the “new” school was being built down the road.

And she also had great memories of social occasions there. “There was nowhere else to go,” she laughed. “Because you were young, you wouldn’t get permission to go beyond the library. It was walking or cycling only so you came here.

For Caroline, the céilithe were the stand-out occasions, when coats were hung in the small porch and someone stood behind a stool with a biscuit tin to take the admission money.

There was, she recalled, a stage for the musicians and teas were handed out at one end where the only source of heating was the open fire.

How they managed to serve teas when there was no running water or no sink is a mystery to her still. “But it was magic.”

The library also hosted local concerts, political meetings and of course the library. That, Caroline recalled, was a big, locked cupboard where you came after Mass to change your books.

By 2017, however, all of that was but a memory, along with the village’s two shops and its post-office. “We had nowhere to start. Any other community had a place to meet but we had no place for meetings,” Siobhán said.

But then the library became available to buy, and so, spurred on by the need to tidy an eyesore and inspired by the hope of a community space, the first steps in the restoration project got underway. A new committee was set up, a €100,000 grant under the Town and Village Renewal Scheme was secured and the building itself was brought back into public ownership thanks mainly to the generosity of a philanthropic organisation the Tomar Trust.

Other help followed, from West Limerick Resources, from Limerick City and County Council and from the JP McManus Foundation.

But, as Siobhán explained, a massive fund-raising drive was instigated locally with regulars such Cash for Clobber and Split the Pot as well as concerts, church gate collections and scrap metal collections and Buy a Plaque.

There was also, she added, a huge amount of physical work done by local volunteers from the age of 15 upwards. “The amount of voluntary work is what sealed the deal,” Siobhán said, adding that contractors were also persuaded to do something extra for free.

The mammoth restoration job involved clearing the site, and cutting back the vegetation around the building. The roof was secured, new windows installed, the original double-doors repainted and two small extensions built at the back to house a cosy kitchen and a toilet block. The original lime-mortar walls were repaired and painted, new heating installed and a new ceiling and floor put in.

“We do need money to fence off the boundary, to finish some external work and put up a shed for storage,” Siobhán said. And there will be ongoing maintenance. But she is confident they will get there.

Already, the building is in demand from the Inbhear choir and there are plans for regular card-games. But the big hope is that the new centre will give rise to a new wave of community activity, with new groups and new events emerging.

Meanwhile, excitement is rising in advance of this Sunday’s official opening which takes place at 2pm.

OBITUARY: Limerick village truly lost a dear friend to everyone