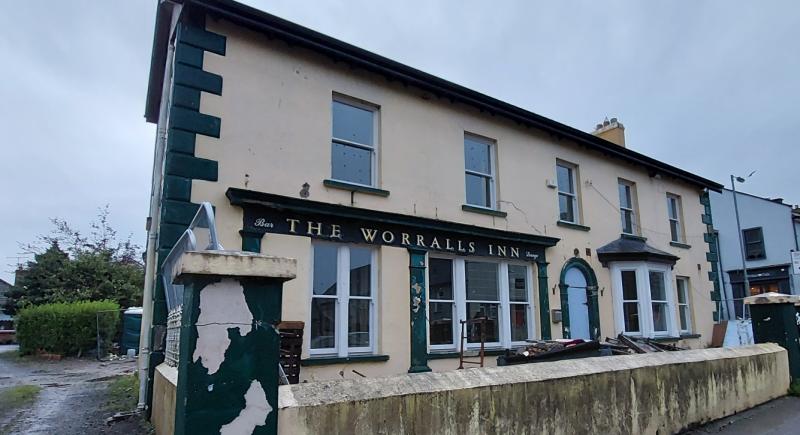 A GROUP formed to promote and preserve the character of Castleconnell has formally objected to plans to turn a historic pub in the village into residential units.

LOVE Castleconnell have made a number of submissions in relation to the proposed change of use of the ground floor of the Worralls Inn from two commercial units to two residential units.

The iconic building has been part of the village’s streetscape since the 1820s. The Worralls Inn was a hotel during the high water days of the River Shannon when the fishing rod and salmon fisheries were big industries. It had lain idle for a number of years and was badly damaged in a fire in 2014.

The applicant - RR Property Fund - which has submitted the planning application to the council was previously refused permission for a separate development at the premises.

It wanted two self contained office suites on the ground floor, two one bedroom apartments on the first floor and an extension at the rear to provide seven apartments. The Worralls Inn is a protected structure.

The refusal, by the local authority, was appealed to An Bord Pleanala and the board decided not to accept the inspector's recommendation to refuse permission. Permission was granted subject to 20 conditions in 2019.

Now, RR Property Fund is seeking planning permission to change the self contained office suites on the ground floor into two residential units.

Tara Hartigan, chairperson of LOVE Castleconnell said they are happy to see the development of this eyesore and "bringing the Worralls Inn back to its former glory".

"However, making it a residential property will be to the economic detriment of the village, which already has little or no commercially viable properties available, therefore the advancement of the village is in dire jeopardy," she said.

They say the development is not in keeping with the local development plan which states: "Ensure that proposals at ground floor level within the village center are restricted to shopping and closely related uses such as banking.”

LOVE Castleconnell adds that they have been approached by numerous individuals, who wish to locate businesses in the centre of the village.

"There is simply no units available to them. This causes great concern for the community and will further damage the economic wellbeing of an already struggling village," they say.

There have been a number of other observations made by private individuals. The closing date for objections and submissions is Wednesday, October 20.