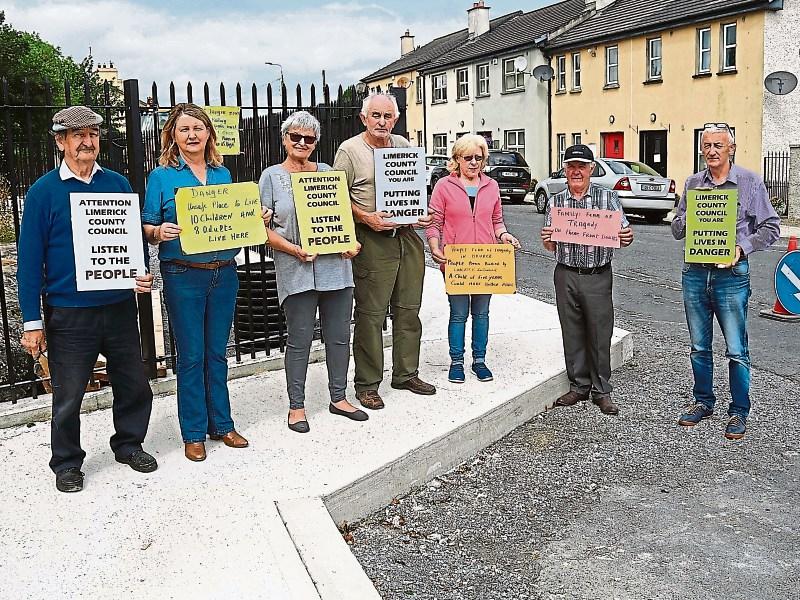 A “BREACH of planning guidelines pushed under the carpet” or a “political sham” was the outcome of a special council meeting, according to different councillors.

It was called to “receive an update in relation to planning enforcement issues in Bruree”. This all dates back to the summer of 2019 when hundreds of signatures were collected, opposing road and street works.

A high concrete kerb was installed by the council that narrows the road at the Kilmallock side of Bruree. In conjunction, a homeowner constructed a long railing on his land outside his property. This space had been used for decades for parking, especially at Mass times.

Cllr Mike Donegan, then cathaoirleach of the Cappamore-Kilmallock municipal district, confirmed the council was taking enforcement action against the landowner in relation to the railings, which were constructed by then councillor and now TD, Richard O’Donoghue who has a construction company.

Fast forward to April 2021 and a number of Bruree residents received correspondence from the council to say that the “proceedings have been withdrawn following legal advice from the council’s legal agents. Therefore, the council will be taking no further action on this matter.”

Cllr Martin Ryan, cathaoirleach, said the purpose of the special meeting this month was to ask the council – on behalf of the residents of Bruree – to explain why the matter was withdrawn. This was supported by Cllrs Mike Donegan and Ger Mitchell.

Cllr Eddie Ryan, who had the backing of Cllrs Brigid Teefy and PJ Carey, didn’t agree with the special meeting being called.

“We could have a meeting five days a week on planning enforcement. Our roads and area engineers have discretionary powers. This is an insult to them,” said Cllr Eddie Ryan, who added that it was “nothing short of a political witch hunt”. Cllr Martin Ryan said they were entitled to ask why proceedings were withdrawn.

Dara McGuigan, of the council, said the case had been listed before Kilmallock Court but was adjourned due to Covid. He said information was received by enforcement.

“It would appear that there may have been a difference of interpretation between council staff and the landowner. I’m not sure whether heights (of the railings) were agreed. On foot of that information one of the inspectors spoke to the solicitors and the advice was that the contradiction in evidence may cause reasonable doubt and the case was unlikely to be successful,” said Mr McGuigan.

Cllr Donegan said railings up to 1.2ms don’t need planning but the ones in Bruree are 1.8ms in height so they require planning.

“You have confirmed that it is still an unauthorised development. Residents have to look at them. It is not satisfactory they are not being dealt with. If the council are going to push this under the carpet then somebody else is going to put up railings 1.8m in height.

“They are going to be told they’re unauthorised. They can challenge that now and say you are allowing them in Bruree. This is double standards,” said Cllr Donegan.

Cllr Ger Mitchell said it is a “breach of planning guidelines”.

“That structure is unauthorised development,” he said.

“Either we abide by planning or we don’t. This is going to bring the ire and the wrath of the public. If you create ambiguity you get planning – that is the message being given to the public. You either have guidelines or not. That’s some message – ambiguity gets you planning. You are questioning the whole planning process. I’m so annoyed with what is going on,” said Cllr Mitchell.

Cllr Eddie Ryan said the conclusion of this is there is “a bit of ambiguity around the height of the railing”.

“The landowner works with Tidy Towns and has the best interests of Bruree at heart. He gave the width required by engineers. it looks well. If railings were cut down tomorrow it could make them a hazard,” said Cllr Eddie Ryan. He concluded by saying it is a “political sham”.

Cllr Donegan said: “It is a breach of planning”. 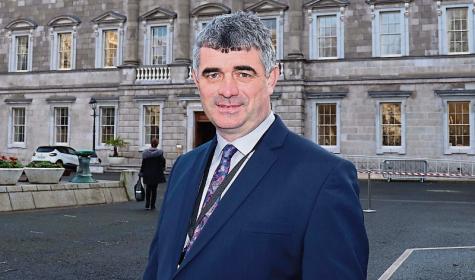 DEPUTY Richard O’Donoghue (pictured) has issued a statement to the Limerick Leader to “put the record straight” after the special council meeting on Bruree.

He described it as “a waste of taxpayers’ money” by Fine Gael and Fianna Fail councillors on “a political witch hunt”. The then councillor and now TD constructed the railings which has drawn the ire of some councillors and bemusement of others.

In 2019, Deputy O’Donoghue said the council contacted Austin Leahy (owner of the Railway House, Bruree) and Bruree Tidy Towns about running a footpath to and through his property and concreting the area at the railway bridge where the bottle bank is located on Mr Leahy’s property.

“The council produced a map of the proposed works to Tidy Towns and Mr Leahy. On further discussion the map was altered at the council’s request to widen the road which meant realigning the entrance to and the kerb line into the entrance at Mr Leahy’s property. This was agreed by Mr Leahy and myself before the works commenced.

The council’s enforcement section sent a letter to Mr Leahy that he “must cease work on the fence and to reply to the letter within 10 days”.

“Mr Leahy, through Power Solicitors, replied to the letter by email and by post. Through interaction with the council’s enforcement and by providing proof that all works carried out were agreed with the council and backed up with copies of dated agreements, the council withdrew the enforcement notice and sent a letter to Mr Leahy and his solicitors that they were no longer pursuing the legal action,” said Deputy O’Donoghue.

The Independent TD said he is “very disappointed in the Fine Gael and Fianna Fail councillors in Cappamore-Kilmallock”.

“They have wasted taxpayers’ money on two special meetings, legal expenses, valuable engineer and council staff time on what seems to be a political witch hunt  – using the media to tarnish community people that work with Tidy Towns, voluntary groups and county councils for the betterment of Limerick. The money and time that has been wasted would have gone a long way in getting a much needed playground and car park for the people of Bruree and surrounding areas,” said Deputy O’Donoghue.