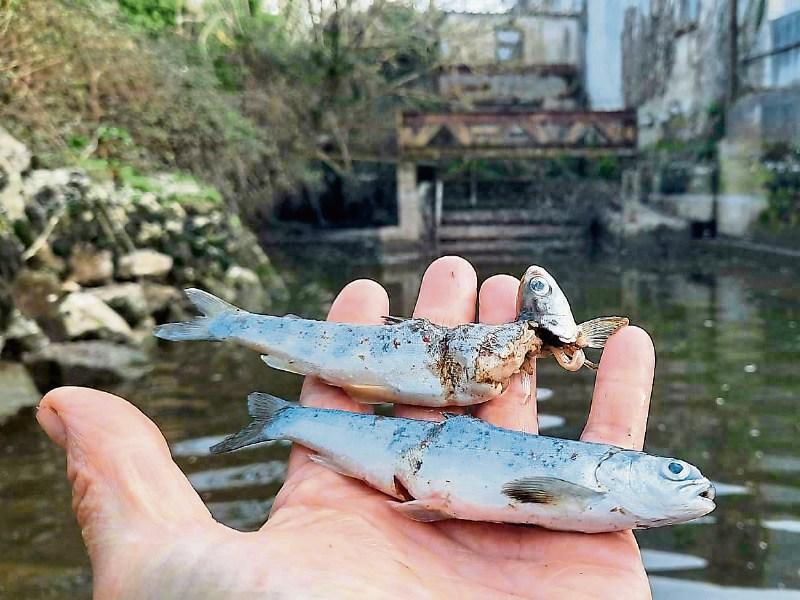 This photograph was taken by the Deel Anglers

JUVENILE salmon or smolt are being mangled in the hydro-electric turbine run by the Kingspan Aeroboard company in Askeaton, the West Limerick Deel Anglers have claimed.

And they have appealed to the company to place grills at the top of the tail-race at Askeaton to protect salmon smolt and eels on their journey to the sea. They also want a grill or barrier placed at the lower end so that adult salmon going upriver are not caught in the turbine or left floundering in the pond.

Ger Hayes, secretary of the angling club, said they believe that electricity generation should stop each year at the peak season for the salmon smolt, May/June, to give them maximum chance.

“This year they (Kingspan) agreed to that when we identified there was this fish kill,” Mr Hayes said. “They gave their word they wouldn’t run the turbine until the salmon smolt run was finished in 2021.”

If fish stocks on the river are to be restored, these measures are vital, he argued. “This is the gateway for migratory fish species into the whole catchment area,” he said.

In a statement from Kingspan, a spokesman said the company “is aware of the concerns raised and we are working with Inland Fisheries Ireland”.

“The turbine is not in operation and will only be used when an agreed approach with IFI is finalised. Sustainability is a core pillar of Kingspan’s approach to business and we are committed to working with statutory bodies and relevant stakeholders to support the biodiversity of the river Deel and surrounding areas.”

Meanwhile the Deel Anglers, which is an amalgamation of the Askeaton Angling Club and the Rathkeale Angling Club, also wants the Office of Public Works to get involved in improving other aspects of the river.

The weirs, Mr Hayes explained, need to be re-examined and modified for ease of fish passage. They are particularly concerned about the weir above the tail-race. They are also adamant that water quality in the river needs to be addressed urgently and that incidences of raw sewerage entering the river need to be stopped.

The Inland Fisheries Board, replying to questions put to them by the Limerick Leader, acknowledged “the salmon run in the River Deel is significantly below the level that sustains a healthy population”.

“The Deel has a number of significant pressures, including a series of weirs in the Askeaton area which negatively impact on the ability of fish to freely migrate,” a spokeswoman said. “The weirs also damage the natural habitat of the river. Inland Fisheries Ireland has recently secured funding to examine options to improve fish passage at these weirs.”

The organisation, the spokeswoman continued, “Will work with the various stakeholders, including Kingspan, which operates the hydroelectric facility at Askeaton, to identify potential improvements with the aim of restoring conditions on the River Deel to a more natural state.”