Limerick dad in bid to gift daughter his kidney 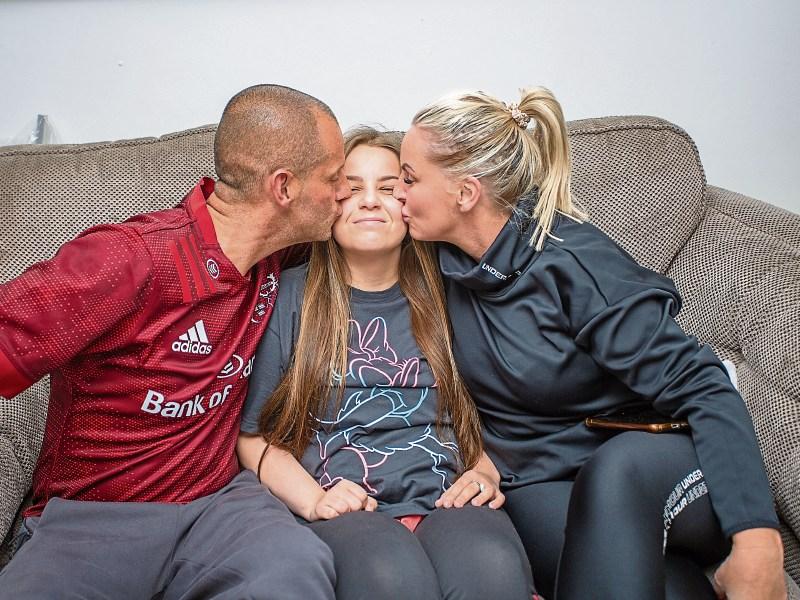 A LIMERICK mum-and-dad are in a race against time to find their desperately ill teenage daughter a new kidney.

Ali Kelly, 16, has been in and out of hospital since she was born and is in dire need of a new kidney to ensure she can lead a productive life.

Her father Joe – who admitted she is being “kept alive by a machine” – has started tests this week to see if he can donate a kidney.

Both he and Ali’s mother Virginia have appealed to people to come forward to join the donor register.

Ali, whose family hail from Moyross and have also lived in Annacotty, was born with polycystic kidney disease, which means the organ is full of holes.

Despite being given little hope, she had her first transplant at the age of four.

Last year, she received dialysis at home – which meant that she was hooked up to a machine for up to 14 hours a day.

However, now, the youngster must travel up to Temple Street Children’s Hospital in Dublin four times a week where a tube is inserted through the main artery of her heart.

Joe said: “At the moment, it’s torture for her. She is on dialysis in Dublin four days a week, and is hooked up to a machine for a minimum of six hours.”

Ali has been forced to miss a year of school.

“She does get quite emotional and quite low. Her weight fluctuates all the time. She’d be really skinny and get full fluid, then be quite big. So you’d be worried about her mental health as well,” Virginia explained, “But you want her mind to be strong – it has to be strong.”

Since Ali – the youngest of four children – was 11 days old, she has been in hospital.

“She never ate for the first four years. She was tube fed. But then she got her kidney transplant – we’ll never forget getting her out of the hospital, and we went to McDonalds where she had a Big Mac Meal. It was the size of her face,” the parents laughed.

As a consequence of the many surgeries Ali has had, her stomach is tied and twisted, making vomiting impossible.

Tragically, it was also discovered that the teenager has no uterus, something which means she will not be able to give birth.

Joe says if doctors decide Ali is not well enough, they will not put her forward for a transplant.

His bid to donate a kidney began this Monday, and involves the checking of his bloods to ensure he is a compatible match to be able to donate.

If Ali does enjoy a successful transplant, Joe and Virginia said it would be like “winning the lottery” – with many of her other medications cut as a result.

The family have decided to tell their story in the hope it will persuade other people to join the donor register, with Joe saying it should be a case of opting out of it, rather than opting in, believing most people would gladly help.

“You’d read someone’s story on the paper and you’d say it’s very sad. But then you’d flick the page. You don’t have to think about it. But it could be your child. I never in a million years expected this would happen. All the rest of my children are healthy,” Virginia said.

Both mum and dad are immensely proud of their daughter, Virginia saying “She is beautiful, absolutely phenomenal. She sits down there and she would melt you with her singing. She’s very kind and very cuddly. Just a great kid for what she’s going through.”

Ali said she hopes to be a beautician or a nail artist when she grows older.

Asked how she has coped with all the upheaval in such a short life, she said softly: “I just get on with it.”

SLIDESHOW: End of an era for Limerick shopkeeper following 44 years in business