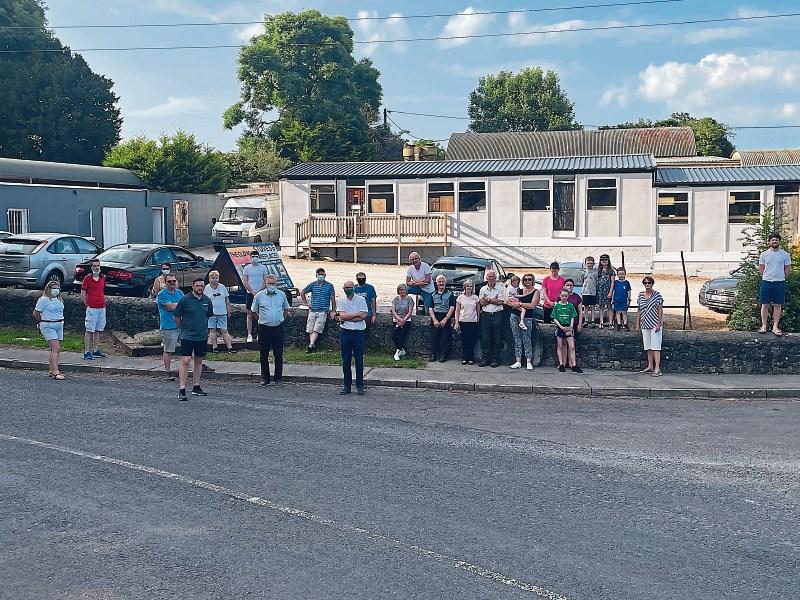 On what was one of the hottest days ever in West Limerick, dozens of householders in the small community of Old Mill, a few miles from Newcastle West, had no water.

But for these residents, it wasn’t the heatwave that was the cause of the problem, although communities right across the county were experiencing shortages as a result of low water levels and high temperatures.

For Old Mill residents, water is a problem 365 days of the year, sun or snow.

And according to Nora O’Connell: “We have been putting up with it for 30 years.”

Their problem is that the water supply has been and is intermittent, coming and going every day and nobody knows when they will have water or when the taps will run dry.

And it can happen anytime. On New Year’s Day, for example, there was no water, all day, one householder explained. Sometimes, it’s 11 at night when the water starts running again.

The problem, when they have been told anything, is lack of pressure, something which a new pump might or might not remedy.

But the heatwave has compounded the problem, local resident Tom Higgins explained.

And people are at breaking point.

“I am a nurse in the Regional Hospital. I work 12-hour shifts, I come home and I can’t have a shower,” declared Jennifer Callaghan. At the height of the heatwave, she said: “We haven’t had water in 48 hours.”

The on-off supply leaves households rushing to catch up with washing clothes and dish-washing, Patrick Downes, a father of two explained.

“I have had to repair taps because the pressure comes back too strong,” he said. There is also a recurring problem with equipment such as dishwashers and washing machines, stopping in mid-cycle or breaking down. “If they scheduled the water, say between 10 and 6pm, we could work with it.”

“It is frustrating,” Patrick’s wife, Stephanie added, explaining that they had recently spent the day at the bog, coming home dirty and sweaty but unable take showers. “I nearly cried when there was no water” she said. “It is the same when kids go training and come home and can’t even have a shower.”

Very often, Stephanie added, the water is brown and undrinkable. “You are talking about human rights here,” she declared.

Most householders told the Limerick Leader they have to buy bottled water.

And all this has been happening during a pandemic in which people are being asked to wash their hands regularly.

“I am all day drawing water for my animals,” said Joe Heffernan who is a farmer. Fortunately for him, he can get water from his cousin’s well. But it all adds to the day’s work. Another farmer was not so lucky.

“It is very frustrating. You can’t make Irish Water come out and sort it, and people expect us to be able to do that,” local Fine Gael councillor Tom Ruddle said. He also expressed disappointment that householders cannot get a grant to sink their own well in a bid to resolve the matter.

Fianna Fáil’s Michael Collins was told by Irish Water that the “matter is under review”. However, he said. “This is going on for years. Repeated requests go in but we just get the standard answer.” As councillors, he explained, they are dealing with a “faceless organisation”. “Nobody will come to a district meeting,” he continued. “I was told by a council engineer that investment was needed in infrastructure. Old Mill is in a queue but how long is the queue?”

Minister of State, Patrick O’Donovan said the long-running problem could be solved by installing a bigger pump. He has now gotten a commitment from the chief executive of Irish Water, Eamon Gallen to look into the matter himself. No surveys, no analyses are needed, Minister O’Donovan declared, just give them a bigger pump.

The people of Old Mill had paid the council for a water service through development levies he said, and he argued the pump could be paid out of the council’s development fund tomorrow.