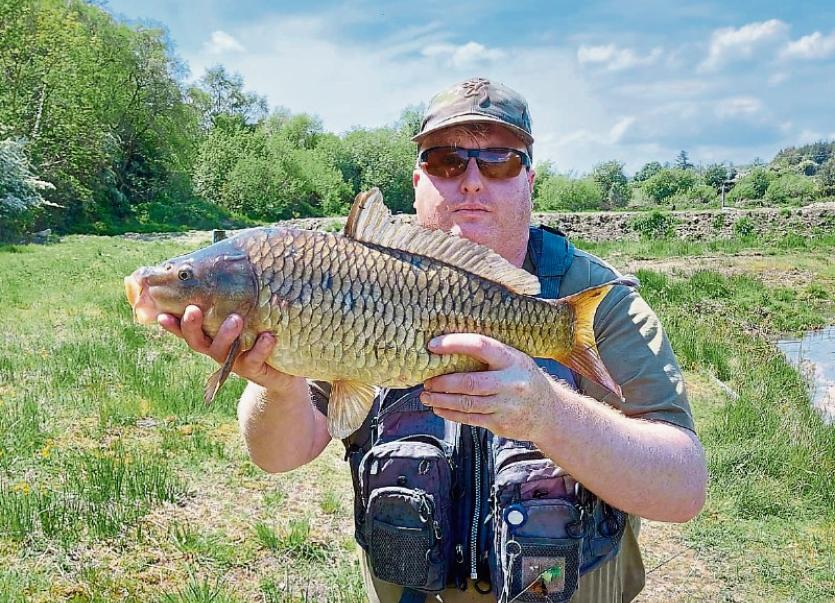 AS fishy stories go, Clive Gallagher from Askeaton tells a good one. He set out, he says, to catch a few trout but instead landed himself a whopping 10lb carp after an heroic battle between man, rod and fish.

Originally from Ballysteen where he learnt his fishing from his dad, Clive was visiting the Laois Angling Centre last week when he caught the big one.

“I was up there fishing for trout,” he explains. “There were a couple of carp in one of the lakes and I decided to go over. I was stalking the fish for a good hour, hour and a half when eight appeared like ghosts out of nowhere. About eight of them came to the surface.”

Clive was using a six weight light fly rod and a home-made fly, made from deer hair and tied by Michael Quinlivan, a fishing instructor from Limerick.

“I gently presented the fly and one of them took the fly. There was a serious battle for about 40 minutes, but I landed it in the end.”

There are a number of different species of carp, Clive explains but his was a common carp. After being photographed with the whopper, he released it back into the lake, “to fight another day.”

To add to his sense of achievement, the man managing the centre told him he had never heard of a fly-rod being used to catch a carp before. “To catch one on a fly rod is very unusual.”

On the day, Clive bagged a few trout as well but mostly, he says, he is in favour of catch and release and conservation.

But the carp is not his only unusual catch. Some weeks back, near Tarbert, he caught a Thornback Ray.

Clive is a member of Bleach Lough Fishing Club and also the Deel Anglers.