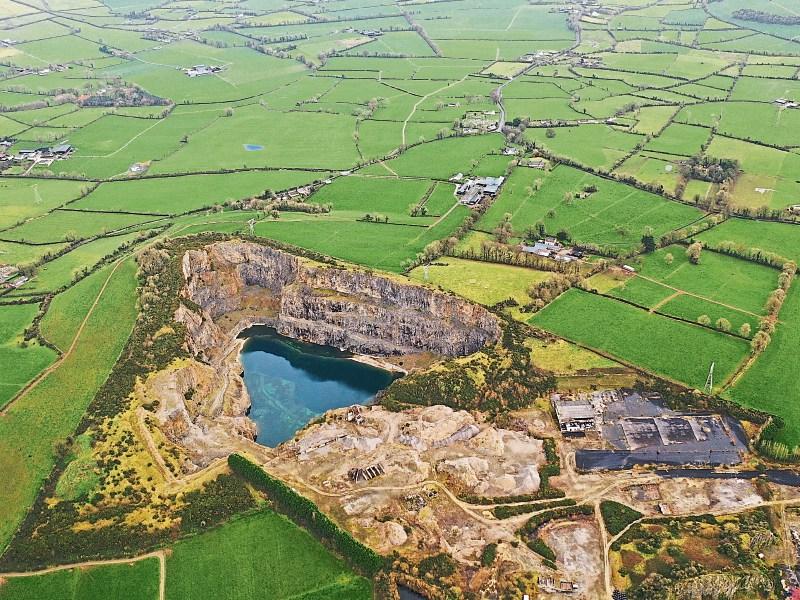 An aerial photo of Ballyneety quarry courtesy of Limerick Against Pollution

LIMERICK Against Pollution has raised concerns over what might be lurking at the bottom of the lake in Ballyneety quarry.

They suggest “dumped asbestos” or “maybe a burial place for missing persons”. The environmental conservation organisation has also expressed fears “about pollution of the food chain and contamination of the water supply”.

Claire Keating, on behalf of Limerick Against Pollution (LAP), has made a formal complaint to Limerick City and County Council. It follows an investigation in the Irish Examiner last month by Michael Clifford.

The subject line of LAP’s email of complaint is “Alleged case of abandoned quarry that, officially, is not abandoned”. This is because a condition of planning permission at the Roadstone- owned quarry was that the area be restored once operations cease.

However, Roadstone told the Irish Examiner in a statement: “While production activity at Ballyneety was suspended in 2010 following a decline in construction activity, it remains a long-term source of essential materials for future construction and infrastructure projects.”

A spokesperson for Limerick City and County Council told the Leader it has not been informed that the quarry is worked out and “therefore we have not followed up with remediation”.

“The responsibility to restore and landscape the quarry lays with the company who operated the quarry,” said the council spokesperson.

In its formal complaint to the council, LAP writes: “Please direct, as a matter of urgency, that there be a comprehensive environmental risk assessment carried out on this site.

“This place is reeking with asbestos contamination of one kind or another, which appears to have made its way into the surrounding ground water, thereby contaminating the in-situ pool, local water supply and the natural food chain.

“The wrecked asbestos cladded building, which continues to be vandalised resulting in the destabilisation of the asbestos which in due course gives rise to the serious danger of fugitive dust particles containing asbestos.”

The group also raises the “issue of buried asbestos in the Irish Cement Limited site in Castlemungret quarry and how it was supposed to have been dealt with by the EPA gave rise to serious debate and unresolved concerns in an oral hearing conducted by the EPA last December”.

“We respectfully suggest that similar apprehension should not be allowed to fester in respect of the abandoned quarry in Ballyneety,” it says.

LAP also sent their complaint to the EPA. In reply they said: “Limerick City and County Council is responsible for dealing with the issues described in your correspondence.”

LAP concludes by saying they feel that the Garda Sub-Aqua Unit be requested to inspect and examine the lake with a view to “excluding the possible whereabouts of persons reported as missing by their family and friends”.

“This would take account of possible death by self-harm, accidental death or death by violent means. It has been suggested that the site could have been used as a type of practice range in the use of firearms, that of course would be a matter a matter for consideration by the gardai,” the formal complaint by LAP concludes.