Spotlight: Knockaderry to the ‘King of the hill’ - Kieran Beville 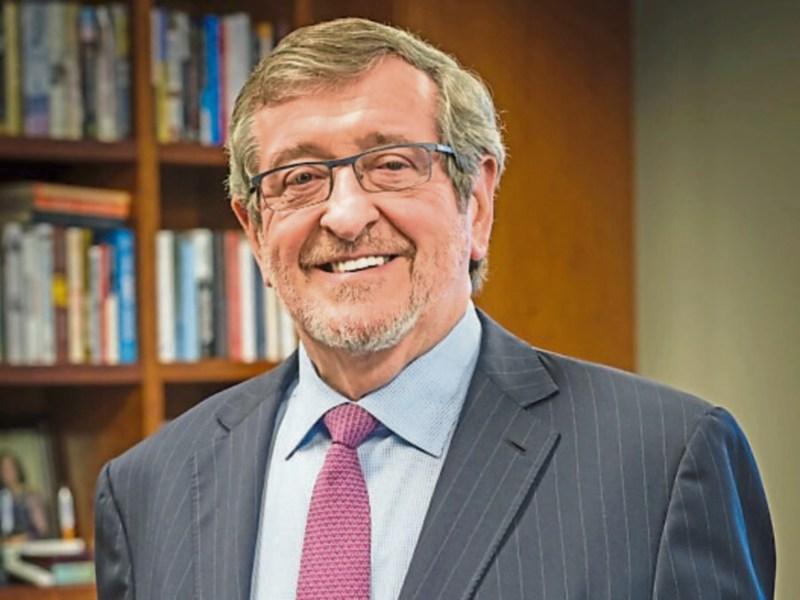 Many famous people have come from Limerick – people in arts, entertainment, media, business, science, politics, sport etc. This week I want to focus the spotlight on a man in the world of healthcare, which seems particularly appropriate in the current pandemic.

Michael J. Dowling hails from Limerick and yet he is virtually unknown by the people of this city and county. He has been overlooked by the media in Ireland and is better known in the USA. Time to put that right, I think!

Recently his memoir, After the Roof Caved In : An Immigrant's Journey from Ireland to America, was published by Arcade Publishing (Bayswater, VIC, Australia, January 2021).

It is the moving story of an Irish immigrant’s life, from a poverty-stricken childhood in Ireland to becoming a captain of industry. It is a powerful, poignant look at how hard work and education enabled one young man to change his life and circumstances.

Today, Michael J. Dowling is president and CEO of Northwell Health, New York State’s largest healthcare provider and private employer, with a workforce of over 74,000. He leads a clinical, academic and research enterprise with annual revenue of $13.5 billion. Northwell cares for more than two million people annually through a vast network of nearly 800 outpatient facilities, including 220 primary care practices, 52 urgent care centres, home care, rehabilitation and end-of-life programmes, and 23 hospitals.

Dowling grew up in poverty in the village of Knockaderry, Limerick in a small house without running water or a stable roof, in a family with little hope for improvement and a place with little opportunity and he overcame it all to become incredibly successful.

After the Roof Caved In is Dowling’s rags-to-riches story of his life and journey from his destitute youth to his realisation of the power of education and his eventual departure from his home to attend university in Cork, and onward through his life as he gradually improved himself and his circumstances.

Full of memories both fond and painful, this powerful memoir examines the family dynamics of his childhood – including the lives of his deaf mother and arthritic father as well as the social systems of the time, the politics and concerns of the day, and the way a variety of disparate events came together to help Dowling change his life completely. Most importantly, it chronicles his lifelong effort to rise above the circumstances into which he was born and to create the sort of life he dreamed possible.

For anyone interested in the stories of immigrants, the experiences of the Irish in the mid-20th century, or the value of hard work and education in changing one’s life, After the Roof Caved In is an essential read, and a heartfelt, deeply moving meditation on an extraordinary life.

He played hurling with Limerick and won a National League medal and a Fitzgibbon Cup medal with UCC and admits to lifelong love of the game.

Prior to his public service career, Dowling was a professor of social policy and assistant dean at the Fordham University Graduate School of Social Services and director of the Fordham campus in Westchester County. Afterwards, Dowling served in New York State government for 12 years, including seven years as state director of Health, Education and Human Services and deputy secretary to former governor Mario Cuomo. He was also commissioner of the New York State Department of Social Services.

Dowling was selected as the Grand Marshal of the 2017 St. Patrick’s Day Parade in New York and inducted into the Irish America Hall of Fame. He has been bestowed with many awards over the years.

For twelve consecutive years, Modern Healthcare has ranked Dowling on its annual list of the ‘100 Most Powerful People in Healthcare.’ He was listed No. 1 on Long Island Press, 2015 ‘Power List’ recognising the fifty most influential Long Islanders. He was also ranked No. 44 among large company CEOs in the USA and was the country’s top-ranking health care/hospital CEO on Glassdoor’s ‘Top CEOs in 2019’ list.

Leading Through a Pandemic

Michael Dowling’s book, Leading through a Pandemic – The Inside Story of Humanity, Innovation, and Lessons Learned During the Covid-19 Crisis (Skyhorse Publishing, Illustrated edition, August 2020) is about the journey behind the frontlines of Covid-19 care at Northwell Health and in New York.

What was it like at the epicentre, inside the health system that cared for more Covid-19 patients than any other in the United States? This book takes readers inside New York’s largest health system.

Leading Through a Pandemic offers guidance on how hospitals and health systems can prepare more effectively for the next viral threat. The book includes dramatic stories from the front lines at the peak of the viral assault and lessons of what went well, and what did not. The authors draw upon the Northwell experience to prescribe changes in the American health care system for next time.

Beyond the obvious need for increased stockpiles of supplies and equipment is the far more challenging task of fundamentally changing the culture of American health care to embrace a more robust emergency response capability in hospitals and systems of all sizes across the nation.

The book is a must read for health care professionals, policy-makers, journalists, and readers whose curiosity demands a deeper dive into the surreal realm of the coronavirus pandemic.

What is admirable about Michael is the way he readily acknowledges that there was an element of luck in the ascent of his career.

He values education and hard work immensely but he is not the kind of self-made-man who espouses a capitalist philosophy that hard work inexorably leads to success.

What endears him to readers is the fact that he has not forgotten his roots and his positive outlook on life. He could have become a bitter victim of adverse circumstances but he looked beyond the horizon and imagined a better life.

Dowling’s difficult early life has made him empathetic to the poor and to immigrants and he is a shining example of the kind of citizen who should be revered, not only in the USA but also in his native country and county.