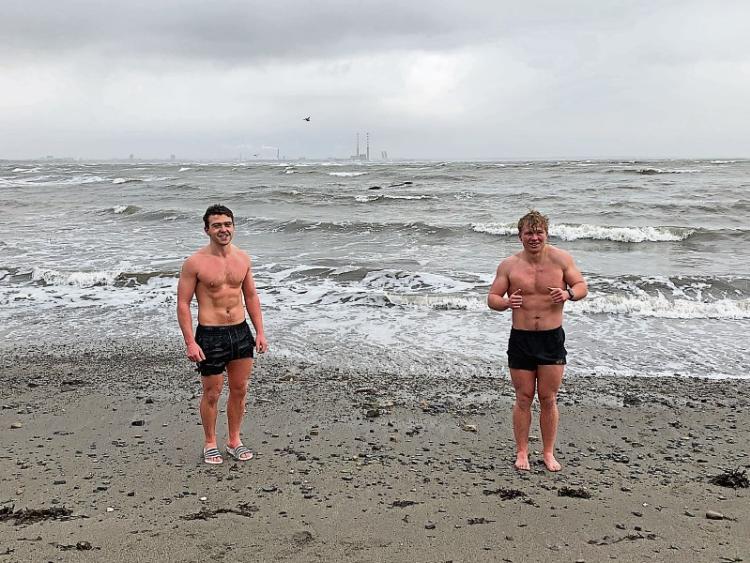 EVERYBODY is looking forward to February being over but especially two chilled-out Limerick lads.

Mike explains that from February 1 to February 28 they have to get into the sea every day, adding a minute each day. Therefore, day one equals one minute, day two is two minutes, all the way to day 28, which will be a whopping 28 minutes.

Mike said Freezbrury is more popular in Galway and Dublin where they are both students in UCD.

“We had two other friends up here who were doing it for Crumlin. I was kind of pushing it, trying to get Jack involved. We went out for a few dips and I convinced him,” said Mike.

The former Castletroy College and Crescent Comprehensive students have taken to it like ducks to water.

“We are both final year students and it’s probably going to be a long old month. We needed some sort of challenge to get us through the month and then we thought we'd do something for charity.

“Being a Castletroy man, I thought it would be nice to do something for a charity back in Limerick, and obviously thought of Milford. It was the first one that came to mind,” said Mike, who is studying Commerce while Jack is doing Landscape Architecture.

The rules of Freezbrury are no hats, gloves, booties, trainers etc. You must be submerged to your upper chest for the duration and must submerge your head fully at least once.

“The beauty of it is you build it up. You can definitely feel it each day, that shock is kind of gone,” said Mike, aged 21, while Jack is 22-years-old. A dip in the Irish Sea is definitely better than caffeine to wake you up.

“We prefer going in the morning before college – at about 7am or 7.30am. It’s a bit of an emotional rollercoaster – when you wake up you’re thinking, ‘I’m not looking forward to this at all’. And then you stop thinking about it and get in.

“When you get out you think, ‘That was unreal’. So far we have been very lucky with the weather, it's been pretty mild. I'd say we are still very much in the honeymoon phase of it so far.” That honeymoon period ended this week with the bitterly cold weather but it won’t stop Mike and Jack freezing for Milford.

To support them log on to their GoFundMe page by clicking here.

“​We would greatly appreciate any donation, big or small, with all funds raised going to Milford Hospice. Most in Limerick would know someone, whether that be a family member or friend, who was taken in by Milford no matter the situation, and provided with the highest quality of care, respect and positivity throughout,” say Mike and Jack.