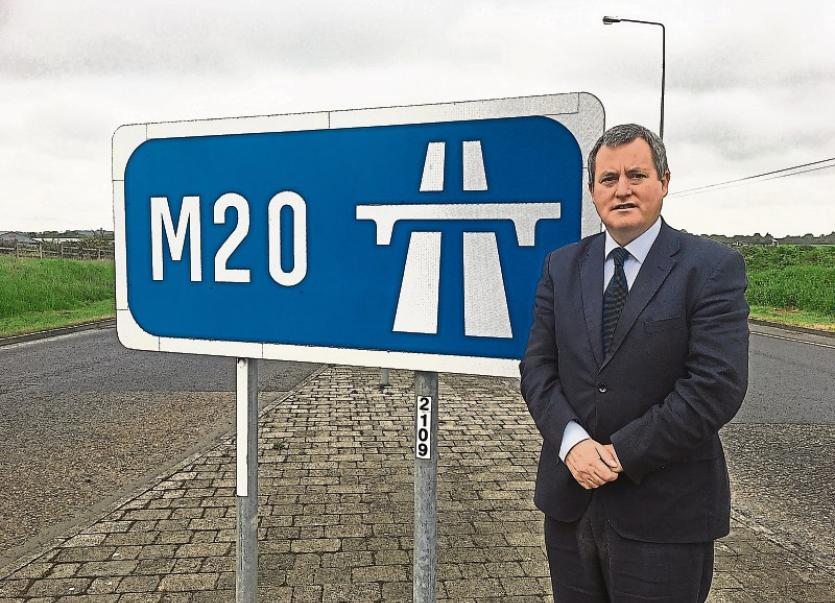 DEADLINE for submissions on the M20 Limerick to Cork Motorway and rail routes ended last Friday, however, a Limerick TD is calling for further public consultation.

Deputy Kieran O’Donnell was highly critical of “seriously incomplete and deficient public process with routes being published prior to any proper modelling on travel times, safety and costs on options”.

The TD called for further public consultation after proper modelling has been carried out.

“I have campaigned strongly over the years for the M20 because I believe connecting Ireland’s second and third largest cities by motorway will bring vital synergies for both Limerick and Cork and, indeed, Ireland. However, a deficient and incomplete process should not be rushed – we must get this right,” said Deputy O’Donnell.

He is calling on the TII and M20 project design office to go back to the drawing board and engage in a “meaningful further public consultation after proper modelling has been carried out on route options”.

Having studied the proposed routes in depth, Deputy O’Donnell said he was shocked to find that the route options were put out to public consultation prior to any proper modelling on travel times, safety and costs being completed, causing serious confusion.

“Many of the eight road and three rail route options published make no sense whatsoever when measured on cost, travel and safety modelling criteria grounds. This makes the current phase of public consultation seriously incomplete and deficient and must be revisited by TII and the M20 project design office.

“Take for example where Irish Rail already propose improved travel times from Cork to Limerick, by installing a second rail track from Limerick Junction to Limerick city on existing land they own which will therefore not involve any private landowners. Furthermore, this rail upgrade would be complementary to road provision. The M20 project design office have confirmed to me the road and rail options are not mutually exclusive,” said Deputy O’Donnell.

He continued: “Yet, two other much more costly rail routes (Bruree to Killonan Junction and Charleville to Patrickswell) are also included which instead are going through private property and homes. Apart from the major concerns caused here for residents on these routes, neither of these routes I believe would stand up to modelling against the upgrade of the existing Limerick Junction to Limerick rail route,” said Deputy O’Donnell.

He said initially, the M20 Project Office had planned a one-month consultation period to December 18, but, following his direct engagement with officials the decision was reached to extend the public consultation to January 15 to ensure the public could engage properly.

“On Thursday, December 10, I held an online public Zoom meeting on the M20 routes with over 200 people in attendance, highlighting interest in this project, but, also the serious concerns of landowners, farmers, households and towns located along the proposed routes. Whilst the M20 is important with great benefits to the region, equally I am fully aware that many farmers, landowners, households and towns are greatly impacted by the proposed draft road and rail routes. Their genuine concerns must be addressed in any consultation process to arrive at the correct choices. A deficient and incomplete process should not be rushed – we must get this right,” concluded Deputy O’Donnell.