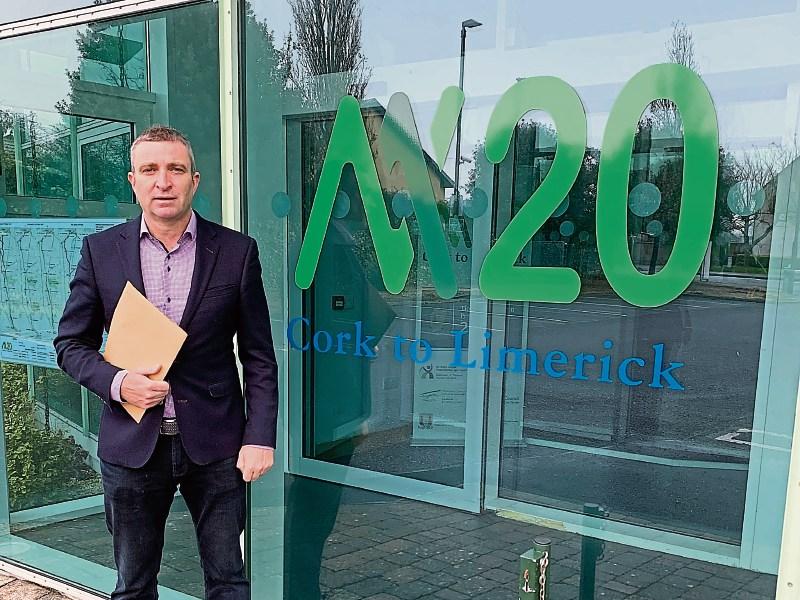 THE BEST route for the new M20 Limerick to Cork Motorway is to stick to the current N20, believes Minister Niall Collins.

He has formally objected to new routes cutting through County Limerick ahead of the deadline for submissions which is this Friday, January 15.

There are basically three options – upgrade the current N20; build a new motorway with a number of route options on the table or a mixture of both.

Minister Collins said he has had an unprecedented amount of communication from constituents living close to the county bounds near Charleville; Bruree; Croom;  as well as Crecora; Fedamore and Manister.

“People are very upset at the various options. The overwhelming desire from people is to have the existing route (N20) upgraded and not the route options dividing communities and destroying viable farms and businesses when the most obvious alternative is to keep the current route with the necessary improvements,” said Minister Collins, who does approve of the bypass of Charleville.

He reminds people that the closing date is this Friday, January 15 for submissions.

Submissions can be made using the online feedback form on corklimerick.ie or by email to info@corklimerick.ie, or by post addressed to N/M20 Project Office, Lissanalta House, Dooradoyle, Limerick V94 H5RR up until Friday, January 15.

All the road-based options start on the existing N20 at Blarney but there are three potential end points being considered at the Limerick end - the M20 Junction 5 (Attyflin), the M20 Junction 4 (Patrickswell) or the M20 Junction 3 (Raheen). There are road options either side of O’Rourke’s Cross in Bruree, which separately is due to be upgraded with a roundabout.

Last month, the worlds of dairy and stud farming joined together in Manister to object to the M20 Limerick to Cork Motorway cutting through their locality.

Peter Molony, Irish representative of Qatar Racing, owner of Rathmore Stud and manager of Spring Lodge in Manister, tweeted that top Limerick stud farms and archaeological sites would be “threatened”. His boss - Sheikh Fahad Al-Thani, who heads up Qatar Racing, has invested millions in Manister.

Dairy farmer Rose Keating says she “cannot sleep at night” due to the worry.

“There are proposed routes going through my parish of Manister and townland of Croom and surrounding areas. We have written to the council and made submissions to try and stop this as it would destroy our community.

“For the Keating family, this would result in the entire farm being destroyed along with our house as we could not live here anymore. The proposed routes are completely cutting my farm in half and go through the best of my land. This is not only emotionally but psychologically affecting me and my family. I cannot sleep at night,” said Rose.

She continued: “My dad, who passed away last year, put years of hard work into the farm and he would be turning in his grave. We have reseeded fields and put down all new fencing. This farm has been in our family for centuries.”

An online petition called “Manister and Crecora community members say no to M20 teal and plum route” was set up.

The deadline is also looming for the rail-based options being considered to improve connectivity between Cork and Limerick. Options include two new rail lines between Limerick and Charleville.

There is a sense of  déjà vu for those living and farming close to the proposed routes. The M20 Cork to Limerick Motorway Scheme was progressed through planning and design phases and the scheme was submitted to An Bord Pleanála in 2010 for statutory planning approval. An oral hearing was held in 2010, but prior to a determination being made by An Bord Pleanála, the project was withdrawn in 2011 due to the economic downturn.

Fast forward to 2021 and the scheme is currently in phase two (options selection) of seven phases.

The subsequent TII Project Management Guidelines phases for a scheme that is granted planning approval from An Bord Pleanála are phase five (enabling and procurement); phase six (construction and implementation) and phase seven (close out and review).