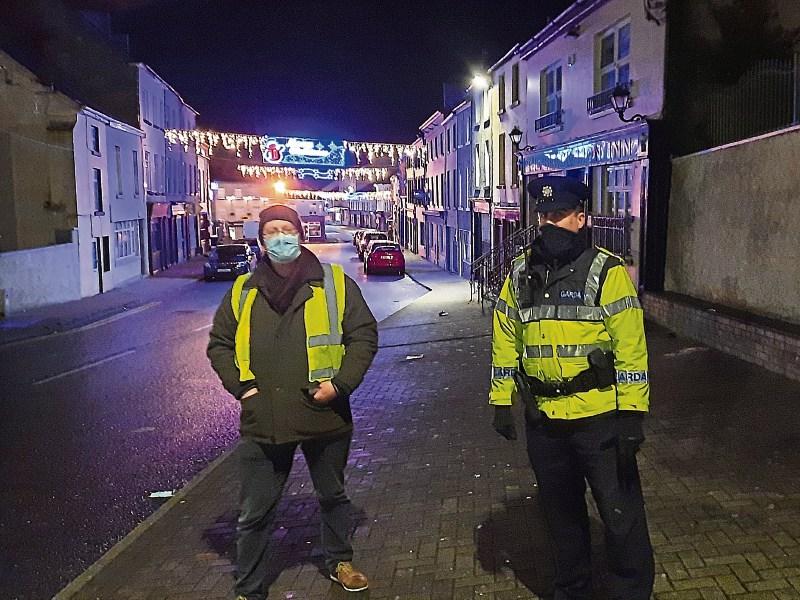 HOURS before 2021 was quietly ushered in, Rathkeale had come to a virtual standstill as the last of the local shops closed its doors.

“I’ve been trying to close for nearly an hour, I have half the lights off but people just keep coming in,” explained the proprietor as a small number of fireworks went off in the distance.

There were a handful of people on the streets – some dressed to the nines – but because of the latest restrictions, pubs and restaurants were closed meaning there was nowhere for large crowds to gather.

While there were a number of ‘house parties’ in the town over the Christmas period, there was no evidence of such gatherings on New Year’s Eve.

A leaflet drop was carried out earlier in the day reminding residents of the rules and penalties regarding house parties, family gatherings, travel restrictions and the wearing of face masks.

“It may have had an impact in terms of compliance,” said Inspector Andrew Lacey.

Investigations are continuing into the house parties over Christmas and files will be prepared for the DPP.

Gardai point out that the responsive ‘on scene’ enforcement powers such as those associated with public order offences are not available to them when it comes to breaches of the Covid guidelines.

One example includes a large house party on Chrismas Day which has sparked considerable comment online.

“S​ocial media can be useful to shine a light upon problems within society but it can also be a dangerous road to go down in terms of reactionary policing as it might give a snapshot of a particular point in time or it may be a complete misrepresentation,” said Insp Lacey.

Gardai, he explains, have a duty to fully investigate every alleged breach of the guidelines and to do their best to get it right.

“This means we must gather all the information, evidence and context available before deciding upon or referring an investigation file. Policing by its nature must be based on calls and information from the public, experiences of front line personnel and crime trends to lead out preventative measures.”

While there have been some serious incidents, including the discovery of a shebeen on New Year’s Day, the number of burglaries, assaults and public order incidents in recent weeks are down when compared to other years.

“Gardai have also worked very closely with the HSE and have continued to engage with relevant HSE staff throughout the ongoing operation. I would like to thank those members of the public who have adhered closely to the guidelines in respect of protecting themselves and their community, from the threat of Covid. Your compliance and support has been invaluable to the gardai who are working hard, in very difficult circumstances, on the ground, to ensure that the legislation that is available to us is being utilised,” she said.

On New Year’s Eve, additional gardai were assigned to carry out patrols while the 'public order' van from Roxboro Road garda station was also deployed.

Members of the Roads Policing Unit and the Regional Support Unit also drove through the town periodically ensuring there was a visible garda presence at all times.

During this reporter’s time ‘on the beat’, gardai encountered a number of small groups of people – both in the town centre and in housing estates.

“We are just having a chat, we are keeping apart,” one man told gardai as he wished them a happy new year.

In one estate, a group of around a dozen youths scattered in every direction when they saw gardai approach.

Insp Lacey points out this is a prevalent issue and is undoubtedly causing concerns and anxiety to local residents and business people in the town.

“We continue to work with local representative groups to try and improve the awareness and generate positivity for the area. Our response must be within the laws provided, proportionate and necessary to the situation and dealing with young children it can be challenging,” he said.

Each time we pass the Chinese restaurant, customers inside are reminded to wear their masks properly while a motorist – driving a UK-registered car – was stopped and told to get the front light fixed as soon as possible.

Given the almost doubling of the population of Rathkeale at this time of year, there is a need for extra gardai. However, it is one town in a garda district the size of County Roscommon.

“We have a responsibility to provide the best policing service possible with the resources we have for all of our towns, villages and hinterlands. This must be a priority and must be reactive to issues and crime levels elsewhere in the district,” said Insp Lacey.