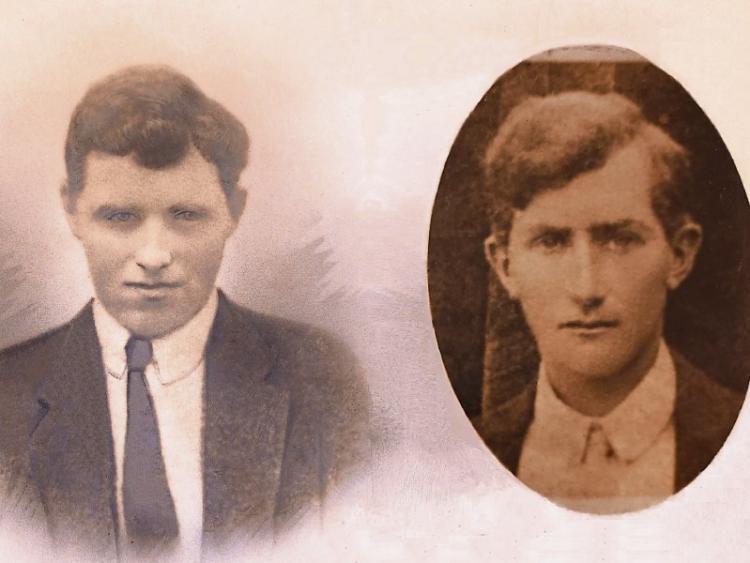 A non-political anniversary Mass was planned by the Tobin and Murphy families for this Friday in Glenbrohane church but it has had to be called off due to the new Covid guidelines.

David Tobin, a grand nephew of Mr Tobin residing in Austin, Texas, got in touch with the Leader with a researched and factual account of their deaths.

After spending the night at Mrs Barry's safe house in Cloghast, David, aged 23, and Thomas, 29, of the East Limerick Brigade, attended morning Mass at St Patrick's church Glenbrohane. They continued to Ballinalackin to pay a visit to David’s mother. Little did they know that the meal which was prepared for them would be their last.

According to David’s brother, Ned, the two young men were spotted by an informer at Mass that morning. Word was sent of the men's whereabouts to the RIC barracks most likely in Galbally. The Machine Gun Corp, led by Lieutenant Keller, was dispatched from Kilmallock.

This raiding party stopped the lorry some distance from Tobin's house and sent some marksmen ahead to outflank the boys from the high point at the rear, in the likelihood of an attempted escape towards the mountain. Once the marksmen were close to being in position Lieutenant Keller proceeded towards Tobin's Forge in Ballinalackin.

David and Tom heard the lorry of Tans and Military which was descending on their location from the direction of Maguire's to the south side of the house. According to the witness statement David’s brother, Ned Tobin:

“They left the house and went towards the hill at the back and took cover at a cross fence. In the first exchange of shots my brother David fell dead. Tom Murphy got away for about a distance of about a quarter mile, but the two soldiers who had outflanked him were now above him with others coming on behind firing as they came. The lorry itself with the rest of the party had proceeded along the road to Sheahan's Cross.

“At the north side of Sheahan's Cross, Tom must have realised that his chance of escape was gone, because he put his revolver into a furze bush where it was found a few days later by a Volunteer and subsequently given to me. In a final bid to escape he crossed the road and, as he did so, he was hit by a tracer bullet in the groin,” said Ned.

Tom died later that night. Volunteers from the Glenbrohane area found David’s body and tragically reunited the two men in Kilmallock. David Tobin’s grand nephew sent the Leader copies of their death certificates from the Military Court of Inquiry held on January 3, 1921 in Kilmallock. Cause of death in both cases was, “Shot or shots fired by a member of Crown Forces in execution of his duty”.

Ned said at the burial a big force of Tans were present.

“The Tans took up positions at the graveyard and tried to prevent the general public from going in, but the people were in a temper and broke through. After this the Tans tried to seize the flag, but Nellie Maguire snapped it out of the Tan's hands and got away with it. She had to pay for this some days later when they arrested her and gave her 81 a very rough time. The officers of Ballylanders Company later fired a volley over the grave,” said Ned.

Crosses were erected at the sites where David Tobin and Thomas Murphy were shot. Whilst remnants of these crosses exist, they have unfortunately not withstood the test of time.

The late Cllr Willie Sampson and the late John Tobin (Ned Tobin’s son) laid a wreath at the Republican plot in 2016 to mark the 100-year Easter rising celebration.

It is hoped in time to mark the 100th anniversary of the deaths of David Tobin and Thomas Murphy.