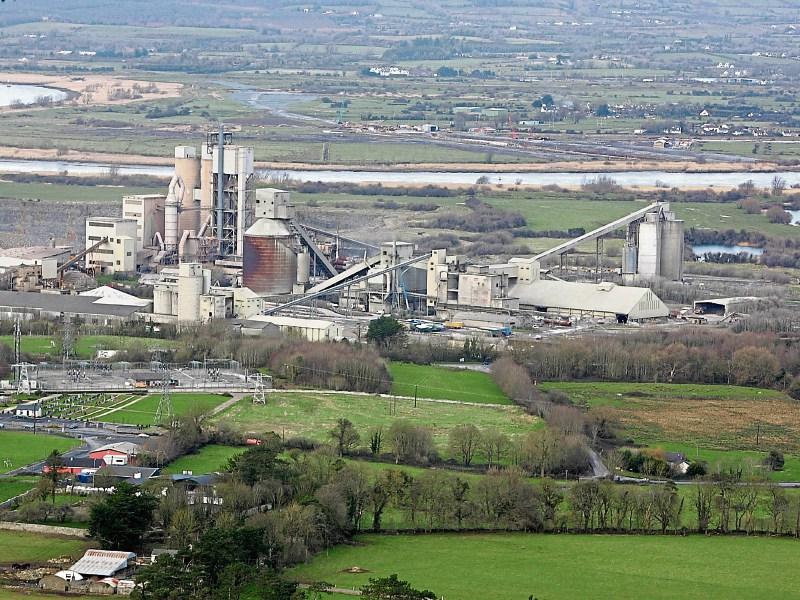 Irish Cement is seeking to switch away from fossil fuels at its plant in Mungret | PICTURE: LIAM BURKE/PRESS22

IRISH Cement landfilled over 3,000 tonnes of asbestos just metres away from a protected lake for over a decade, it has emerged.

On the fourth day of an Environmental Protection Agency (EPA) hearing into the firm’s proposals to switch away from fossil fuels in favour of alternative methods in Mungret, it emerged the toxic material was stored underground from between 2000 and 2002 up to 2013.

Irish Cement’s head of quality and sustainability Seamus Breen said it was based on an “informal agreement” with the EPA – and added that he was not aware of any “formal procedure” which would have allowed the public to be aware of its deposition or removal.

The substance was stored between 100m and 200m away from the Bunlicky Lake, part of which is a special area of conservation.

The admission came following questioning by barrister Micheal O’Donnell, who is representing JP McManus’s daughter Sue-Ann Foley and the Mungret Residents Association at the oral hearing, which is taking place online.

Having secured planning permission from An Bord Pleanala for the physical aspects of its proposals, Irish Cement now just need a licence from the EPA in order to move forward with its controversial proposals in Mungret.

Mr Breen said: “In the demolition of roof sheeting on site, cement material containing asbestos was put in lined pits in the area of Bunlicky.”

He confirmed three locations were used for the landfill of the hazardous material, adding that approximately 3,269 tonnes was stored.

Pushed by Mr O’Donnell, he described this as being an “informal agreement.”

When it came to removing the material, the Irish Cement executive said a plan would have been submitted to the EPA.

But asked if there was a public notice or planning permission sought, Mr Breen confirmed he was not aware of anything like this.

Barrister Mr O’Donnell asked: “Do you not find this behaviour extraordinary? Where one of the biggest companies in the world, certainly the biggest in Ireland, is involved in the first instance in he deposition of hazardous waste, in the middle of a residential built-up area without any application for planning permission or any public process? How do you explain that? How do you explain the removal of this material without any supervision in the sense of the public procedures required?”

He also raised concern about the contamination of the Bunlicky Lake, part of which is a European-protected natural heritage area, from other aspects of the Irish Cement operation.

When Mr Breen pointed out not all of Bunlicky is protected, Mr O’Donnell said: “Here we have the Merchant of Venice analogy. It is a single waterbody, isn’t that right? Water movement is not confined in part to a European site. It can flow between the two. It’s not just possible, but likely these contaminants will make their way onto the European site as it’s a single body of water.”

Elsewhere at the hearing, Mr Breen also said if Irish Cement get permission for its reforms in Mungret, some of the new materials will arrive on site covered only by a tarpaulin.

These could include alternative raw materials like red mud. Tyres will not be delivered in a sealed container, he added.

But in the case of other substances such as meat and bonemeal, and animal manure, these will arrive sealed.

Local resident Ciaran Kane, the first speaker of the day, expressed concern over the use of tyres in the kiln.

“If they’re going to burn thousands of tonnes of tyres, there will be thousands of tonnes of pollutants released by this process. If I burnt a tyre in my back garden, I think the local county council would be onto me to tell me not to do it as it’s bad for the environment. But we have this big leaky bucket down the road, only about 2.5km from me, and we will be putting thousands of tyres into it,” he told the hearing.

He said Irish Cement’s plan is “easy, quick and dirty”.

But Dr Martin Hogan, a consultant in occupational and environmental health, said: “The evidence is there that such a change does not harm human health. That’s not just me saying this, independent bodies such as the UK Environmental Agency and the UK Committee for Medical Effects have said the same thing. It’s been reiterated by Public Health England.”

In response, Dr Roisin Cahalan, a lecturer in respiratory and cardiovascular physiotherapy, and a Dooradoyle resident, pointed to various pieces of peer reviewed research in the area of waste and health incinerators.

She said: “Older incinerator technology and infrequent maintenance schedules have been strongly linked with adverse health effects. If we go ahead with this incinerator, there not a hope in hell we can become a climate ambassador city, and the potential of all we have been striving for, will be utterly destroyed.”

“It’s a cement factory. We have no plans to turn it into an incinerator. We continue making cement. One of the key points is we are already combusting fossil fuel onto the site to make cement. What we are doing is we want to change the fuel type,” he said.

He also told the hearing that a recent study of Irish Cement’s activities, brings a €30m benefit to the region, based on haulage work, support industries, as well as the direct and indirect employment.”

He made the point at Irish Cement moved its sister plant from Drogheda, Co Louth, to Platin, Co Meath in the 1970s.

Mr Gilmore said: "Platin is in a more rural location. But the Limerick factory was rural when it was there originally. Limerick city has moved along the banks of the Shannon towards the factory. In terms of Platin’s move, that was predicated from a source of limestone. The cement factory in Limerick is right beside a very good source of high quality limestone.”

Derek O’Dwyer, a member of the Limerick Against Pollution group which has opposed Irish Cement’s plans from day one, expressed concern over the “quality and veracity” of the air quality data submitted by the firm’s consultants Arup.

He criticised the fact only averages were recorded, and said were the data collated differently, it could have raised more questions at the Irish Cement operation.

“I’m talking about the reality here – significant exceedances for significant periods of times. In one instance, it was 22 times the WHO guideline. If my kid is playing in the adjacent school less than 1km from the mouth of the kiln, and we’ve exceeded the WHO average by 22 times, do you believe that is a tolerable risk? It might be your kid, it might be mine,” he said.

Sinead Whyte, Arup, said: “The WHO air quality guideline is based on an annual average. It’s not appropriate to compare hourly levels with an annual limit. When Mr O’Dwyer makes that comparison, it is not a correct one.”

Also addressing today’s session of the oral hearing, metropolitan district leader Cllr Sarah Kiely told the EPA chairman Patrick Byrne: “The fears of the people are on your shoulders, the ecology and biodiversity rely on you. The children and the people of Limerick are watching you, as are we the councillors. It is incumbent on the EPA to make things clear for the general public. People feel lost and do not in the main understand what is proposed.”

Environmental consultant Imelda Shanahan said Irish Cement’s proposals are “disproportionate, inconsiderate and unjustifiable” and that “it is not safe for this licence to be granted.”

She also gave a breakdown of three alternative fuels that Irish Cement could use if its reforms are passed – red mud, end-of-life tyres and fly ash.

“It is very clear the composition of the wastes is carried and the type and amount of pollutants that can be released into the atmosphere varies depending on the waste type,” she said.

Ms Shanahan also highlighted an “astonishing situation” in the Irish Cement testimony, where two of its representatives appeared to disagree on a procedural element.

She said that Dr Don Menzies justified the selection of municipal solid waste profile data while the aforementioned Dr Hogan rejected any relevance of this in his assessment of the human health impacts of human health.

The oral hearing enters its final day tomorrow morning from 10am, when Mr O’Donnell will ask more questions over the company, while there will be closing statements from objectors.