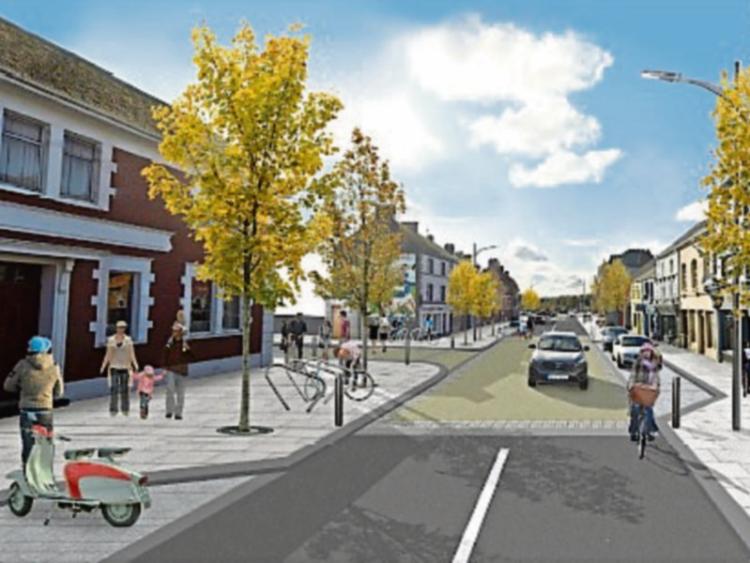 An impression of how Main Street, Abbeyfeale will look after the project is complete

OVER €8m is to be spent on transforming traffic management in Abbeyfeale.

There are few of us who haven’t been held up going through the town over the years.

However, the new scheme will allow improved traffic flow through Abbeyfeale; improve pedestrian safety for residents and shoppers; feature an enhanced public realm and increase the sense of place and community.

Kieran O’Gorman, senior executive engineer at Limerick City and County Council, outlined this to councillors at a meeting of the Newcastle West Municipal District. In a lengthy and detailed presentation, Mr O’Gorman even brought in examples of the type of bricks to be used in the kerbing and footpaths.

Mr O’Gorman highlighted a number of reasons for traffic delays in Abbeyfeale. The bus bay outside the church isn’t big enough for the bus to pull completely in off the road, he said. Hence, traffic is often backed up behind it as passengers get on and off.

Also, he said parking bays are quite narrow which means increased time for motorists getting in and out of them.

Mr O’Gorman revealed that between 2014 and 2019 there had been 144 traffic accidents in Abbeyfeale – 131 material damage only; 12 non-serious injury and one serious injury. The most common type was side swipes (44); parked vehicles (41); and rear ends (27). Many relate to how narrow the carriageway is, he said.

In the new plan, Mr O’Gorman said the existing bus bay would be widened at the church through land acquisition.

“The bay will be off the road. The local priest is agreeable but has to go through the proper channels. The top church gate will be relocated,” said Mr O’Gorman.

He added that the carriageway width will be increased to 6.7 metres and 2.4 metre wide parking bays.

“However, despite removing on street parking (47 spaces to 24) the scheme has increased parking spaces overall from the existing total of 225 to 240,” said Mr O’Gorman.

The new spaces are mainly at the rear of McMahon’s butchers; medical hall; O’Riordan’s bar and the rear of Leen’s to O’Riordan’s. Mr O’Gorman stressed that they were very cognisant of traders’ concerns regarding parking. The town centre will actually see a rise of 30 spaces from 47 to 77.

Mayor Michael Collins asked if the traders are happy?

“I won’t say we have 100% but we have worked through quite a bit. There are 30 extra for the town centre,” said Mr O’Gorman.

To help keep traffic flowing, Mr O’Gorman said there will be a computerised traffic light system that will react to traffic.

“It is getting away from a fixed time system. If no vehicle is waiting to come onto the main road it will go back to the main road (to keep traffic moving),” said Mr O’Gorman.

Cllr Liam Galvin asked what is going to happen on an August Bank Holiday weekend?

Mr O’Gorman said the traffic management scheme will improve the flow but won’t solve the situation.

Cathaoirleach Francis Foley said that they want a scheme for the town that works for everybody, “people in the town and people visiting the town to do their shopping”.

“A lot of work has gone into this. It looks very good. Discussions with the working group will be crucial,” said Mr Foley, who asked how long will the work take.

Cllr Liam Galvin asked about the costings and the timeline for the works.

“Off-street work will be done first and then plan a programme for the on-street works and a traffic management plan,” said Mr O’Gorman. The next steps are complete legal agreements; meeting with the working group; ground investigations; detailed design for underground works; funding Rural Regeneration and Development Fund application and Transport Infrastructure Ireland. Cllr Foley said the “sooner it gets going the better”.