Limerick TD sees the funny side of schoolgirl's Halloween costume 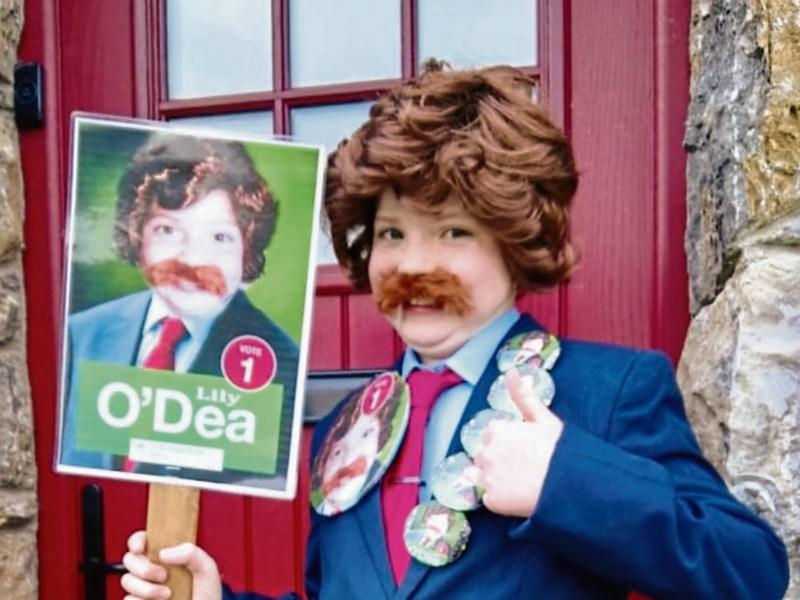 Lily O'Dea (aka Lily Hurley) of the Anti-Homework Party

CROOM schoolgirl Lily Hurley was the toast of her classmates, as she dressed up as well known Limerick TD Willie O'Dea.
The ten-year-old Croom National School student became Lily O'Dea for the day - and it even grabbed the attention of the former Defence Minister himself as he shared the picture of the costume on social media, saying he was " seriously impressed".
Lily's mum Liz Hurley said she and her daughter had been thinking of the get-up since last Christmas.
"It was just something we thought of, and we've been working on it together the two of us all year. The costume didn't take that long.  Two weeks before Halloween, I'd say we started working on it properly. We did the design on an app on my phone, and the costume itself was just a trip into town (before Level 5)," she told the Limerick Leader.
"Lily was thinking of different ideas. She wanted the tie with the tie-clip on it. The moustache and hair was an online Halloween shop. It was very simple actually. It didn't take long to put together," she added.
She also revealed the veteran TD had actually rang the school to see if it was okay to share Lily's picture on social media.
"The school had rang me and told me Willie had seen the costume. He'd have loved to have come in, but sadly the Covid-19 meant it wasn't possible. But he asked for permission to tweet the photo. Obviously I was delighted, particularly for Lily, with the buzz she got off it," Liz added.
Lily, who is in fourth class, said her friends were very impressed with her costume - once they realised who it was!
"First of all, they just saw me dressed up as an old man. Then they worked out I was Willie O'Dea, so they found it funny," she smiled, "They were very impressed."
Although Willie may have been impressed with the costume, we're not sure he is ready to defect from Fianna Fail to the Anti-Homework Party for the time being though!