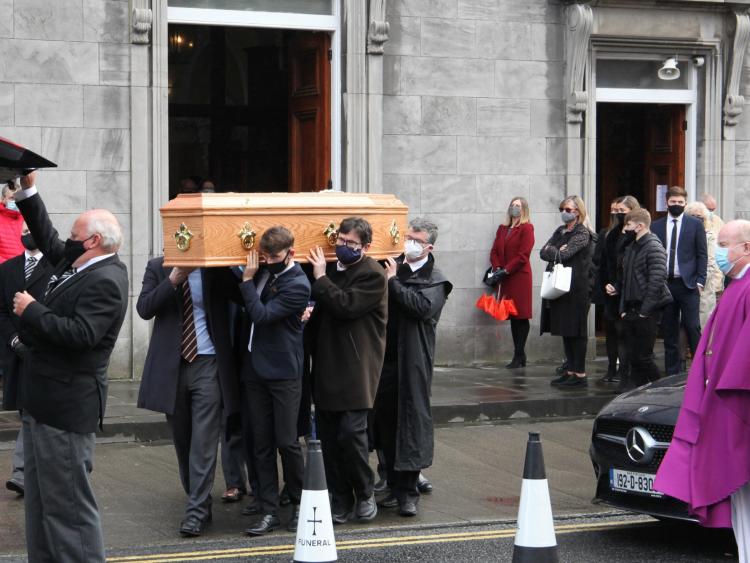 'I COULDN'T have asked for a better dad in the entire world."

Many tributes have been paid to former TD, MEP and minister Tom O'Donnell but the most powerful came from his young son, Thomas.

Speaking at the end of his dad's funeral Mass in St Joseph’s Church, O’Connell Avenue, this Monday afternoon, Thomas gave a beautiful eulogy. His father died peacefully at his residence in Ballysheedy West on Thursday. He was 94.

The symbols brought to the altar reflected Mr O'Donnell's life - Copy of Dail debates where he served for 28 years; the Schuman Medal which was presented to him by the Christian Democrat Group; a special address in recognition of his work as Minister for the Gaeltacht; scrolls of honour from both Limerick City Council and Limerick County Council in recognition of his services to the city and county; a copy of the annual report of the Irish Peace Institute.

In his homily, Canon O'Malley spoke of the fact that Tom's brother, Dr Martin, died just three days before Tom went to his God.

"Both died after long lives in service to other people. Martin as a medical practitioner in Charleville and Tom as a parliamentarian and community developer - always involving those on the perimeters and the most marginalised peoples," said Canon O'Malley.

He said Tom O'Donnell made no enemies.

"He loved god, he loved his wife Helen, he loved his son Thomas of whom he was immensely proud, his family members, friends and the wider public who he served with distinction," said Canon O'Malley.

At the end of the Mass, Thomas O'Donnell spoke movingly of his father.

On behalf of himself, and his mother, he thanked everybody in attendance, those who have sent lovely messages and those who were taking part in the livestream who were "definitely here in spirit".

"I was lucky to have a fantastic dad that not only played an enormous part in me and my mum’s life but also played a huge part in so many other people's lives for which they are eternally grateful," said Thomas, who became aware his dad was a little different to other people’s parents when he made his first trip to the Crescent Shopping Centre with one of his friend's parents.

"I was shocked when we parked the car, walked in the entrance and walked straight to the shop. I couldn't really understand why they weren't stopping every couple of feet to speak to a different person - each would have a handshake and a smile.

"As I got older these lovely people would turn a 30 minute trip into an hour, taking great pleasure in telling me how my dad had helped them or their family in one way or another," said Thomas.

He said the happiest day of his dad’s life took place 36 years ago when he married Helen in Rome.

"I couldn't have asked for a better dad in the entire world and I am thankful for everything that you taught me and every single day we spent together," said Thomas.

Tom, a fine orator, would have been proud.