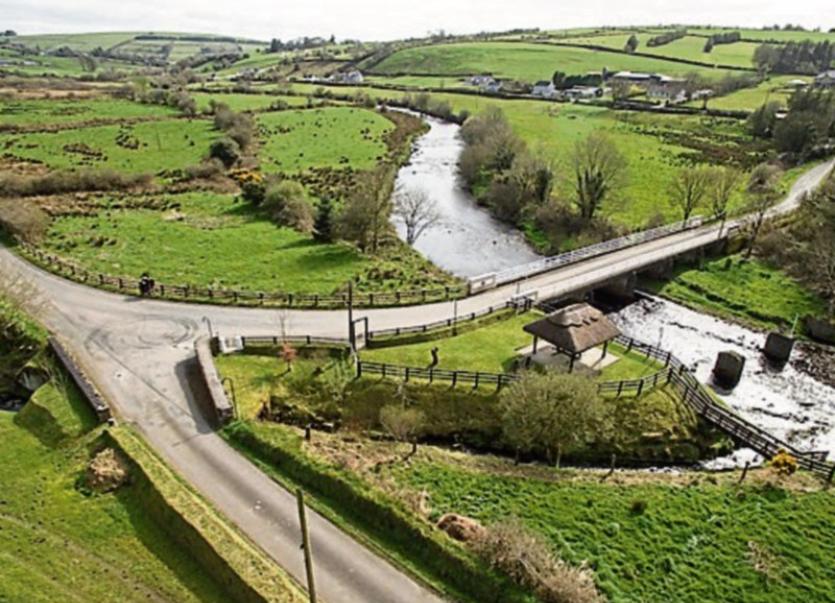 Striolán Bridge was built in 1958. Work commenced on January 1958 on the Limerick side, near Mountcollins.

A bulldozer was brought on site, the river was turned and ditched half ways in the river.

The foundations were dug out. There were no ready mix trucks at that time, only a big site mixer. Cork County Council were the main contractors. The land where the bridge is built was donated by Maurice Murphy of Meeng, Rockchapel, free of charge.

My father, the late Denis Curtin RIP, was the only person from County Limerick and the late Bernard Leahy RIP, of Ahane Cross was the only Kerry man employed there. Bernard was the night watchman. A Council caravan was on the site for the watchman. We used to call to Bernard every night playing cards. It was all manpower that time.

The ‘Ganger’ was from Newmarket, Co Cork, John Cremin was his name. He was an engineer in his ‘own rite’. The engineers used to ask him for information on what to do. He was a great man at his job and a great boss to work for.

When the floors were being put in at least forty to fifty men were employed for the day. All of the cement was mixed in a site mixer. My father put the date into the wall of the bridge and he also cement dashed the bridge. 1958 was a very bad year raining every day. If there was a flood in the river the foreman used to let my father and another man Tade Murphy go fishing for white trout. There were plenty of fish there that time, not like now.

The bridge was finished, and the new bridge was opened on the July 13 1958. The day it was opened, a dancing stage was erected at Jimmy Curtin’s gate and open air dancing took place there.

Kegs of Guinness were in Bernard Leahy’s store house, Aeney O’Connell played music for the dancers and the dancing went on for the whole night. The bridge was a great boost for the people of Meeng, Rockchapel and all of the people from the surrounding areas.

Before the bridge was built there was no access by road from Meeng, Rockchapel or Acres, Mountcollins to County Kerry. The only access to County Kerry was a horse ford across the river.

A road led to the river where the horse ford was through Maurice Murphy’s land, it was known as the “Short Road”. If there was a flood in the river the people from Meeng had to take the milk to Mountcollins creamery up Striolán hill. The only way across the river was a foot bridge and the ruins of that bridge are still there today.

On the day the bridge was opened a photograph was taken by Mary Casey, Meeng, Rockchapel. I

In more recent times my brother Bill and I turned the place into a beautiful scenic area.

We built a gazebo and thatched it. We cleared the site of scrub and rubbish which had been dumped there. All the work was carried out voluntarily and funded by ourselves.

We had crossroads dancing there again on the official opening day of the area on September 10 2000.

Norma Healy took photographs on the day and we got a photograph taken which was almost a copy of the original one taken in 1958 despite being over 42 years later.

Missing from the photo taken that day were Margaret Curtin (my mother) RIP, Chris Cahill RIP, and Breda Leahy RIP. In the newly taken photo Mary Casey who had taken the original photo in 1958 is standing the place of Breda Leahy.

A few years ago, we got a grant from IRD Duhallow to re thatch the gazebo and carry out other work in the area. A lot of couples come there on their wedding day to take photographs and videos. It is a unique location, with one foot you could stand in the “Three Counties” of Cork, Kerry, and Limerick.

In 2016, the two GAA Presidents paid a visit to the area with the launch of “Féile Peile na nÓg” taking place there on the 9th of May that year. In 2018 the “McCarthy Cup” was brought to the area by members of the Limerick team who were the reigning All Ireland Senior Hurling Champions at the time.

To this day, I maintain the area on a voluntary basis.