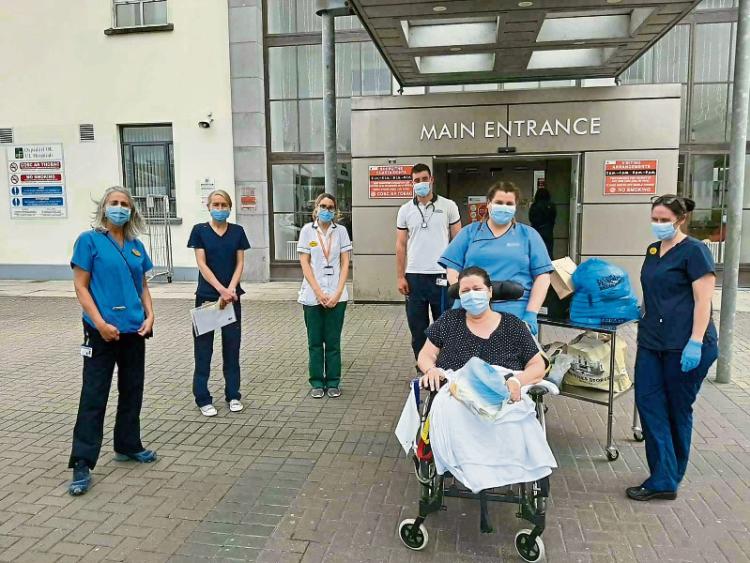 A NEWPORT woman who was left in a coma and given only a 20% chance of staying alive has survived against all the odds.

Caroline Salem, 62, has been left in a wheelchair after complications arose during a routine operation to blast a kidney stone at St John’s Hospital.

In what became “a matter of life and death”, the mother-of-five developed complications and was transferred to intensive care at University Hospital Limerick (UHL), where she was in a coma for three months.

Taking up the story, Caroline said: “During the procedure, I contracted sepsis. This quickly resulted in me ending up in intensive care in a matter of hours. This then escalated rapidly into a septic shock resulting in multi-organ failure. I was on life-support ventilation, dialysis, a high dosage of adrenaline to keep my heart pumping. But my liver started failing and I had to have most of my small bowel removed as it died due to not receiving blood flow.”

At one point, Caroline said medics were considering turning her life-support machine off, but her children all insisted that must not happen.

“They thought about turning the machines off on me because they didn’t know if my brain was still going,” she said, “But my kids said, no way, that’s our mother in the bed.”

Incredibly, she got through the ordeal, but lost the use of her legs due to the fact they had to be amputated above the knees and is confined to a wheelchair.

Now, her family and friends are rallying around her and trying to raise the money needed to adapt her home for her new way of life.

Speaking to the Limerick Leader, Caroline said: “It’s been a hard time. I went in for a routine stone blast and to wake up three months later without my legs, it’s very difficult.”

She’s been left feeling down as a result.

”Having to depend on my kids to look after me is the hardest part. Not being able to do anything, stuck in the chair. I cannot even get out of bed. Someone has to be here with me constantly. I have gone from being very active to nothing when you think about it.” she said.

”You are going from a parent back to being a child, where you have your kids looking after you. For me, that is not right,” she added.

Despite the traumatic time, Caroline is full of praise for staff at both St John’s Hospital and University Hospital Limerick.

“There’s a great crowd of nurses and staff out there. I couldn’t thank them enough for what they’ve done for me,” she said.

These nurses gathered at the hospital door to bid her farewell after her nine month stay in UHL – and at the other end of Caroline’s journey, she was afforded a warm welcome back to her home place.

Neighbours gathered outside her home in Newport with coffee, and cake, and welcome home cards.

“I didn’t think I was loved that much, that all my neighbours would welcome me home. I was just shocked and amazed they went to the trouble. I want to thank each and every one of them for doing what they’ve done for me,” Caroline said.

On top of this, there has been an incredibly generous response to Caroline’s online fundraising appeal to help her adapt her house for wheelchair use.

Already, almost €16,000 has been raised in the appeal, which was organised by Caroline’s second-eldest son Sameer.

“We couldn’t believe the generosity of people. We had €1,000 got in the first few hours after signing up. It’s just people you don’t even know who are out there and want to help. That amazed me, and my kids. That people are so generous,” she said.

Sameer added: “The level of support that came in through the page alone was overwhelming. It opened our eyes to the kindness of people, especially during a pandemic when people were losing their jobs. It struck a chord with us, it helped us see there was light at the end of the tunnel.”

He paid tribute to a number of people, including the nurses and doctors at UHL who went “above and beyond”, as well as the many friends, family and well-wishers who visited and texted his mother on the ward.

Caroline also thanked all her family for sitting with her five children in the hospital and being there for them.

In particular, she paid tribute to her sisters Teresa, Breda and Geraldine "who were there for us every single day".

Thanks was also given to Labour councillor Fiona Bonfield and party TD Alan Kelly who helped Caroline access the home adaptation grant.

Sameer thanked Denis Sheehy from DS Architecture for designing and managing the home home adaptation extension all free of charge, as well as Catherine McCarthy for cooking and delivering hot food and dinners.

Click here for more details and to make a donation.