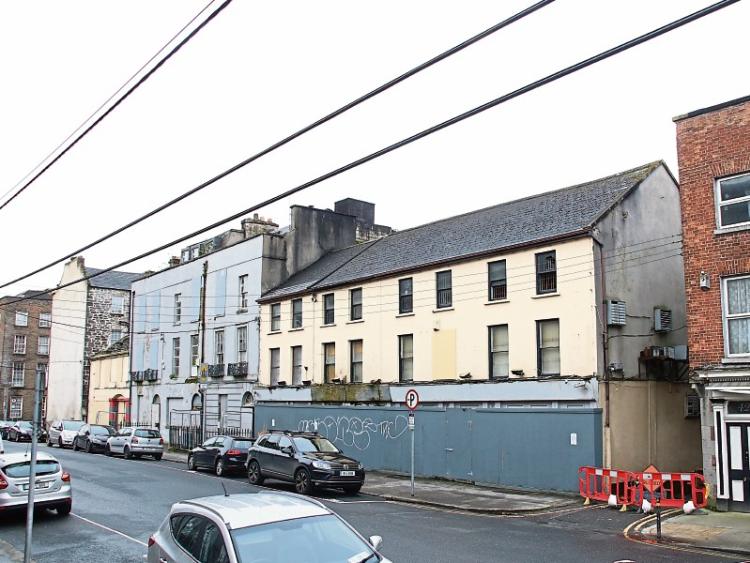 AN application for planning permission is to be made on a city centre site which has lain idle for more than 15 years.

Thanos Securities is to seek the go-ahead from council planners to develop a six-storey office and residential complex on a site in the Georgian quarter.

The huge portion of land, which stretches from Catherine Street to its junction with Mallow Street, was once the home The Desmond Arms bar and nightclub.

However, following its closure in the early 2000s, there has been no action on the site, with a €40m plan to create a retail and commercial facility never seeing the light of day due to recession.

Now, following the serving of a derelict sites notice on the site, its owners are to seek to develop there, in a move which has left neighbouring retailer Shane Gleeson “absolutely delighted.”

The proposals at 34 to 41 Catherine Street, which includes the former Limerick Leader printing press, will bring 24 new apartments over three storeys.

Numbers 35 and 37 Catherine Street, which are candidates for protected structure status will be refurbished, as will number 36 on the thoroughfare.

These will be converted to offices rising up three storeys over basement level, with the apartments then making up three more storeys, with a roof garden on the top floor.

Meanwhile, numbers 34 plus 38 to 41 will be demolished under the plans and replaced with a new car park, bike store, ESB substation and plant rooms.

Mr Gleeson has welcomed the new development, but said it must be kept in character with the Georgian heritage of the area.

”I hope the design fits the location. It’s in the middle of Georgian Limerick and I hope they keep the same theme. I’d hate to see concrete. I’d hope it’s not that uniform boring business design which gets put in other parts,” he said.

Labour City West councillor Joe Leddin, whose ancestral home lies on the site, has welcomed the proposals. But he says he wanted to see more homes and fewer offices.

“I just think converting them to offices as opposed to refurbishing them for residential is a missed opportunity. We need good quality apartments for people who live in the city. We have good examples nearby whereby Georgian properties have been refurbished literally in the last few weeks and months for residential use. I think it’s a missed opportunity in that context,” Cllr Leddin said.

While notices have been erected along Catherine Street, it’s not clear when a decision will be made on the scheme. That’s because the developer – who was not available for comment – now has a fortnight to send the full planning application to the local authority.

Only then can a decision date be set.

The previous plans for the site, which were put forward by a consortium of local businessmen would have seen the demolition of 34 to 41 Catherine Street, as well as the buildings behind them.

They would have been replaced with six floors of commercial accommodation consisting of offices, street level retail, and 100 parking spaces.