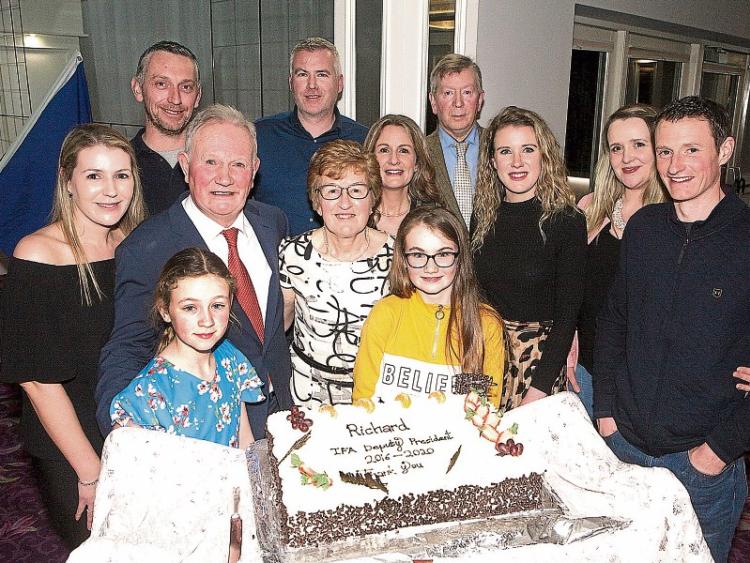 Richard Kennedy with family at the night in his honour

PRESIDENT Kennedy has a nice ring to it and if Richard had gone for the top job in the IFA he would have got the backing of everybody in the Woodlands House Hotel on Thursday night.

Over 250 attended a celebration night organised by Limerick IFA in recognition of his achievements as IFA deputy president. They came from as far away as Mayo and Cavan. They came for Richard Kennedy.

Michael Gabbett and Mike O’Flynn both gave stirring addresses about their friend.

Mr Gabbett said Limerick IFA wanted to thank Mr Kennedy for his sterling work on behalf of farmers in County Limerick and throughout the country, particularly during his period as deputy president of IFA.

“We also acknowledge the support he gets from his wife Helen and their family. Helen is Richard’s anchor, always ready to help and support him,” said Mr Gabbett.

When Richard courageously allowed his name to be put forward for election, encouraged by Mr O’Flynn, his campaign manager, Mary Ita Keane, and many others, he was duly elected deputy president.

“His main aim was to assist in fixing what was broke in IFA at that time. Members’ trust was severely weakened and they were questioning their membership of IFA. There is never an easy time to hold this position, but Richard’s term was doubly challenging because of the internal difficulties he had inherited, as well as the ever-changing ongoing challenges that farmers face.

“Together with newly elected president, Joe Healy, they steadied the ship, inspired confidence in membership, gave guidance to staff, and appointed a director general, Damian McDonald. These actions put IFA back on track. Richard’s role in that was immense.

“His track record for honesty, integrity, loyalty and, above all, his respect for others’ views made him acceptable as an honest broker in repairing our organisation which was damaged and floundering,” said Mr Gabbett.

Together with Joe Healy, John Coughlan and the team, they secured over €600 million extra for farmers during their tenure in office.

Rural crime was rampant and out of control and Mr Kennedy succeeded in focusing garda attention on it at the highest level.

“Recently, an intact and functioning organisation was handed over to a new president, deputy president and treasurer, our own Martin Stapleton. Richard’s courage and leadership skills, together with Joe Healy, John Coughlan, Munster chairman, and Angus Woods, livestock chairman, came to the fore last year in the crisis that has hit the beef sector with disastrously low prices not covering the cost of production.

“With very anxious and worried farmers wanting to hit out at factories and blockade them, IFA refused to sanction such action because they felt that a poor trade was better than no trade and successfully got a €100 million aid package in compensation to cover some of the losses. While the frustration did spill over and factories were blockaded, resulting in out of spec and overage cattle causing further losses, hindsight has confirmed that the IFA  stand was correct,” said Mr Gabbett.

In the 1990s, when he was Limerick IFA chairman, Mr Kennedy did organise and drive a blockade of a local beef plant when the true market price was not being returned to farmers.

“That blockade was lifted when a price increase was achieved. In that period, New Zealand lamb imports were also an issue resulting in Irish lamb being replaced in the local butchers and supermarkets by New Zealand lamb. In highlighting this he got himself arrested and a file was sent to the DPP.

“These actions confirm it wasn’t lack of courage or conviction on Richard’s part, but the wisdom to know the time and place to act,” said Mr Gabbett, who also highlighted Mr Kennedy’s role in organising the delivery of feed to farmers during the fodder crisis and went through his extensive career from their days together in Ballybrown Macra.

Another good friend, Mr O’Flynn said Mr Kennedy would have got the support of every man and woman in the room if he had wanted to run for IFA president.

“Richard is a true leader. He always brought people with him, he never had to look behind him to see if people were there - they were always there by his  side. It is a true mark of a man who is able to do that. His voice was always very well got. Whenever he spoke people listened. He is an excellent leader of people,” said Mr O’Flynn.

The last word went to the man himself.  Mr Kennedy prefers to hide his light under a bushel but he said he really appreciated the night.

“It was great for our family. The lads all really enjoyed it. It was great to be able to do something for charity and to bring people together. It worked out very well and people seemed to enjoy it. Great thanks to Limerick IFA for thinking of doing it,” said Mr Kennedy. He and Helen have six children - Anne Marie, Thomas, James, Elaine, Jane and Elizabeth - and six grandchildren.

Family comes first and after “four years of hard going” Mr Kennedy said he wants to spend more time at home in Clarina with Helen and their family.

Mr Kennedy said he didn’t have “an unhappy day” in the job and stressed that it was a team effort between the people who work in the IFA and all the volunteers.

The size of the crowd who came from near and far on a bad night in the middle of calving season reflects the esteem the dairy farmer is held.